The death and cult of King Louis XVI


Today is the 220th anniversary of the decapitation - the martyrdom - of King Louis XVI.

There is an account of the events of that terrible morning with descriptions and reminiscenses by some of those present which can be read here.

A fuller version of the extract from the memoirs of  the Abbe Edgeworth, the priest who accompanied the King to his death, can be read here.

The account of the King's death in The Times of January 25 1793 can be read here. It is prefaced by a very robust editorial, indicative of the British reaction to the French regicide.

In the latest version of this balanced online life of the King there is, towards the end, an account of the confirmation in 2012 of the survival of a relic of the King's blood in a gourd. It can be read here. There is more about the discovery in this article from the Daily Telegraph and in a piece from the BBC website here.

Prof. William Doyle has an interesting interpretive article in History Review about the significance or otherwise of the King's death in undermining the French monarchical ideal which can be read here. 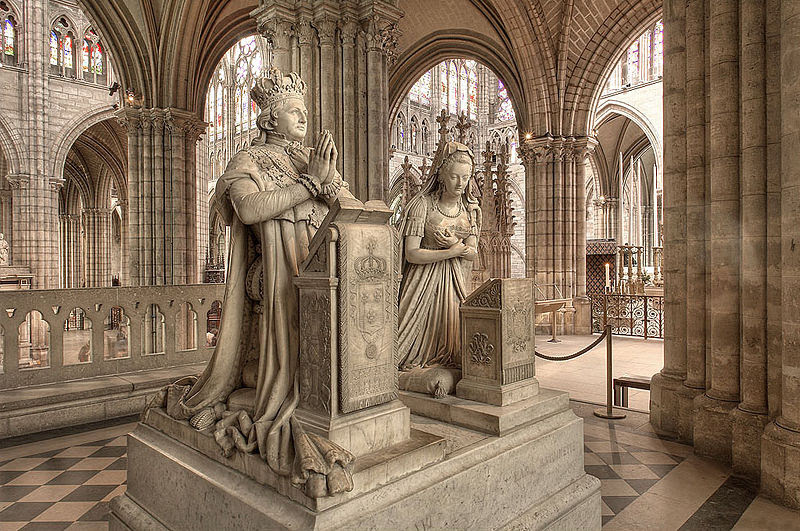 
There is an illustrated online article about the Chapelle Expiatoire commissioned by King Louis XVIII in 1816 and completed under King Charles X in 1826 on the site of the King and Queen's original burial place here.

"Son of St Louis go up to Heaven"

King Louis XVI Called to Immortality, Sustained by an Angel by François Joseph Bosio in the Chapelle Expiatoire


Although in 1820 the Church said that it was not possible to say that the King had been killed in defence of the Church rather than for political reasons his cult continued, and, following the political
and constitutional disasters that affected the country after 1830, devotion to his memory and that of his Queen and son flourished in the later nineteenth century. I was struck on my visit in 1992 to  Sacré Cœur in Paris (built 1875-1914) to see in the mosaics of the sanctuary vault the figures of King Louis XVI, Queen Marie Antoinette and King Louis XVII:

Today is one of the days on which I wear the fleur-de-lys badge I bought when in France in 2004 in my lapel as a mark of commmoration.