Today is the anniversary, the feast day if you will, of King Charles I.

King Charles I
A portrait  after Van Dyck


Now it is I think fair to say, as I did on this day last year, that King Charles I frequently failed to display the political acumen necessary for the times and circumstances in which he lived. This was in part due to his nature and temperament, perhaps influenced, as I suggested recently in two posts, by a sense of mentally looking over his shoulder to the memory of his elder brother Henry. He was inclined to seek refuge in what he thought ought to happen rather than what was actually happening. It is also fair to say that his government faced entrenched problems as well as opposition that proved obdurate.

However that is not the point of commemorating him as King and Martyr. 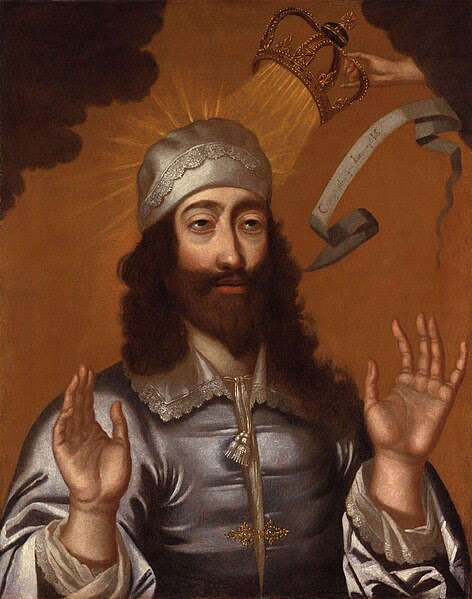 King Charles I - the Royal Martyr

A painting now in the National Portrait Gallery

It is not just respect and indeed awe at the way he approached his death, the martyrdom of a person, impressive and moving as that is in his case.

The King died as a martyr for the Church of England, and certainly for the most noble vision of it as a Catholically inclined national body. Had that vision not been preserved by the King's witness there would have been little chance of either the later seventeenth century flowering of Anglican devotion or of the impact of such ideas in generating the Oxford Movement  in the early nineteenth century. Today that vision seems to be the preserve of a minority, and a tradition valiantly upheld by the Society of King Charles the Martyr.  It is indeed appropriate that my old friends at Pusey House here in Oxford are marking the day with what they describe as a High Mass according to the Book of Common Prayer and veneration of a relic of the King.

The King died as a martyr for the Monarchy in that by refusing to compromise his rights and prerogatives in the negotiations in 1647-8 he avoided the destruction of its historic powers as an institution. The Restoration in 1660 was indeed that, the restoring of the traditional constitution, not of an enfeebled Crown.

The King died as a martyr for his people and the nation in that, as he pointed out at his trial, the people of England were not prosecuting him, but a radical military dictatorship who had seized power with Pride's Purge in 1648. Here again he reached out to the wider nation in defence of fundamental traditional rights - Subject and Sovereign might be clean different thing, but both were under threat from the clique who now sought to kill him.

My previous posts about this anniversary can be seen at The Royal Martyr , Post Mortem Patris Pro Filio and Col John Morris from 2011, and "Remember" from last year.