The Crown of the Netherlands

The announcement by the Queen of the Netherlands that she will abdicate the throne on April 30th in favour of her son the Prince of Orange appears to have taken people by surprise - and no bad thing in that.

Such a decision by Queen Beatrix should not, of course, really have caused surprise. Of the six Kings and Queens of the Netherlands only two, King William II in 1849 and King William III in 1890, have died in office, and Queen Wilhelmina, influenced by her own account of the abdication of the Emperor Charles V in 1556, established the modern practice of the Sovereign retiring in 1948. Indeed the present Queen's announcement is very similar in its timing to that by her mother Queen Juliana in 1980.

The text of Queen Beatrix's broadcast to her people is as follows:

As you all know I hope to celebrate my 75th birthday in a few days. I am grateful that I have been allowed to approach that day in good health. At the end of this year we will commemorate the 200th anniversary of our kingdom, a day which opens a new chapter in our history.

The coinciding of these two special events has been the reason for me to decide this year to resign from my office.

Until today, this beautiful task has given me a lot of satisfaction. It is inspiring to feel close to people, to sympathise in grievances and share times of joy and national pride.

It is with great confidence, that on April 30 this year I will pass my kingship to the Prince of Orange. He and Princess Maxima are fully prepared for their future task.

They will serve our country with devotion, faithfully serve the constitution, and with all their talents give substance to their kingship.

I hope I will be able to continue to meet many of you frequently. I am deeply grateful for the
trust you gave me during the many beautiful years I was allowed to be your Queen.


There is an informative blog article about the change of monarch which can be read here, and a profile of the future King here.

What makes this change of particular interest is that for the first time in 123 years there will be a King of the Netherlands. The last one was King William III who died in 1890 - a gap as long as that in this country between Queen Anne and Queen Victoria. Three long and essentially stable reigns of thre Queens regnant have contributed to the stability of the Dutch monarchy.

The House of Orange appear to operate very much as a family business, and are often, and doubtless unfairly, perceived in this country as a rather stolid family, whose public lives are periodically exposed to public scrutiny and criticism through their choice of spouse. The Orange dynasty has been intextricably involved with the history of the country ever since the career of William the Silent, and long may that continue. There is an online account of the Princes of Orange, the title and the original territory, as well as other claimants to that dignity here.

I recall that in 1980 that the majority of British newspaper coverage of the transition between Queen Juliana and Queen Beatrix even in the conservative press concentrated on the minority of the Dutch population who were critical of or opposed to the monarchy. On the day, of course, the vast majority were happy to celebrate the transfer of the crown.

From a British standpoint the House of Orange is descended from King George II, but if the brief engagement of the future King William II of the Netherlands and Princess Charlotte, daughter of the future King George IV, in 1814 led to their marriage and to children the ties might have been much closer. Had Charlotte lived to succeed her father in 1830 as Queen here she would have relinquished the Kingdom of Hanover, but maybe established a personal union with the Kingdom of the Netherlands - an intruiging possibility.

The new King will be inaugurated on April 30th. The Dutch monarch's ceremonial assumption of their kingship is a ceremonious occasion - one which stands in contract to the overworked cliche beloved of the media about the bicycling royal family.

The inauguration of Queen Beatrix in 1980
Image:Tindra_1 on Flickr

The ceremony is not a coronation as such, the crown and other regalia,  have never been physically bestowed upon any Dutch monarch. Queen Beatrix, like each of her predecessors, had an inauguration ceremony rather than a coronation. This was held at the Nieuwe Kerk in Amsterdam. The crown, orb  and sceptre, about which there is an online article here, were placed on cushions surrounding a copy of the Dutch constitution on a table facing the throne. The crown is seen as symbolising sovereignty and dignity, the sceptre authority and the orb the territory of the Kingdom. The other two regalia - the sword of state, symbolising power, and the standard of the kingdom bearing the coat of arms of the Netherlands - are carried by two senior military officers. These regalia have been in use since they were made for the investiture of King William II in 1840. The Queen, wearing the state mantle, was seated on a throne opposite them as she took her formal oath to uphold the kingdom's fundamental law. After the Queen took her oath, all members of the States General took an oath of loyalty to the new Queen.

On 30 April the Queen will sign the instrument of abdication in the Royal Palace, Amsterdam. The new King and the former Queen will then give a short address from the balcony of the Palace. Following the appearance on the balcony, the investiture of the new King will take place on the same day in the Nieuwe Kerk in Amsterdam. The ceremony takes the form of a joint session of the two Houses of the States General. During the investiture the new King is confirmed in office and swears to be faithful to the Constitution and to faithfully discharge the duties of his office. In return, the members of the two Houses swear to uphold the constitution and the rights of the monarchy. 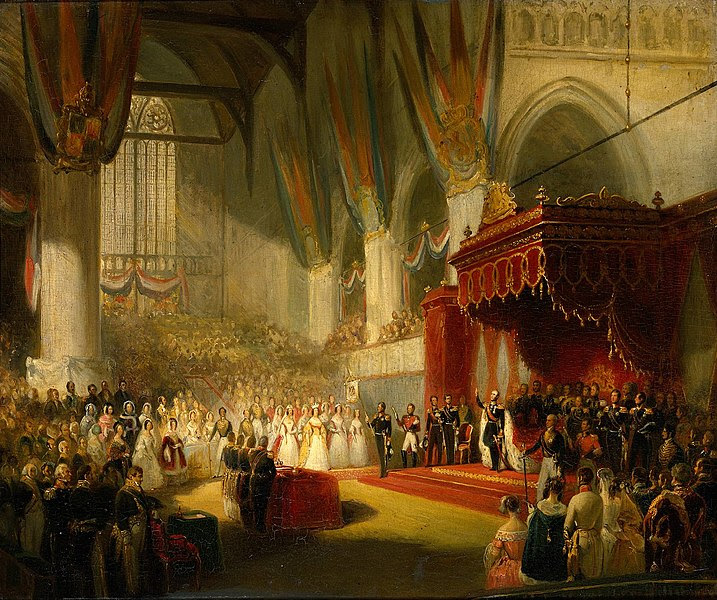 The Inauguration of King William II on November 28th 1840

News to us (as Expats) and very interesting as always! Thanks for the information, particularly the link!
God bless,