In the second of his Ford Lectures Prof. Blair spoke about landscapes of power and the siting of royal centres on influence and administration. He began by saying that some reviewers of his book on the Anglo-Saxon church had expressed the view that he had over- emphasised the importance of monastic centres and their material wealth at the expense of royal and aristocratic centres. He was, however, on reflection, still inclined to see the grandeur of the Anglo-Saxon church as being different from the less splendid surroundings of royal authority.

These centres were more ephemeral and adaptable. He cited first the site of Oakley in Dorset, where various sites near the Roman road and clustered around the landmark of Wor Barrow were given as sites of charter attestations and a record of the Provost of Chester-le-Street staying (copying out the Mass of St Cuthbert ) in a bishop's tent nearby in the tenth century. This was also a site with evidence of Anglo-Saxon executions.

Such spread out sites should, he believes, be understood as zones rather than places - a recognised meeting place where the King could camp, meet with local leaders, give grants and administer justice before moving on, returning as and when necessary, and with no permanent building, just a continuing tradition of visits.
That there were permanent royal residences where the King based himself while hunting was clear - notably the site at Cheddar. Rather grandly christened a palace by its excavator the complex had been less grand than such a title might suggest to modern ears. Such a centre could allow the itinerant ruler to combine the pleasures of the chase with administration. Cheddar is of course famous for the story of King Edmund I narrowly avoiding death in an accident whilst hunting above the gorge at Cheddar and restoring Glastonbury to St Dunstan. 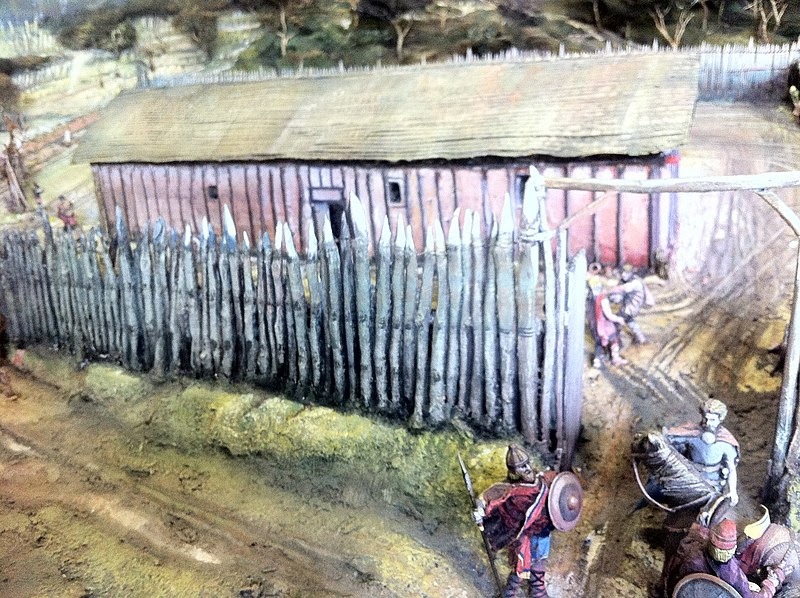 Reconstruction of Cheddar Palace circa 1000


The early seventh century site at Yeavering in Northumberland was similarly less of a permanent site than has perhaps been understood. Bede records its dismantling and the erection of a new royal centre at Milford nearby, and this may well have been the pattern with such sites.

A reconstruction of Yeavering in the early seventh century

Sites similar to Yeavering in their layout have been identified from Northumberland to southern England - one indeed identified from aerial photography had been hitherto mistakenly identified as a Roman villa.

Like his first example there were ones with as eries of chater attestations, chronicle references and archaeological evidence as well as indicators in place names which suggested recognised centres of royal governance that were flexible and physically impermanent.
Some of these sites had yielded valuable coins, suggesting the presence of wealth and trade. Such evidence was not always in the trading area. Thus Prof. Blair was inclined to see the evidence  of wealthy grave goods from burials in the Peak District as an indicator of the trade in lead from the area - citing such examples as St Wilfrid encasing the cathedral at York in lead in the seventh century - an d pointing to an ever increasing number of church buildings.There were sites which clearly indicated a relationship of trade and commerce with administration, and of settlements being planned as organised settlements for commerce. This was a society where material wealth was not just the preserve of the elites.His examples ranged across much of lowland England, suggesting a general pattern of such social and economic interaction.