Today has been our first full day on retreat as Brothers at Quarr Abbey.

The abbey was founded as a refuge from the French Third Republic by the monks of Solesmes in 1901, and used by them until their return to France in 1922. There is an illustrated account of the history of the abbey here. 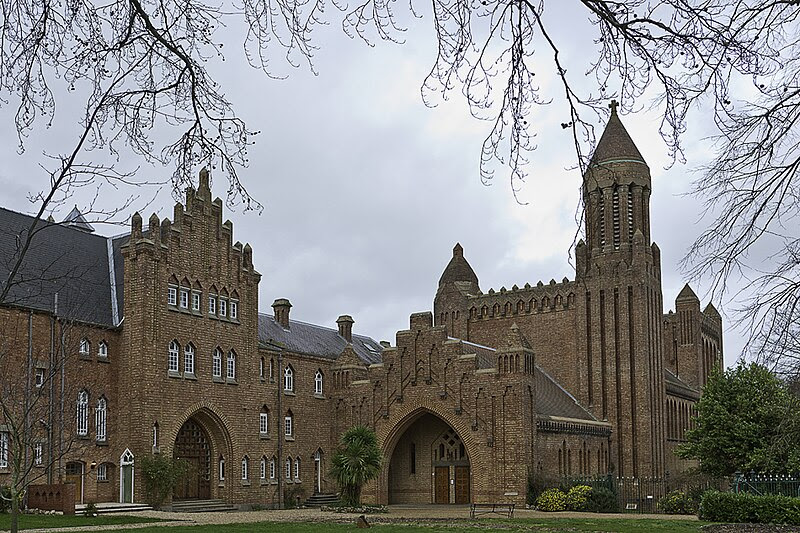 The abbey church from the west.
The Guest wing is in the range on the left.

The buildings were designed in 1908 by one of the monks, Dom Paul Bellot, and the church was built in 1911-12 as part of the second phase of construction. Dom paul was influenced by Moorish architecture in Cordoba, and his brick church is strikingly original. The low, attenuated nave leads into a large choir, and with the sanctuary placed under a short tower with transeptal chapels to north and south. The effect of the ever taller building - enhanced when incense rises from the altar at Vespers - is very dramatic indeed. 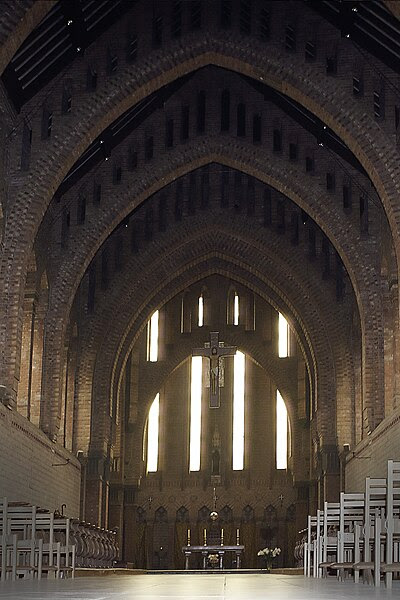 Today there are eight monks in residence, but a full observance of the monastic offices is maintained, using both Latin and English. I did not get to Vigils at 5.30 this morning, but I did attend Lauds at 7, and  Terce before the Conventual Mass at 9, as well as Sext, Nones, Vespers and Compline.

In 1963 the installation of a new abbot was the first occasion in this country that concelebration, other than for an Ordination, occurred at Mass here - so Quarr has a place in modern liturgical history.

This morning as retreatants we had our own Latin novus ordo Mass after the Conventual Mass. It was celebrated by Fr Jerome for the admission of Daniel Nicholls, an Oxford undergraduate, as our latest Brother.

After lunch - taken with the monks in the very impressive refrectory - and Nones we went for a walk in the drizzle to view the nearby remains of the medieval abbey. This was founded by Baldwin de Redvers in 1132, and was originally Savignac - a community which merged later on in the twelfth century with the Cistercians. In addition to Baldwin as founder the abbey also contained the grave of King Edward IV's second daugher Cicely, who was married off by her brother-in-law King Henry VII to his mother's half brother, John Viscount  Welles, about whose father, Lionel, who is buried in my home area, I have posted before. So here lies King Henry VIII's aunt.

The abbey was excavated in 1891 and the plan recovered, but the site invites further exploration and conservation - and this is clearly a concern to the present monks of Quarr.

Further along the path, which runs across the site of the monastic church, we came to Binstead, whose church preserves its medieval chancel and bell, but the remainder is a mid-nineteenth century rebuilding. In the graveyard is the recently cleaned and restored grave slab of Thomas Sivell who, at the age of 64,was shot on board his sloop in 1785 by Portsmouth Customs officers. The text of the inscription and old photographs of both abbeys at Quarr can be seen here.

You say there are now 8 monks in residence. How many were there at its height in the early 1960's?....and are new vocations joining them now?