Yesterday I travelled with my friend David Forster to attend the Latin Mass Society's Pilgrimage to St Winefride's Well at Holywell in Flintshire.

Last time I visited Holywell it was as child  in 1958, when the reigning Sovereign Pontiff was Pope Pius XII, and all I have as memory of that occasion is of standing by the well in what seemed a somewhat dank chamber. Other than that I know the shrine from photographs and by its historical significance as the one continuous place of pilgrinmage to survive from before the reformation, and as a remarkable piece of late medieval architecture.

There is an introduction to the history of the shrine here  and there is both pilgrimage information and more pictures from the Shrine's own website here.

Thomas Charles-Edwards life of St Winefride from the Oxford Dictionary of National Biography can be read here.

Pilgrims over the centuries have included King Henry V, King Edward IV, Fr Garnett and the wive sof the Gunpowder Plotters and King James II and Queen Mary Beatrice. An early nineteenth century visitor, if not actually apilgrim, was the future Queen Victoria. The beautiful shrine chapel and well chamber dates from the years afrter 1500 and is ascribed to either, or both, Lady Margaret Beaufort, who had estates in the area, and to Abbot Thomas Pennant of Basingwerk abbey, which controlled the shrine, and was a Cistercian house just below the shrine on the coast.

The shrine chapel and well with the ancient parish church above and to the left.
The buildings to the left and on the right of the foreground are nineteenth century 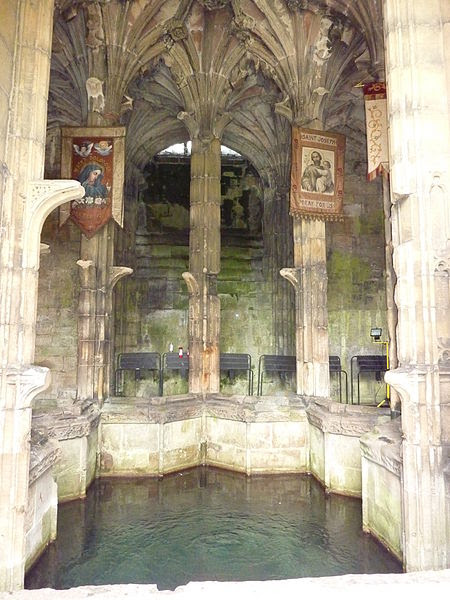 The Holy Well, looking towards the outer pool 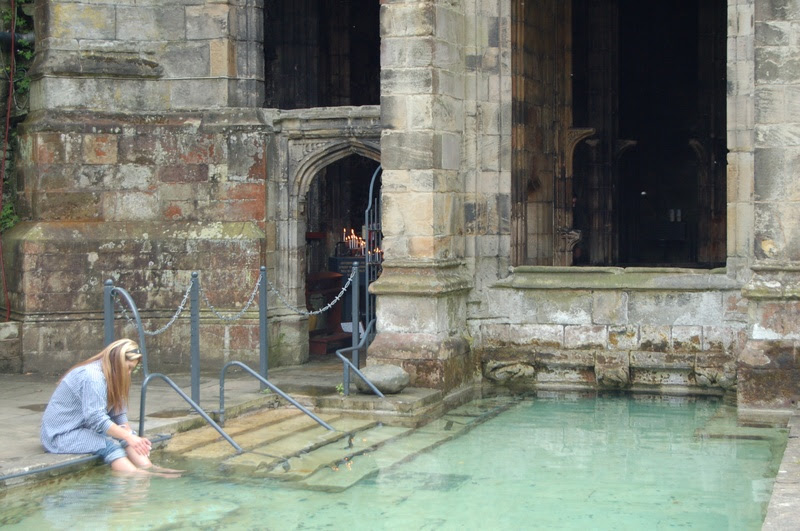 We made good speed on the journey and had plenty of time before the Pilgrinage Mass to visit the Well, light candles, look at the excellent Shrine information display and at the shop befre walking up the hill to the nineteenth century Catholic church to begin our formal devotions. The celebrant at the Mass was Bishop Rifan from Campos in Brazil, and the Mass itself was that of the Precious Blood.

There was a large congregation which filled the church - devotion to St Winefride is clearly still strong in the area and region - and there were several familiar faces from Oxford amongst the schola. 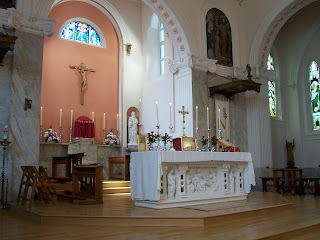 The Catholic church in Holywell where the Pilgrimage Mass was celebrated

After the Mass we formed up as a Rosary procession to walk dowm to the Shrine for the hymn and prayers to St Winefride, to venerate her surviving relic - part of a finger bone -and to be blessed by it, and to be individually greeted by Bishop Rifan.

The Relic of St Winefride in its silver monstrance.
Image:stwinefridewell.com

I am very grateful to David for suggesting our Pilgrimage, and for driving us both there and back safely. I think we both hope to return to this really quite remarkable place. If you have not visited, or still better, been as a pilgrim to Holywell, may I urge you to do so.

May St Winefride continue to pray for us.