It was 375 years ago today, on July 23 1637, that the new Scottish Prayer Book was introduced, an event which led to the Solemn League and Covenant, the Bishops Wars between England and Scotland, the calling of the Short Parliament and then of the Long Parliament, and the descent into Civil War of all three of King Charles I's realms.
the most famous protest was of course in St Giles Cathedral in Edinburgh when Jenny Geddes threw her three lefgged stool at the head of the Dean when he was saying the service, as she yelled " Are you saying Mass at ma lug?" Trouble was clearly expected - the Bishop of Brechin carried a pair of loaded pistols with him into the pulpit. The type of religious settlement favoured by the King, building on his father's Articles of Perth, had been indicated by his coronation service at Holyrood in 1633, but it failed, tragically, to find favour with many of his subjects in Scotland. 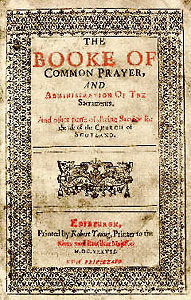 The Booke of Common Prayer 1637
Image:Wikipedia, from Scotland, A Concise History, Fitzroy Maclean, 1991
There is an article about the Book, with illustrations and links to the texts of the various Scottish Liturgies from the Justus Anglican resources website here.