Today is the 150th anniversary of the boat trip and picnic on a ""golden afternoon" from Oxford to Godstow on July 4th 1862 which inspired Charles Dodgson, othewise known as Lewis Carroll, to tell the stories to Alice Liddell which he published in 1865 as Alice's Adventures in Wonderland, and followed in 1871 with  Through the Looking Glass.They are stories I was brought up on as a child and which retain their appeal to adults because of their depth and sheer delight and quirkiness. How often do we not refer to images that derive from these two childeren's stories in commenting on the world around us?The inspiration Dodgson found in his life in and around Christ Church as a mathematics don and in the life of the Liddell family and their friends and contacts can be discerned and give both books their continuing appeal to different age groups - the have become part of our wider heritage across the English speaking world. 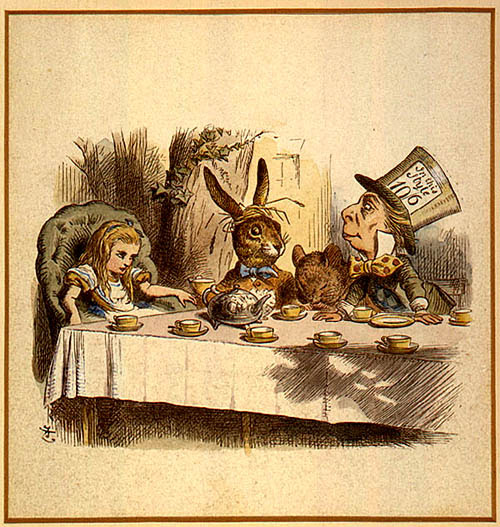 Mind you, although I am sure the Rev. Mr Dodgson's interest in childen  was entirely innocent I fear that in today's Nanny State he would run the risk of a visit from the Thames Valley Police, the Child Proterction Agency and Social Services.

How life has changed...Our society is more inclined to believe anyone is guilty until proved innocent! I too can relate to these stories being something like the (always) running rabbit 'I'm late, I'm very late'!
Thanks for sharing and Blessings to you,