In addition to being the opportunity to wish readers a happy New Year - and that seems more than a seasonal platitude but an ever more ardent wish in the troubled state of the world - today is traditionally the feast of the Circumcision of Our Lord, and now retitled in the novus ordo the Solemnity of Mary Mother of God. Both titles - and I do not see why the older could not have been retained alongside the newer emphasis on Our Lady - point to the rootedness of the Incarnation in the traditions of Israel, its law and obligations ( e.g. circumcision) and its people ( Mary as the ultimate representation of the Chosen People )

John Dillon has posted a selection of images of the Circumcision of Our Lord on the Medieval religion discussion group as well as an introduction to the history of today's feast(s) as follows:

In the General Roman Calendar 1 January is the feast of Mary, the Mother of God. Greek Orthodox churches celebrate the Synaxis of the Holy Theotokos on 26. December. Neither date works as an anniversary of the adoption of Mary's designation as Theotokos ("Mother of God") by the Council of Ephesus (held in June and July 431); both bespeak rather a desire for a specifically Marian commemoration within the octave of the Nativity.

Whereas this feast is attested from sixth-century Rome, for most of the western Middle Ages 1. January was principally the dayof the Feast of the Circumcision, a fourth-century feast in the east
that seems to have been adopted in Rome in the seventh or eighthcentury and that lasted on the general Roman Calendar from the latter's late sixteenth-century inception until its revision of 1969. The Circumcision of Jesus, mentioned only circumstantially in the revised Roman Martyrology's laterculus for today's Solemnity of Mary the Mother of God, remains a focus for the feast of the Circumcision celebrated on this day in Byzantine-rite churches and, as that of the Naming and Circumcision of Jesus, in churches of the Anglican Communion. According to Luke 2:21, a traditional reading on this feast, Jesus' circumcision on the octave of his birth was the occasion of His naming. Re-titled and re-imagined as that of the Holy Name of Jesus, the feast so construed is celebrated on 1 January in yet other churches and on 3 January in the Roman Catholic Church.

Herewith some links to period-pertinent images of the Circumcision of Jesus:
a) as depicted in the late tenth- or very early eleventh-century
so-called Menologion of Basil II (Città del Vaticano, BAV, cod. Vat.
gr. 1613, p. 287): 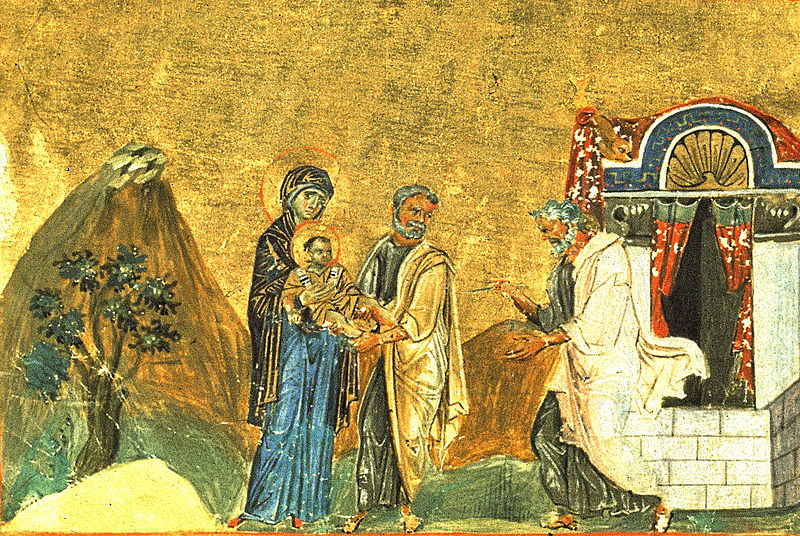 http://commons.wikimedia.org/wiki/File:Menologion_of_Basil_047.jpg
b) as depicted by Nicholas of Verdun on an enameled plaque of his late twelfth-century altarpiece (c. 1181) for the abbey of Klosterneuburg near Vienna: 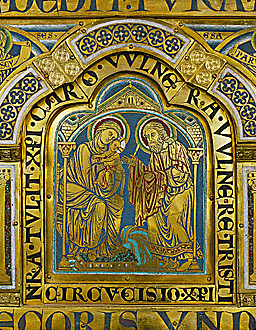 http://www.wga.hu/art/a/angelico/11/armadio8.jpg
q) as depicted in a later fifteenth-century glass window panel (c.
1460-1470) from Köln in The Cloisters Collection of the Metropolitan
Museum of Art, new York:

http://www.ipernity.com/doc/laurieannie/35821507
r) as depicted in a later fifteenth-century glass window (c.1467-1469; w. 2) in the cathédrale Notre-Dame in Évreux:
http://therosewindow.com/pilot/Evreux/w2-B2-whole.htm
s) as depicted by Michael Pacher in a panel painting on a wing of his later fifteenth-century St. Wolfgang Altarpiece (centre completed,1479; wings completed, 1481) in the Wallfahrtskirche St. Wolfgang in Wolfgangsee (Land Salzburg): 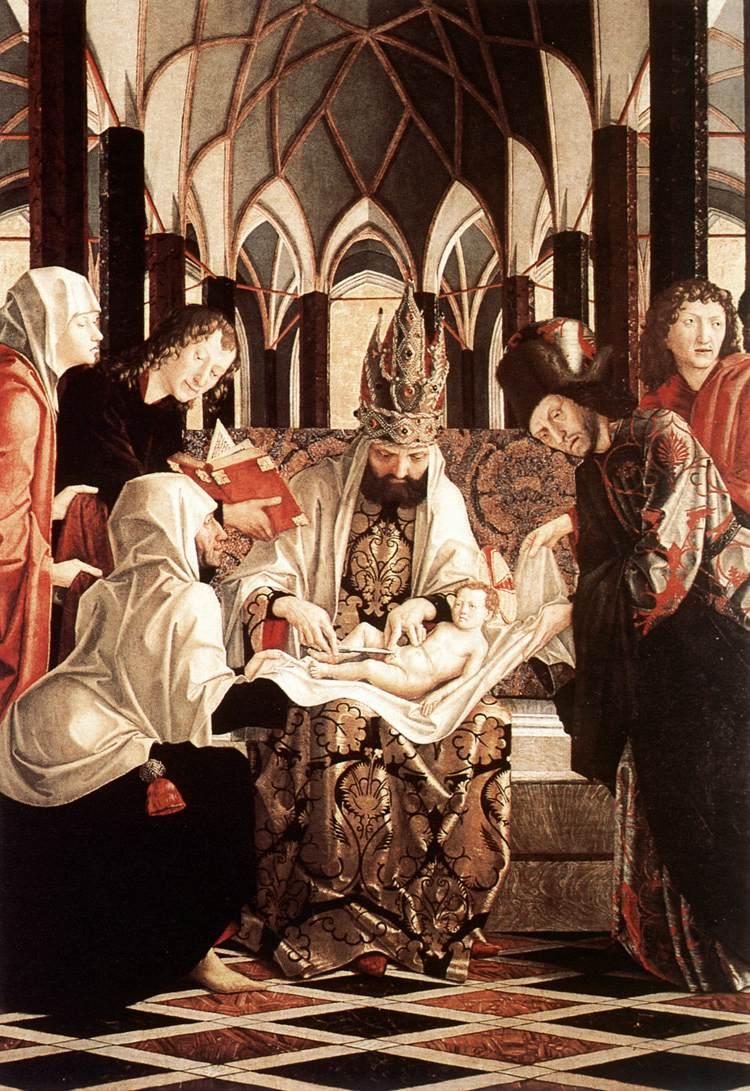 http://tinyurl.com/gssatd9
t) as portrayed in polychromed wooden figures from a later fifteenth-century altarpiece from Brabant (c. 1480) in the Bode-Museum, Berlin:

http://tinyurl.com/jxvjtw3
u) as depicted by the Elmelunde workshop in the late fifteenth-century paintings (c. 1481) in Fanefjord Kirke, Fanefjord, Vordingborg Kommune, Sjælland:

http://ica.princeton.edu/images/mills/08-027.jpg
v) as depicted by a follower of Willem Vrelant in an illuminated initial in a late fifteenth-century Hours of the BVM (c. 1490; Den Haag, Museum Meermanno, ms. 10 F 1, fol. 98v):
http://manuscripts.kb.nl/zoom/BYVANCKB%3Amimi_mmw_10f1%3A098v_init
w) as depicted by Hugues Le Coq (possibly from cartoons by Pierre Spicre) in a late fifteenth-century tapestry of the Life of the BVM (in five separate segments, of which the last is dated 1500) in the
collégiale Notre-Dame in Beaune:
https://www.flickr.com/photos/morio60/23293556706
x) as portrayed by Jörg Ratgeb in an earlier sixteenth-century fresco (c. 1514-1521; restored, 2009) in the cloister of the former Carmelite monastery in Frankfurt am Main:
https://www.flickr.com/photos/hen-magonza/6987921695/
y) as portrayed by Jean Soulas in an earlier sixteenth-century set of stone sculptures (1521-1535) on the choir screen of the basilique cathédrale Notre-Dame in Chartres:

https://enthusiastical.files.wordpress.com/2013/05/dsc02098.jpg
z) as portrayed in polychromed wooden figures on an earlier sixteenth-century altarpiece from Antwerp (c. 1535) showing scenes from the Life of the Virgin and the Infancy of Christ, now in the Museo Civico d'Arte Antica (Palazzo Madama) in Turin: