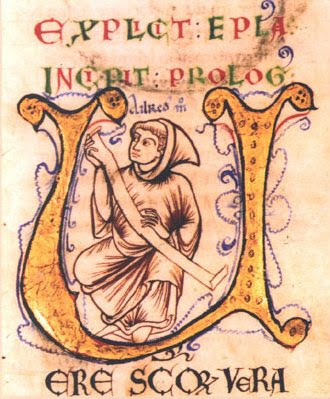 We know about diplomat, abbot, theologian, hagiographer, and historian Ailred (d. 1167; also Ælred, Aelred, Ethelred) chiefly from his own writings and from a Vita by his secretary and medical attendant, Walter Daniel (BHL 2644as). He was born in Hexham to a priestly family of Northumbria, was educated there and possibly at Durham, and was a courtier of David I, King of Scots, before entering the Cistercian abbey of Rievaulx in the early or middle 1130s. In 1143 Ailred became the first abbot of Rievaulx's daughter house at Revesby in Lincolnshire. In 1147 he was elected abbot of Rievaulx. He greatly increased the number both of monks and of lay brothers and added buildings to accommodate them, including a new abbey church, cloister, and ranges. His writings (the major ones at least; also the letter on the nun of Watton) are too well known to require a summary here.

Ailred was buried at Rievaulx and enjoyed a medieval cultus there (perhaps to accommodate his shrine, the abbey church was enlarged in the 1220s) and at other houses of the Cistercian Order. The latter listed him among its saints at its general chapter of 1250 and in 1476 approved his liturgical commemoration. Never canonized Papally, he is venerated as a saint by his order, by others in the Benedictine family, and in churches of the Anglican Communion. Ailred entered the Roman Martyrology in its revision of 2001 and is there called Saint.


There is more about the history and architecture of Rievaulx abbey and pictures of the remains at the following sites:http://tinyurl.com/762nr7, http://www.english-heritage.org.uk/visit/places/rievaulx-abbey/ and http://www.english-heritage.org.uk/visit/places/rievaulx-abbey/history/description/
I posted about St Ailred in 2011 in St Ailred of Rievaulx, which gives a fuller biography of him and links to other sites, s well as some reflections on aspects of his work on Christian friendship.

Hi just joined your page, I am so interested in, I was baptized to the Catholic faith but now a days I Believe in one Entity and worship and learning to appreciate about different faiths for personal reason, I live with a man who is very christen but we have been on many Faith opportunities. I look forward to reading while listening to amazing classical masters my father showed me to appreciate. Cheer! to a better healthier world. Lisa B