Today is the feast of St Vincent, whose depiction in art I have featured before but this year Gordon Plumb and John Dillon have provided a most impressive series of pictures of the saint's story on the Medieval Religion discussion group. Many of these are very interesting as to what later medieval life and liturgy were like, and hence this rather lengthy post. Larger views of the pictures I have posted can be obtained by clicking on the appropriate link at the bottom right.

Gordon Plumb started the series of images as follows:


John Dillon then posted his selection, again with an introduction to the cult:

A popular martyr of early Christian Iberia, Vincent (d. 304?) was a deacon at Zaragoza (a.k.a. Saragossa) who did a lot of preaching for his Bishop, Valerius.  The latter (in some accounts) had a speech impediment.  At the outbreak of the Diocletianic persecution they were both arrested and hauled off to Valencia, where they were imprisoned pending a hearing.  When that hearing came, Vincent did most of the talking and spoke so ably that the presiding magistrate concluded that the really dangerous one was the deacon, not the bishop.  Consequently, Valerius was exiled but Vincent remained in prison, where he underwent a series of tortures before being executed.Early witnesses to Vincent's cult include St. Paulinus of Nola, Prudentius, and St. Augustine of Hippo.  The last named eulogized Vincent annually on this day and we have from his pen no fewer than six sermons celebrating this saint.  Vincent's Passio in its standard form (BHL 8631) was in existence by the middle of the sixth century.  A briefer text (BHL 8638) may be close in content to a Passio that circulated in the fifth century.  On Vincent's early medieval cult in general, with editions of major texts, see Victor Saxer, Saint Vincent diacre et martyr: Culte et légendes avant l'An Mil (Bruxelles: Société des Bollandistes, 2002; Subsidia Hagiographica, vol. 83).Some period-pertinent images of Vincent of Zaragoza (or, if you prefer, of Saragossa; also V. of Huesca, V. of Valencia, and V. the Martyr) :a) as depicted (third from left; after Sts. Demetrius and Polycarp) in the heavily restored, later sixth-century mosaics (c. 561) in the nave of Ravenna's basilica di Sant'Apollinare Nuovo:http://tinyurl.com/2foe88ub) as depicted in the late tenth- or very early eleventh-century so-called Menologion of Basil II (Città del Vaticano, BAV, cod. Vat. gr. 1613, p. 342): 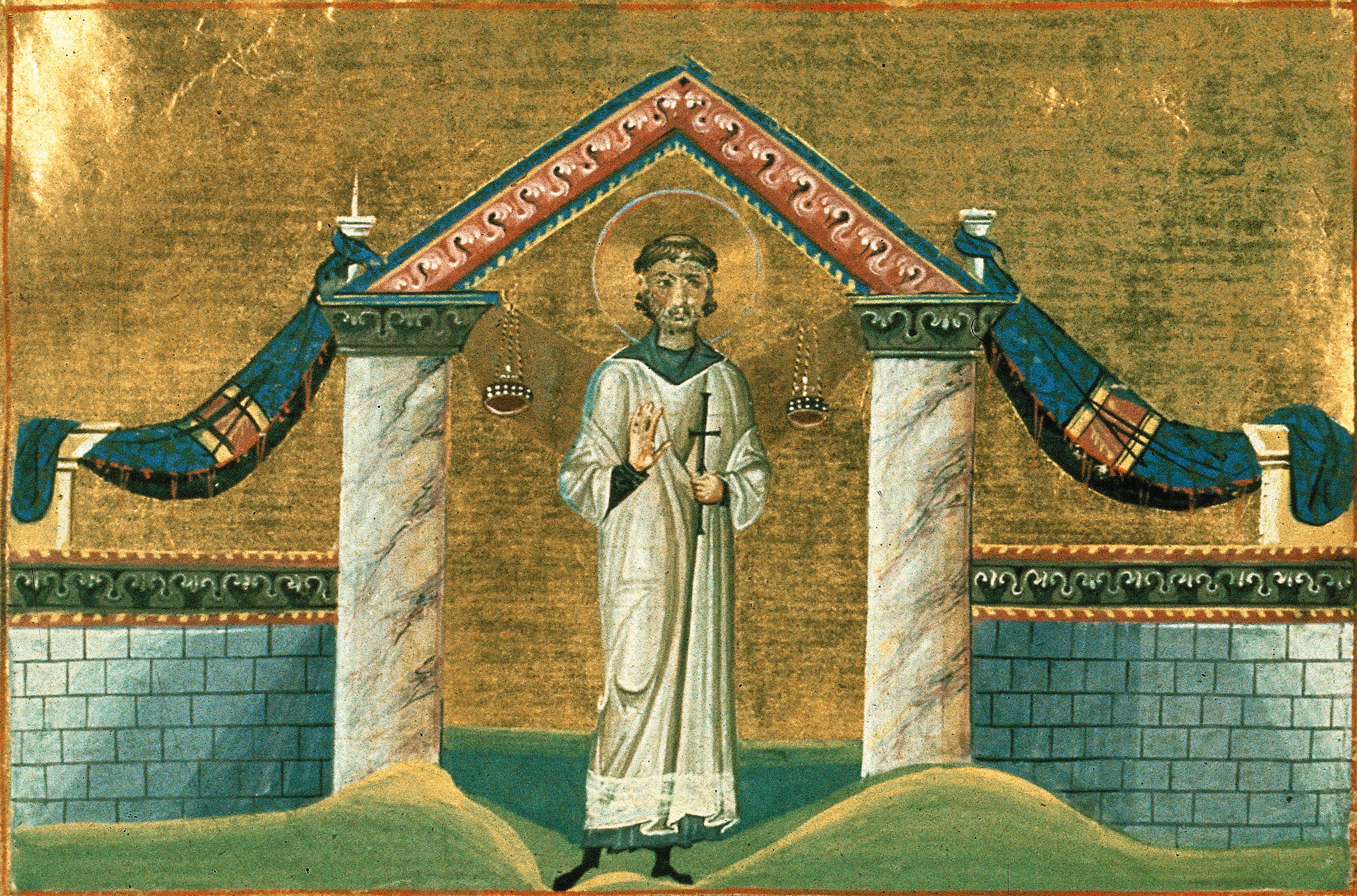 http://www.wga.hu/art/zgothic/mosaics/3cefalu/6cefalu.jpg
This second view  is greatly expandable:
http://www.christianiconography.info/sicily/latinSaintsCefaluCathedral.jpg
g) as portrayed (martyrdom scenes) in a perhaps later twelfth-century relief (after c. 1160) in the Münster in Basel: 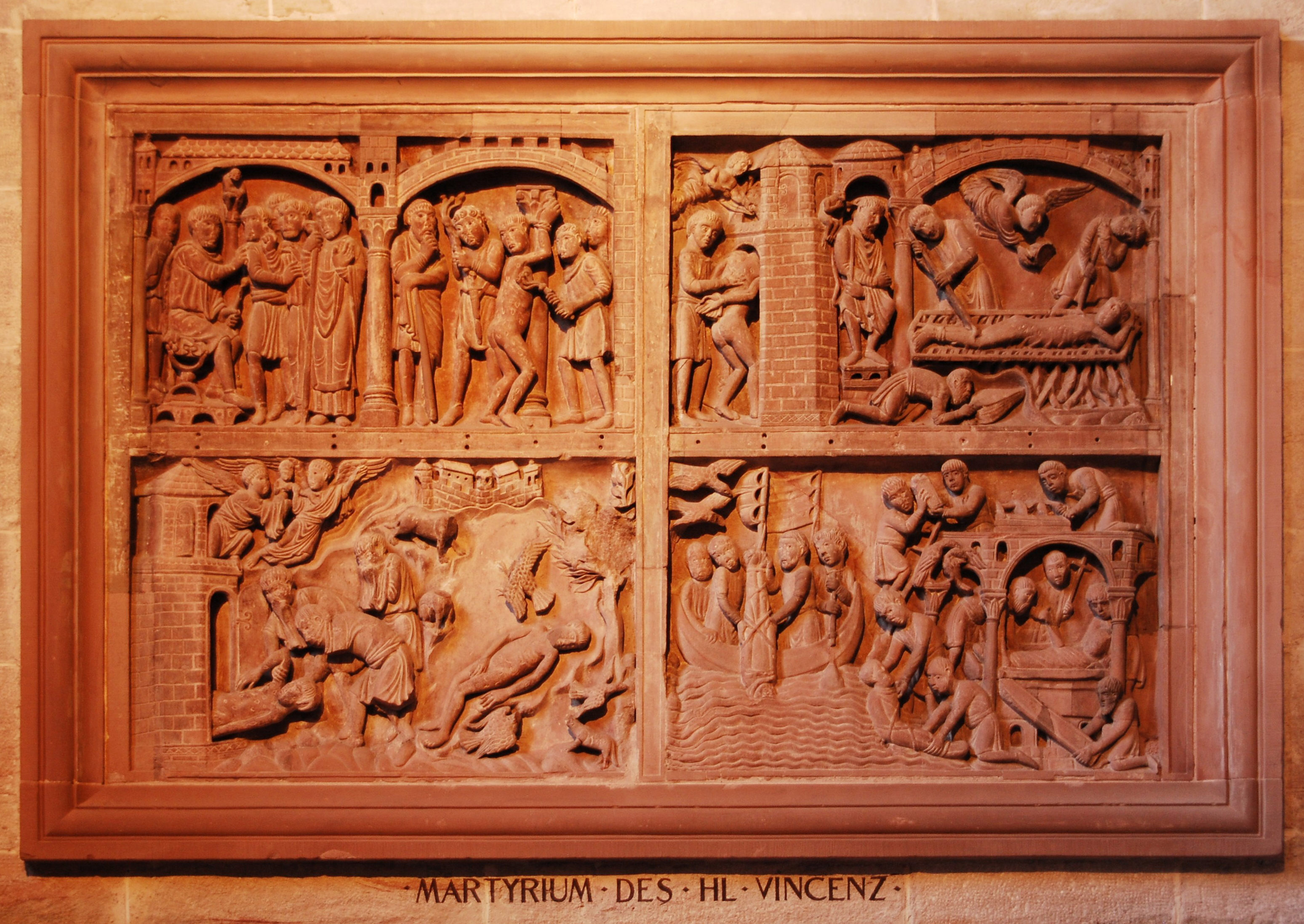 http://tinyurl.com/zqfu6yl
h) as depicted (at right; at left, St. Victor of Syria) in the later twelfth-century frescoes (1164) in the church of St. Panteleimon (Pantaleon) at Gorno Nerezi (Skopje municipality) in the former Yugoslav Republic of Macedonia:http://tinyurl.com/h2jgbg4In Byzantine-rite churches both Victor and Vincent are celebrated on 11. November (in the Synaxary of Constantinople Vincent also occurs by himself under 22. January). That is also the feast day of St. Men(n)as the Egyptian, whose church in Constantinople is reported from the twelfth century as possessing relics of Vincent and Victor.i) as portrayed in high relief (scenes) on his late twelfth-century polychromed stone cenotaph in the Basilica de los Santos Hermanos Mártires, Vicente, Sabina y Cristeta in Ávila:http://tinyurl.com/z6fnpkahttp://tinyurl.com/h5g48nc
The Clever Boy would add that these are a wonderful series of pictures of late Romanesque sculpture which has retained its paintwork - a delight to peruse.j) as depicted (martyrdom) in one of four panels of a full-page illumination in the late twelfth-century so-called Bible of Saint Bertin (c. 1190-1200; Den Haag, KB, ms. 76 F 5, fol. 28v, sc. 1B):http://manuscripts.kb.nl/zoom/BYVANCKB%3Amimi_76f5%3A028v_min_b1k) as portrayed in high relief (birds guarding his corpse at sea) on the left pillar of the left portal of the late twelfth or early thirteenth-century south porch (by 1210) of the basilique cathédrale Notre-Dame in Chartres:

http://tinyurl.com/mctmt3h
l) as depicted (scenes of his life and martyrdom) in the early thirteenth-century St. Vincent window (bay 12; c. 1215) in the ambulatory of the cathédrale Saint-Étienne in Bourges:http://www.medievalart.org.uk/bourges/12_pages/Bourges_Bay_12_key.htmm) as depicted (scenes from his Passio) in panels from a mid-thirteenth-century glass window (1240s; from the abbey church of Saint-Germain-des-Prés in Paris) in the Walters art Gallery and Museum, Baltimore:http://art.thewalters.org/detail/77393/stained-glass-window-with-scenes-from-the-life-of-saint-vincent/Gordon Plumb's post has links to other panels from the same window in the Victoria and Albert Museum in London and the Metropolitan Museum of Art in New York.n) as depicted (martyrdom) in a panel of a mid-thirteenth-century ambulatory window (Bay 201, panel A1; c. 1254) in the cathédrale Saint-Julien, Le Mans:http://www.medievalart.org.uk/lemans/Clerestory/jpeg/Le_Mans_Bay_201_Panel_A1.jpgo) as depicted (scenes of his life and martyrdom) on a later thirteenth-century altar frontal (parchment over wood; from the church of Santa María de Monte at Liesa [Huesca]) in the possession of the Diputación Provincial de Huesca (for better views click on the individual frames): 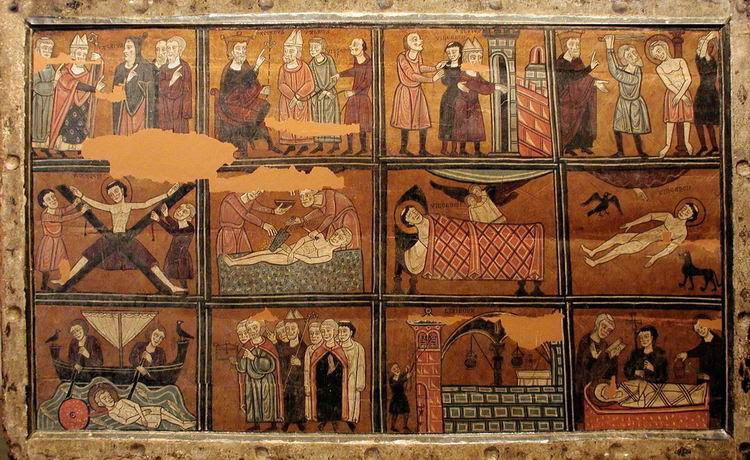 http://www.liesa.info/frontal.htm
p) as depicted (sixth from left, after an archangel, St. Peter, the Christ child, the BVM, and St. Paul; the remaining two are St. Ambrose of Milan and St. Augustine's son Adeodatus, venerated in medieval Milan as a saint) in a later thirteenth-century fresco on the parapet of the Gospel ambo in the basilica di San Vincenzo in Galliano, a _frazione_ of Cantù (CO) in Lombardy:http://tinyurl.com/mf7gqksDetail view (Vincent): 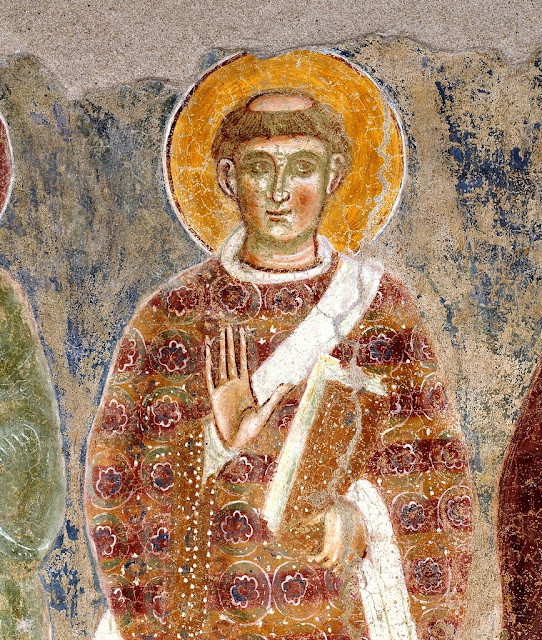 http://www.museunacional.cat/sites/default/files/003940-CJT.JPG
y) as depicted (the finding of his body) in a late fourteenth- or early fifteenth-century copy of the Legenda aurea in its French-language version by Jean de Vignay (Rennes, Bibliothèque de Rennes Métropole, ms. 266, fol. 48v):http://tinyurl.com/jqau7dcz) as depicted (his body about to be cast into the sea) in an early fifteenth-century copy of the Elsässische Legenda aurea (1419; Heidelberg, UB, Cod. Pal. germ. 144, fol. 295v):http://digi.ub.uni-heidelberg.de/diglit/cpg144/0614aa) as depicted (at left, martyrdom; at right, St. Vincent Ferrer) by Bernard (Bernat) Martorell in an earlier fifteenth-century panel painting in the State Hermitage Museum, St. Petersburg: 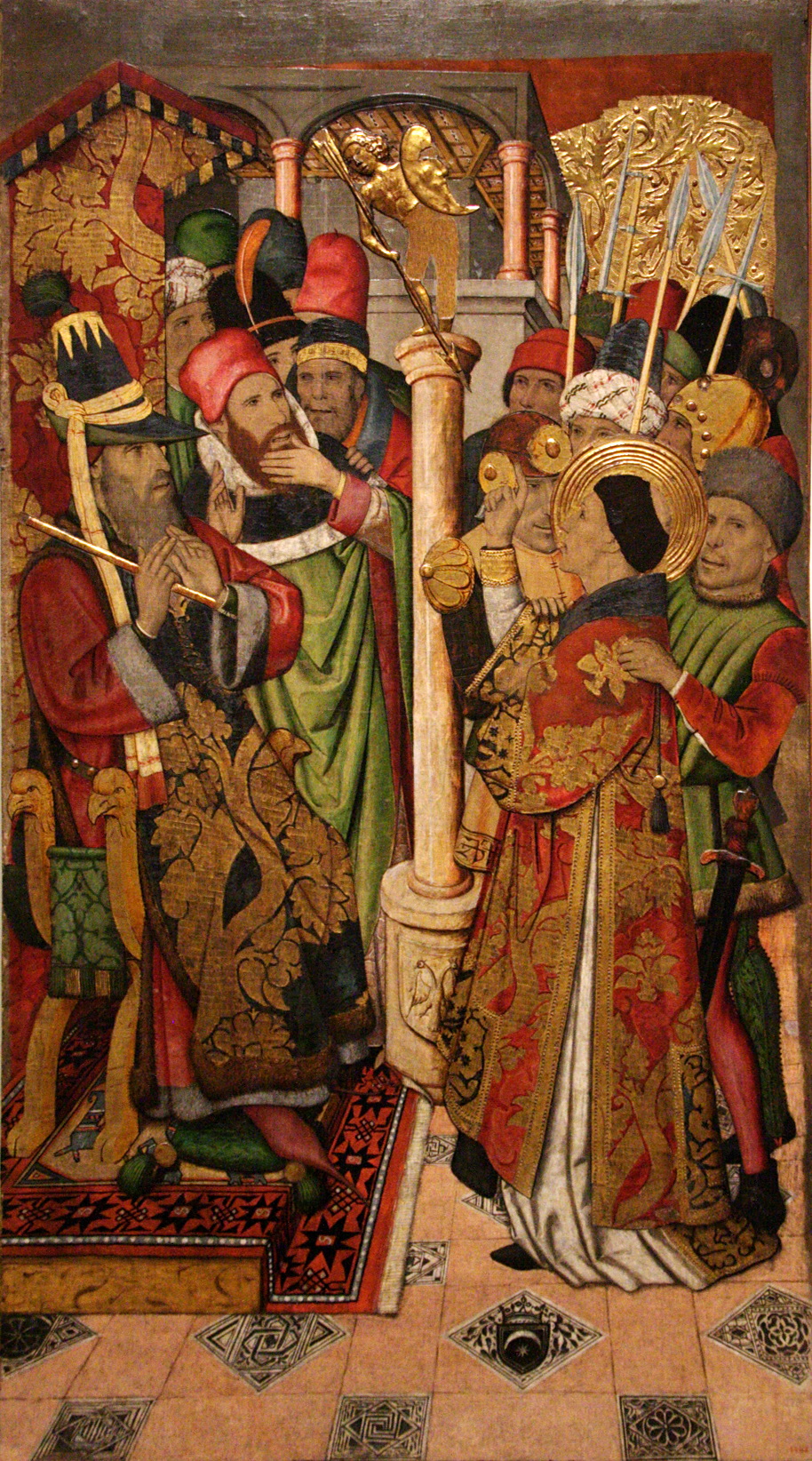 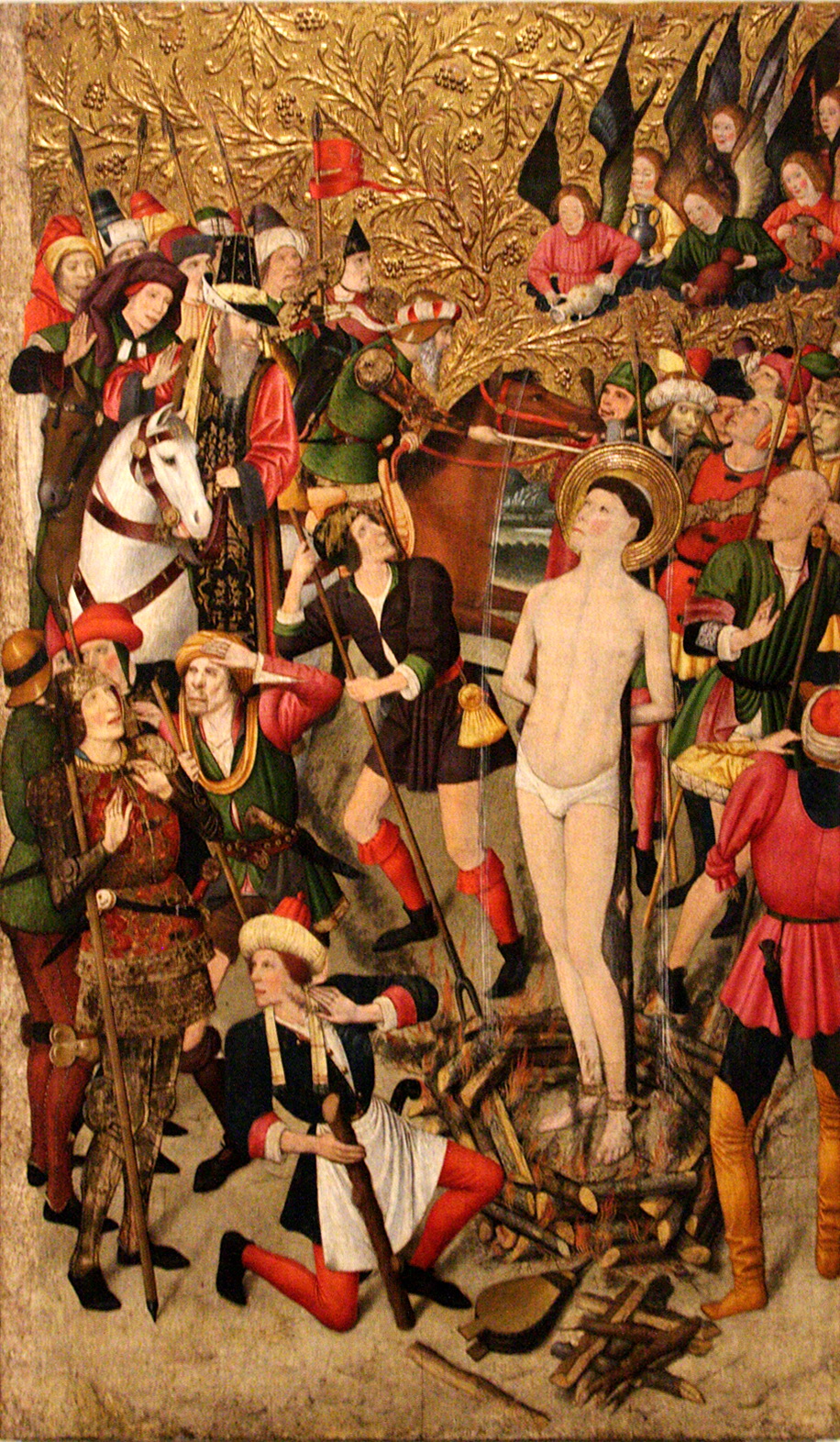 http://tinyurl.com/jd68ouh
5) Seekers for cures at his tomb:

ff) as depicted by Tomás Giner in a later fifteenth-century panel painting (between 1462 and 1466) in the Museo del Prado, Madrid:

http://tinyurl.com/zrqbm94
gg) as depicted (at left; at centre, St. James the Great; at right, St. Eustace) by Antonio and Piero del Pollaiolo in a later fifteenth-century panel painting (c. 1466-1468) in the Galleria degli Uffizi, Florence:http://tinyurl.com/hu4or78

http://www.shafe.co.uk/wp-content/uploads/pollaiuolo_three_saints_altarpiece_1466.jpg
hh) as depicted (martyrdom) in a late fifteenth-century copy of the Legenda aurea in its French-language version by Jean de Vignay (c. 1480-1490; Paris, BnF, ms. Français 244, fol. 54v):http://tinyurl.com/ydw94leii) as depicted (at centre, between St. Michael the Archangel and St. Lawrence of Rome) in the central panel of the late fifteenth-century retable in the iglesia de San Vicente Mártir at San Vicente de Labuerda in Labuerda (Huesca): 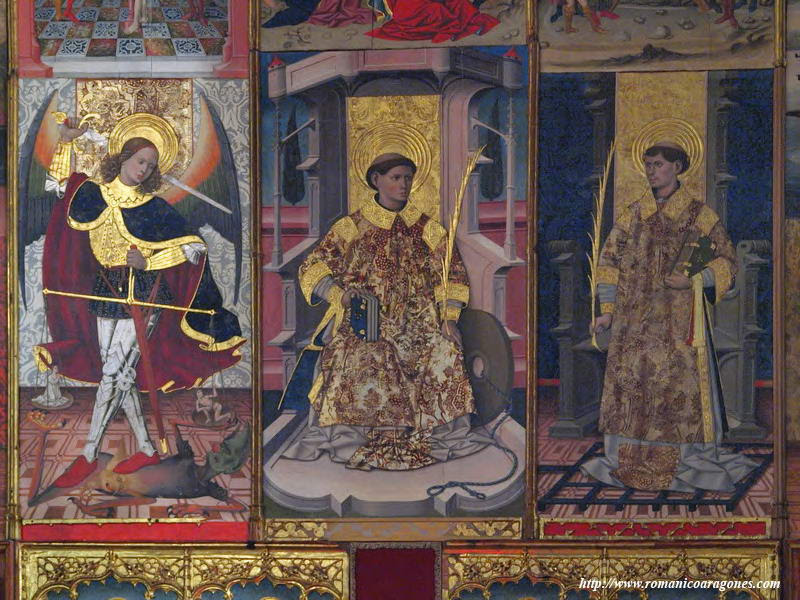 http://www.romanicoaragones.com/1-Sobrarbe/SVicenteLabu%20G24.jpg
jj) as portrayed in relief (image at right) on a guldiner of 1493 from Bern:http://tinyurl.com/lfxwdh4kk) as depicted (martyrdom) in the earlier sixteenth-century portion (c. 1540) of a window in the église Saint-Ouen at Pont-Audemer (Eure):
http://tinyurl.com/l29vh9d


5) as depicted by the Portuguese artist Frei Carlos (attrib.) in an earlier sixteenth-century panel painting (c. 1520-1530) in the Metropolitan Museum of Art, New York. The Museum website can be seen here: http://www.metmuseum.org/collection/the-collection-online/search/435847