A day in the City of London

Yesterday I joined other members of Oxford University Heraldry Society on a visit to London.

I took the train to Paddington, and was struck once again on the journey by the ugliness of electrification - it does nothing at all for the landscape. The third rail method is far more desirable on visual grounds.

Having got that off my chest, back to the day in London. We met at All Hallows-by-the-Tower (sometimes known in the past as All Hallows Barking because the advowson belonged to the Essex abbey)

It is one of eight City churches that survived the Great Fire of 1666, but it was bombed in the Second World War and subsequently restored in that somewhat peculiar way that was adopted for many of the City churches in that instead of reconstructing the church as it had been the architects were given something of a free hand and allowed in part to produce an adaptation of the previous work. The spire is, for example, a post WWII addition - and works well. I am less sure about the design of the east window. Nevertheless it is a handsome building, rich in historic associations.


It is claimed as the oldest church in London, and in the crypt, is a pavement of Roman date from the second century: The crypt has a fascinating display of Roman and Anglo-Saxon remains from the site and others in the City as well as a model of Roman London. 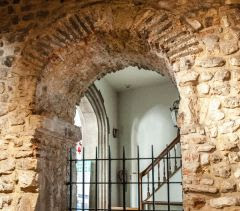 At the west end is the oldest surviving piece of church building in London, a Saxon arch dated to about 675 or possibly a bit later. Built of stone and Roman tiles it is an impressive link to the early history of Christian London. 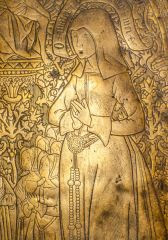 
Being close to the site of the scaffold on Tower Hill it was occasionally the burial place of victims of the headsman, including, briefly, St John Fisher and until his removal to Oxford at the Restoration of Archbishop William Laud. It has strong American associations being the place of baptism of William
Penn and where John Quincy Adams was married whilst serving as US Ambassador to the Court of St James. The font cover by Grinling Gibbons

The modern stained glass is rich in armorials - hence our visit from the  OU Heraldry Society.

They are the oldest Regiment in the British Army, originating as Guild of St George, and apparently drawing upon earlier antecedents, chartered by King Henry VIII in August 1537. Because of their similar date of foundation they maintain fraternal links with the Papal Swiss Guard.

In addition to being a Territorial or Reserve Regiment, who also who fire gun salutes at the Tower of London on appropriate occasions, and a force of Special Constables in the City of London, they also maintain the ceremonial Company of Pikemen and Musketeers, established in 1925  who parade in seventeenth century style armour and uniform on appropriate occasions and a Light Cavalry who provide ceremonial escorts at events such as the Lord Mayor's parade.

Crest and Motto of the Honourable Artillery Company


We lunched in the Long Room, part of the oldest part of the complex and built in 1735. After lunch we toured other rooms and the museum and some of us were shown the armoury with the Pikemen and Musketeers armour hanging up ready for their next appearance.

Having finished our tout i walked with another OUHS member back into the City. I had thought of exploring places I had not visited hitherto and he kindly guided me, the country mouse, so to speak. Working our way past the Bank of England, Royal Exchange and Mansion House we went through the impressive Victorian survival of Leadenhall Market to look at the remains of the church of
All Saints or All Hallows Staining. The parish was amalgamated with St Olave Hart Street and the church other than the medieval tower demolished in 1870. 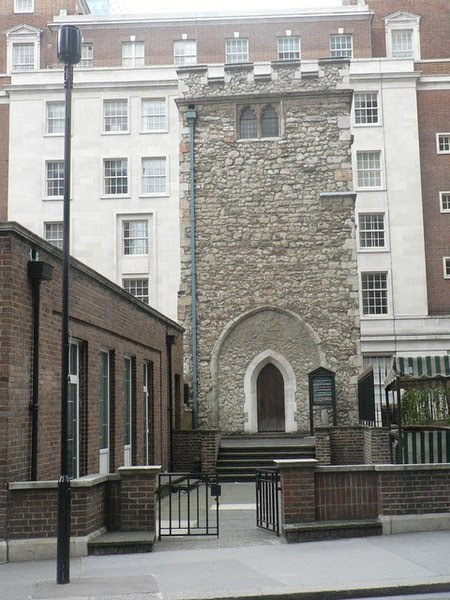 The suffix means that the church was built of stone and is apparently a record of the time when other churches with the same dedication were still constructed of timber. There is a history of the church at All Hallows Staining , and there is another one here. 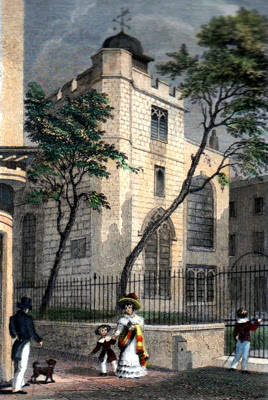 Image: ashrare.com
My friend then took me on to St Olave Hart Street 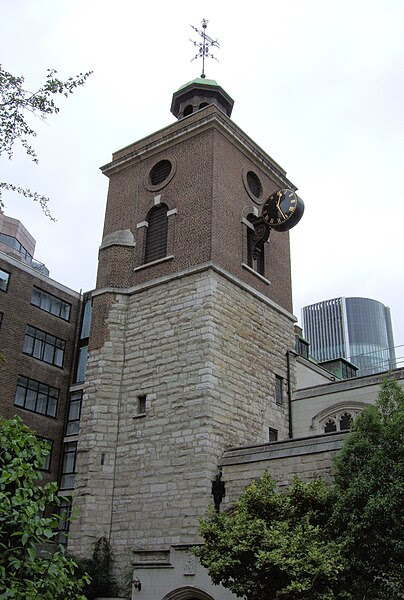 The is another of the medieval churches that survived the Great Fire, but not the aerial bombardment of 1941. The church of the Clothworkers it has been handsomely, and not too drastically restored. It contains the grave and monument of Samuel Pepys, whose burial took place there in 1703. The striking gateway through which he and Mrs Pepys went to church dates from 1658 and leads into Seething Lane where the Pepys' lived.

As the only surviving church in London dedicated to the patron saint of Norway King Haakon VII laid one of the foundation stones of the rebuilding, and this forms part of the low screen separating the chancel from the nave.

There is an illustrated account of this delightful church with links at St Olave Hart Street and there are more pictures of details and features here.

Before I got the tube back to Paddington from Tower Hill I looked at the subsantial piece of Roman city wall that stands by the entrance to the station, complete with a statue of the Emperor Trajan. This has endured for upwards of nineteen centuries close to the heart of the City - an amazing survival and one that has witnessed so much of the history of London and of England. 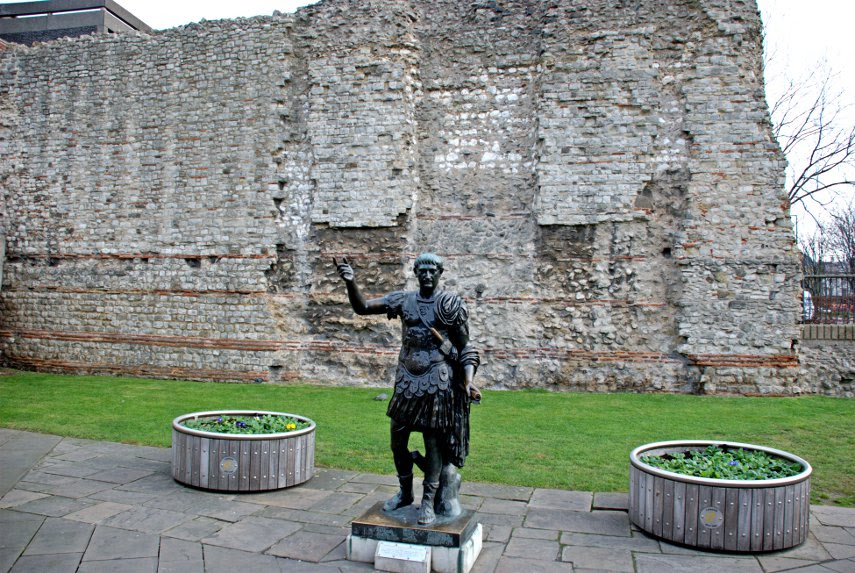 The Emperor Trajan and London Wall