A series of posts on the Medieval Religion discussion group marked the fact that yesterday, April 19th, was, or woulld have been had it not been Sunday, the feast of St Ællfheah or Alphege, born c.953 and martyred by the Danes at Greenwich in 1012. I have a previous post about him and his cult, written for the millennium of his martyrdom in 2012, atSt Alphege. There is an online account of his life and career here.

Matt Heinzelman posted as follows:
Ælfheah was the first Archbishop of Canterbury to die a violent death. A contemporary report tells that Thorkell the Tall attempted to save Ælfheah from the mob about to kill him by offering them everything he owned except for his ship, in exchange for Ælfheah's life; Thorkell's presence is not mentioned in the Anglo-Saxon Chronicle, however. Some sources record that the final blow, with the back of an axe, was delivered as an act of kindness by a Christian convert known as "Thrum."

Jane Stemp Wickendon posted:
This is the Peterborough chronicle variant on the Anglo-Saxon Chronicle:

"And in this year, between the Nativity of St Mary and Michaelmas they besieged Canterbury, and got inside through treachery, because Aelfmaer, whose life Archbishop Aelfheah had earlier saved, betrayed Canterbury to them. And there they seized the archbishop Aelfheah, and Aelfweard the king's reeve, and Abbot Leofwine, and Bishop Godwine - and they let Abbot Aelfmaer go free. And they seized all ordained people, both men and women, in there - and it is impossible for any man to say how much of the people that was - and afterwards were in the town as long as they wanted; and when they had thoroughly searched it, then they turned to the ships, and led the archbishop with them.

Then he who was earlier the head of the English race and of Christendom was a roped thing. There wretchedness might be seen where earlier was seen bliss, in that wretched town from where there first came to us Christendom and bliss before God and before the world.

And they kept the archbishop with them up until the time when they martyred him."

Rev. Gordon Plumb posted these images from the windows at Canterbury Cathedral, Nt IX, dedicated to the saint's life [For larger views click on the links at bottom right]: 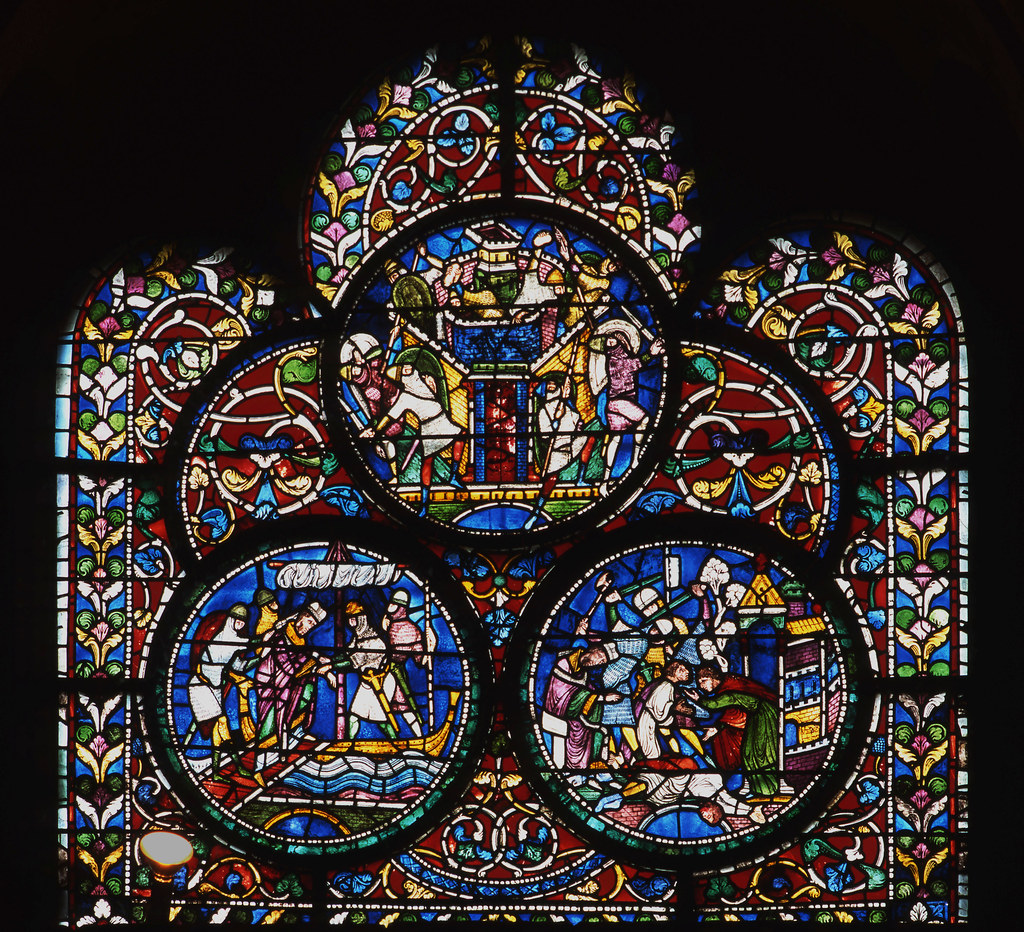 Three panels illustrating the martyrdom of St Alphege by the Danes. The ornament is extremely well preserved, and the figured panels are the best preserved of these series, with the upper one showing the siege of Canterbury being especially well preserved. The lower right panel of the Massacre by the Danes is heavily restored.

Detail of the Siege of Canterbury: 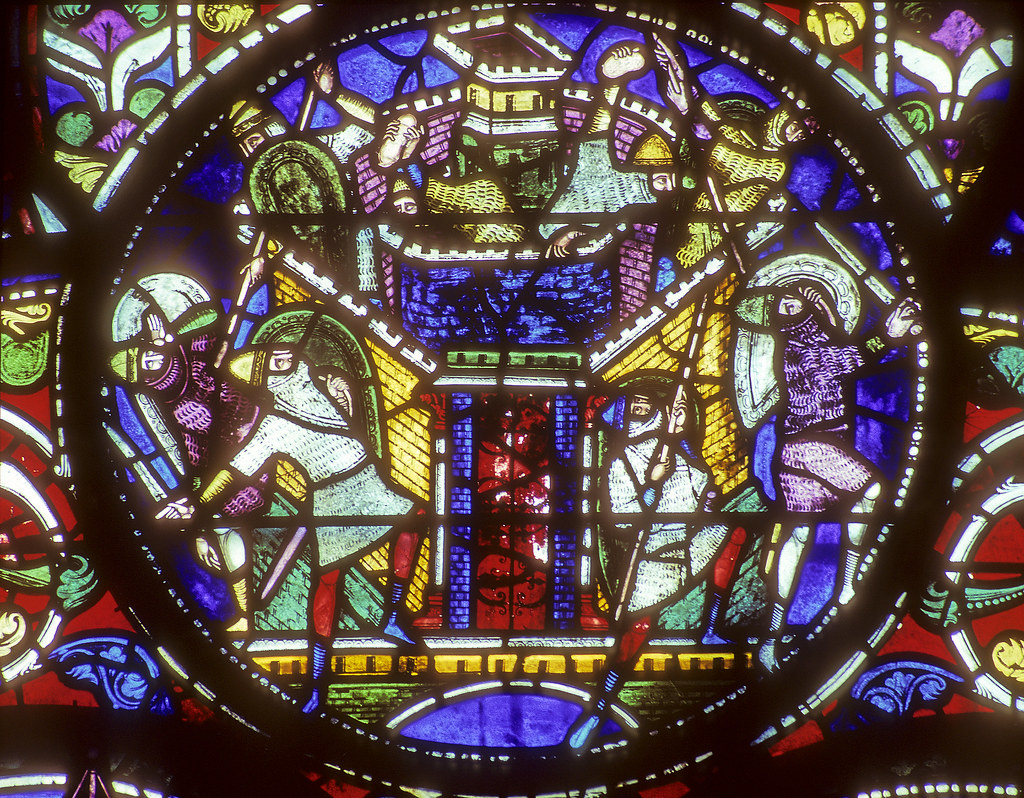 A wonderful panel of c.1180, showing the siege of Canterbury in 1011 by the Danes. Eventually the city fell and seven months later the Danes killed Alphege the Archbishop when the ransom demanded was not paid.

Detail of Alphege being taken aboard a Danish ship: 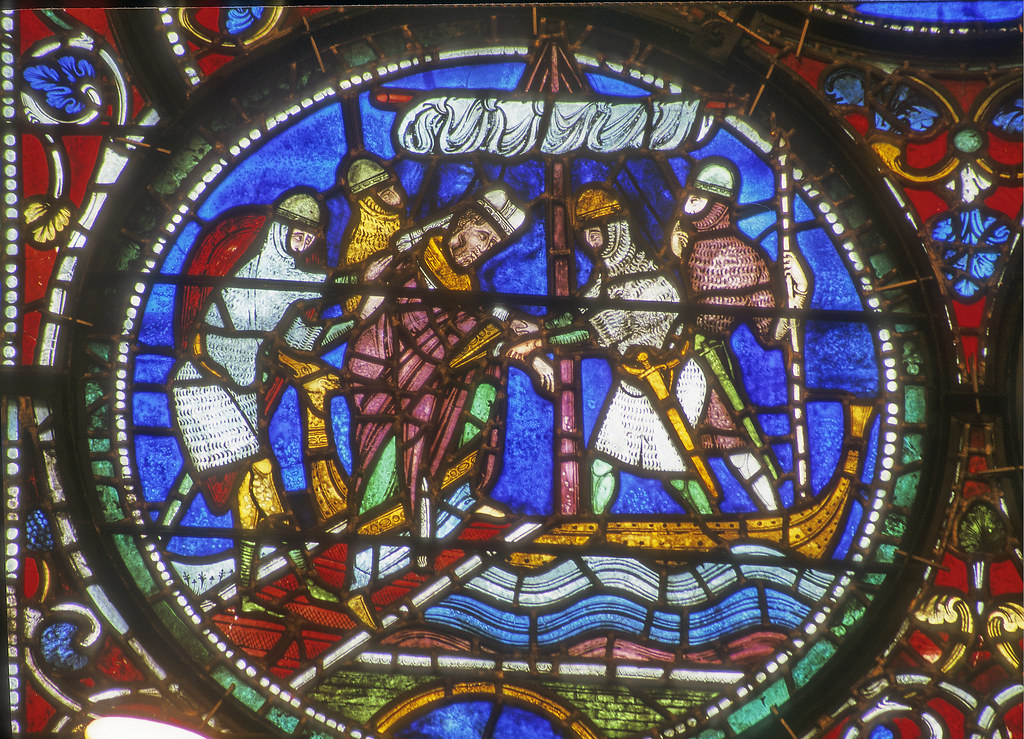 Detail of the martyrdom of St Alphege by the Danes: 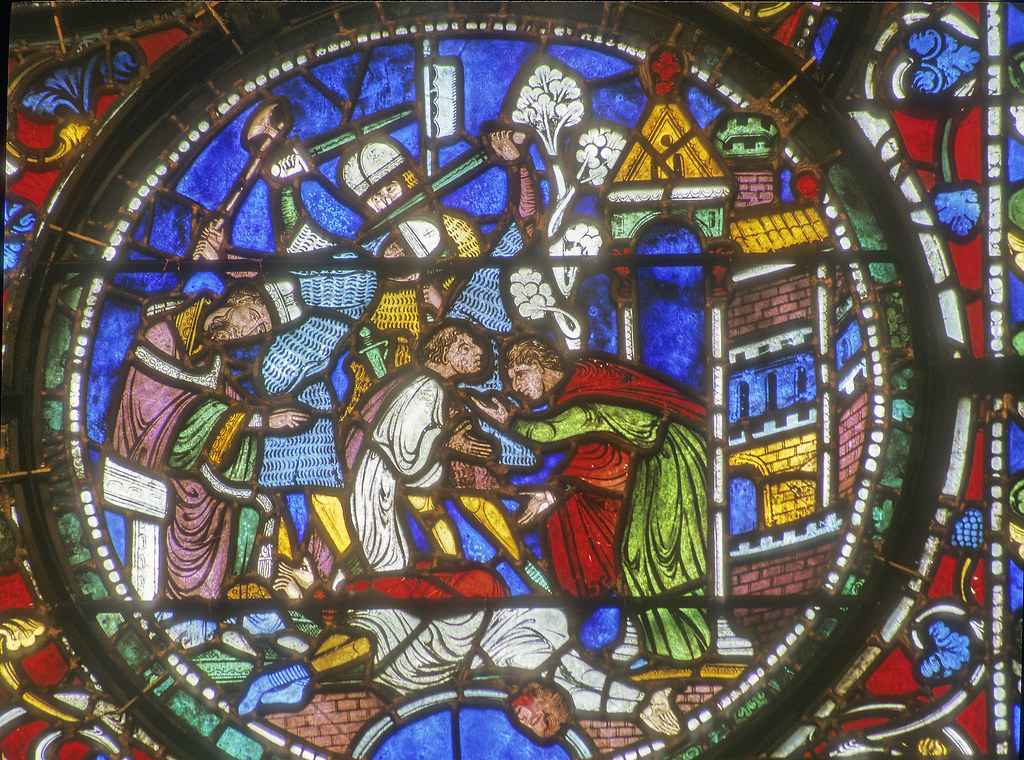