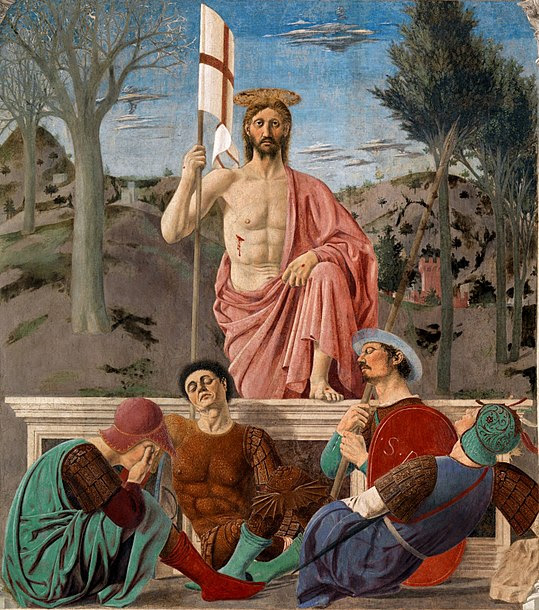 This is essentially a reworking of my post for Easter in 2011. That is partly because, as I have observed before, the Resurrection has proved far more difficult for artists to depict than the Crucifixion. One of the few paintings which achieves its purpose is Piero della Francesca's awe-inspiring composition. It is reminiscent of other late medieval representations with Christ, banner in hand, stepping out of table tomb rather than a rock cut sepulchre. Literalism, or its absence is not the point - this painting conveys with an almost unique power the world shattering significance of what has happened. Aldous Huxley described the fresco in an essay as "the greatest painting in the world" because in it Christ has the face of someone who has indeed conquered Death and Harrowed Hell.

There are online articles about Piero della Francesca's The Resurrection here and here.
Does not a ray of light issue from Jesus, growing brighter accross the centuries, that could not come from any mere man and through which the light of God truly shines into the world? Could the apostolic preaching have found faith and built up a worldwide community unless the power of truth had been at work within it?
If we attend to the witnesses with listening hearts and open ourselves to the signs by which the Lord again and again authenticates both them and himself, then we know that he is truly risen. He is alive. Let us entrust ourselves to him, knowing that we are on the right path. With Thomas let us place our hands into Jesus' pierced side and confess: "My Lord and my God!"
Pope Benedict XVI
Jesus of Nazareth: Holy Week
2011
From pp.276-77