Images of the Resurrection

Following on from my use of paintings by Piero della Francesca in Christ is Risen! Alleluia! and Raffaellino del Gabo in Easter in Oxford   this week two further images of the Resurrection in the Easter edition of the Catholic Herald caught my eye. Both use the same concept as the first two of Christ stepping or arising out of a table tomb.

Andrea Mantegna(c.1431-1506) produced his painting in 1457-59 as a commission as part of an altarpiece for the abbey of San Zeno in Verona, where the main part remains, with portions in Paris and Tours. 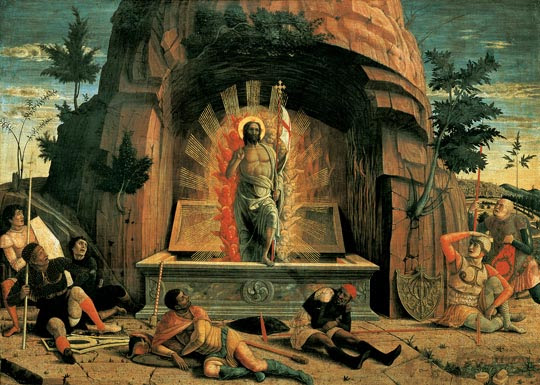 produces a dynamic depiction of the event, but his historicism is evident - he was an assiduous reseacher for the architecvturala nd other features of his paintings. His depiction is slightly earlier than Piero, by about five years.

I am inclined to add that Mantegna's palette seems so often to suggest the menacing light as a thunder storm approaches - the effect is awesome, but not always very comfortable. Bernardo di Betto, knoewn as Pinturicchio (1454-1513) was commissioned by Pope Alexander VI to decorate what are now known as the Borgia Apartments in 1492-4. As the link explains recent cleaning of Pinturicchio's fresco "The Resurrection" has revealed a scene which is believed to be the earliest known European depiction of Native Americans,

This splendid image lacks the physicality of Piero or Mantegna, but is wonderfully joyous and positive. Perhaps best known for the portrait of Pope Alexander VI, who looks very much of the flesh indeed, its rendering of the Resurrection itself does, maybe, make that event perhaps too etherial, too lacking in the gritty realism of Mantegna or Piero.