An Epitaph for King Richard III

The Special Correspondent has forwarded to me the latest online Newsletter from the College of Arms, which had the following article about what appears to be the epitaph from the King's original tomb in the Greyfriars. The links about the recent service of reburial at Leicester cathedral are also well worth looking at as they put it in the context of recent research on such reinterrments in the late middle ages : 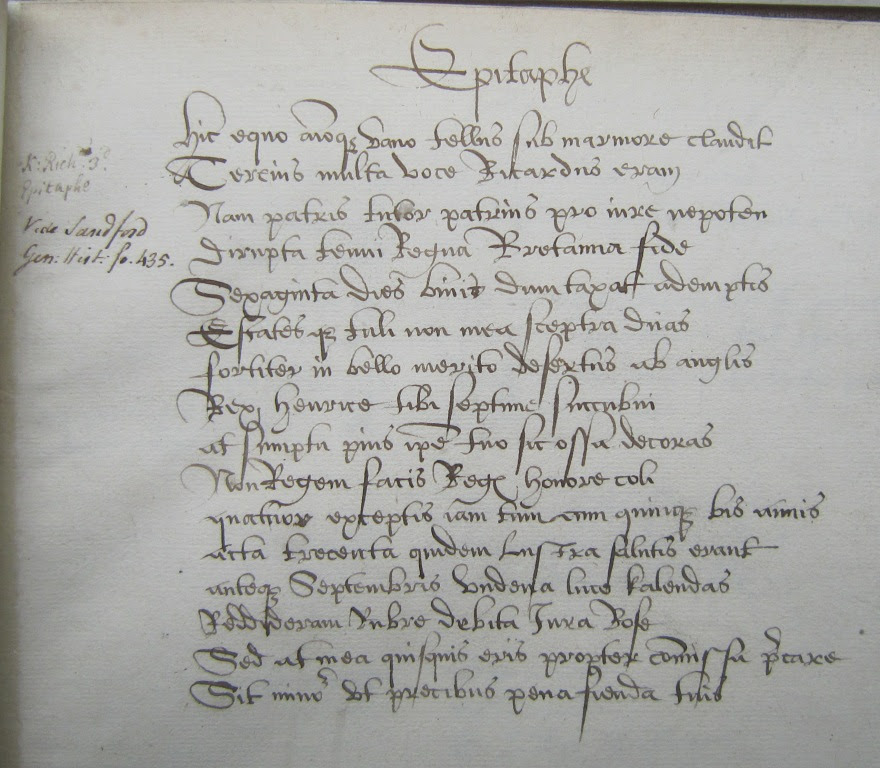 On 26 March 2015 King Richard III was reinterred in a specially-constructed tomb in Leicester Cathedral, in a service in the presence of Their Royal Highnesses the Countess of Wessex and the Duke of Gloucester, the Archbishop of Canterbury, the Lord Chancellor and other distinguished guests. The College of Arms, founded by Richard III in 1484, was represented in the procession and service by Thomas Woodcock, Garter King of Arms, and Peter O'Donoghue, York Herald. Some information about the reburial service can be had here and here.

Illustrated is an image from a College of Arms manuscript, showing an epitaph for Richard III. It is in the hand of Thomas Hawley, Clarenceux King of Arms, a herald between 1509 and his death in 1557. The epitaph would seem to come from the original tomb of Richard in the Franciscan Priory in Leicester, erected by Henry VII. It makes reference to the latter's piety and generosity, whilst hoping that the reader will pray for Richard on account of his offences and thus lessen his punishment.

Image and text: College of Arms

The last sentence is particularly interesting, being further evidence of King Henry VII's Christian charity - which may not be the traditional image of him, but one that needs to be considered.

I can't see either of your images, on IE or on Firefox.

I hope I have managed to repair it!