Maundy Thursday started for me with Tenebrae at Blackfriars in the Dominicans' version of the ancient office. It has become my practice to attend this during the Triduum. In the evening I went to the Oratory for the Mass of the Lord's Supper. There was a fine, reflective sermon on Priesthood from Fr Richard Biggerstaffe of the St Barnabas Society. I managed, just about, to stay awake for the Watch at the Altar of Repose, and went home after Compline.
On Good Friday I was back at Blackfriars for Tenebrae, and for the Midday Office before going to the
Solemn Liturgy at the Oratory, at which Bishop William Kenney, the area assistant bishop, presided. As always this drew a large congregation. 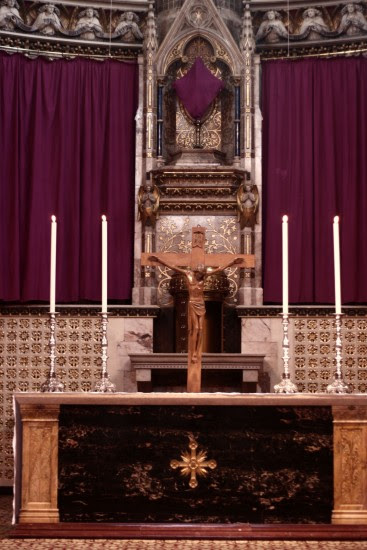 The High Alatar at the Oxford Oratory prepared for the Communion on Good Friday
Image: Oxford Oratory website
Following the liturgy, and apause for a cup of tea with friends, I returned to the Oratory for Stations of the Cross and the customary blessing with a relic of the True Cross - and helped in dismantling the large Crucifix which the Oratory sets up on Good Friday in the forecourt.
Holy Saturday found me starting again with Tenebrae at Blackfriars again, then going along to the Oratory, where Easter/Spring cleaning was going on all over St Aloysius'. I was set the task of emptying the font of last years baptismal water and then polished the temporary brass font ready for the evening's ceremonies. I am quite adab hand at polishing silver and brass, though I say it myself. This was further manifested as a ministry by helping a friend clean the silver thurible, chipping away at the deposit of shellac-like residue inside the lid, and was told of how it had been rescued from the wreck of church during the Spanish Civil War by a volunteer fighting alongside the Nationalists, whose son has passed it on to St Aloysius.

Apart from abreak for the Midday Office back at Blackfriars taht took much of the afternoon before I made my confession - I try to leave that as late as possible at Easter - and then Vespers at Blackfriars.
After a meal it was back to the Oratory for the Easter Vigil, where we had two baptisms and a reception into full communion. The sermon was again from Fr Biggerstaffe, who drew out the significanc eof being known and called by name by the God we know in Christ.

This year's Paschal Candle has been painted once again by Freddie Quartley. As this is the five-hundredth anniversary year of the birth of St Philip Neri, the candle depicts him, as well as angels holding instruments of the Passion, copied from the cupola by Melozzo da Forli in the Basilica of Loreto: 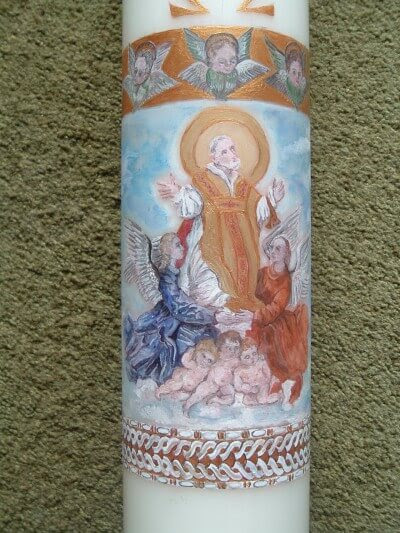 
On Easter Day I attended the mid-morning Solemn Mass which was celebrated by Bishop Robert Byrne who is the former Provost of the Oratory. Fr Joseph's sermon reflected on the privacy and intimacy of the Resurrection itself - that was the Father, Son and Holy Spirit in action, not an event to be witnessed by outsiders. Witnesses came later that first Easter morning. This was a suitably splendid liturgy, concluding, as is the Oratory's custom on Easter Day, with the "Hallelujah Chorus" to send us out in the spirit of the Resurrection - and off for a gin and tonic in the parish centre and time to relax with fellow parishioners,

Solemn Vespers was, I think, better attended than in some recent years, and we had theOffice sung responsively between the clergy in choir and the singers in the west gallery. There was an impressive line-up in the liturgical choir with a bishop and a monsignor joining the Oratorians and other local clergy.

And finally, after all that, it was off for a very enjoyable dinner with a friend and his family at their home.
The Fathers and Brothers of the Oratory wish you all every joy of the Resurrection and a blessed Easter. 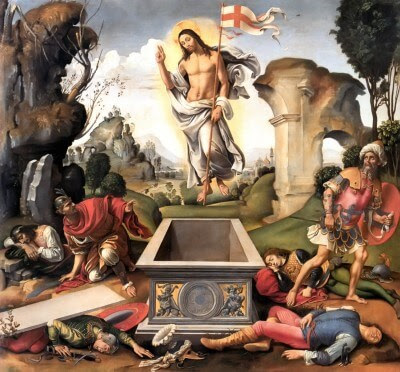