Return of the Bourbons in 1814 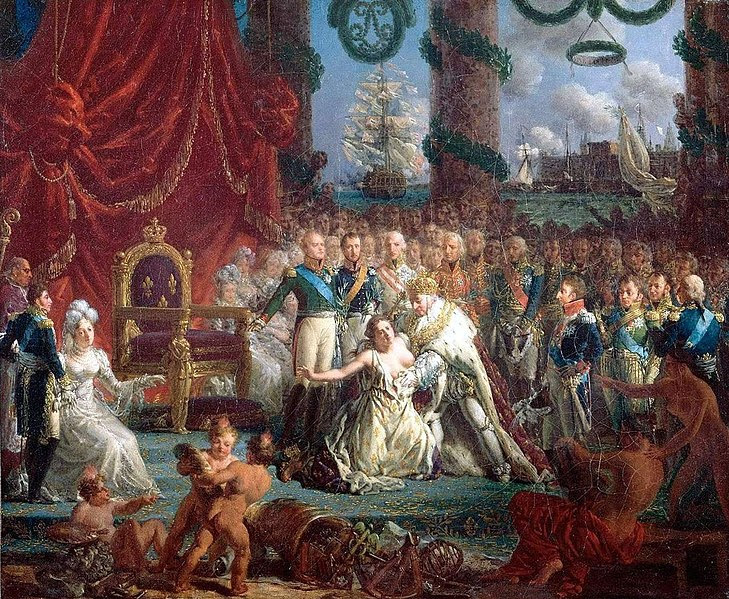 Allegory of the Return of the Bourbons on 24 April 1814:Louis XVIII Lifting France from Its Ruins

A painting by Louis-Philippe Crépin at Versailles

Today is the two hundredth anniversary of the return of the Bourbon dynasty to France in the restoration of 1814. King Louis XVIII returned to his kingdom at Calais, entering Paris on May 3rd.

In this allegorical painting the King, robed and crowned - he was in fact never to be have a coronation at Rheims due to his physical incapacity - is shown raising a somewhat distree personification of France. He is surrounded by his relatives, with, on the left, the seated figure of Madame Royale, Marie-Thérèse, daughter of King Louis XVI and Queen Marie Antoinette, who had been married to her cousin Louis, Duc d'Angoulème, who stands beside her, and who was the elder son of the King's younger brother Count of Artois, the future King Charles X, who was acting as Lieutenant -General of the Realm in anticipation of King Louis' return.

At Burton Constable Hall in Yorkshire there is a small painting of the return of the French royal family which is not an allegory but appears to be a more direct, if dramatic, representation of the return. In it the seated King Louis XVIII and Madame Royale are presented with three lilies, symbolic of the kingdom whilst still on board their ship, the Royal Sovereign. A fascinating little picture to find amongst the other treasures of that very interesting country house.

The Arrival of King Louis XVIII at Calais in 1814

The misfortune of France, in my opinion, since 1814 is that the Restoration celebrated in these images was not to last - consolidated under King Louis XVIII, jeopardised by King Charles X and his advisors, but not such that it might not have endured it was to be followed by a whole series of constitional experiments from 1830 onwards that have done little for the country, and at times its survival has indeed been in question. It is the enduring strengths of France, and they are far older than anything set off in 1789, which have enabled it to survive, and it is those which attract me on my visits.