Observing the Triduum in Oxford

I kept the Triduum here in Oxford, principally at the Oratory but also with some time spent at Blackfriars.

I began with the Dominicans by attending Tenebrae there on Maundy Thursday morning, something I usually do, but this year I was able to attend the service on both Good Friday and Holy Saturday as well. In the rather austere but elegant setting that is the church at Blackfriars - an excellent composition in Perpendicular style from just under a century ago, the singing of the psalms and propers and the gradual extinguishing of the candles on the tenebrae hearse is always striking and thought provoking in the right way, as well as the prostrations of the cantors at the conclusion of the Office.

After time sitting in front of the computer getting this blog up to date or even prepared in advance, I went to the Oratory for the liturgy of Maundy Thursday. I think the congregation was rather larger than in previous years, although perhaps fewer stayed to participate in the watch at the Altar of Repose. I did stay - I am able to do so being free of family or other commitments so it is something I can offer - even if like the Apostles I have to fight drowsiness, and found myself meandering more than usual in reciting the Rosary - and am glad that I can do that on behalf of others. The chapel of the Sacred Heart had been transformed to the Altar of Repose with particular elegance I thought - not too fussy, but very dignified with standard candles flanking the space immediately in front of the altar.

Good Friday began at Blackfriars - looking especially plain after the stripping of the altar - and then after a visit to the Oratory to see if any help was needed ( the standing Crucifix that is set up each year in the forecourt was still awaiting installation as the supporting btrackets were temporarily mislaid, so I could not help with that as I have in  past years - nonetheless it was in place by the afternoon), I had one of my small collations for the day before going back for the Solemn Liturgy.

This always attracts large numbers - and they may again have been up. I think more than usual of the ladies in the congrgation were dressed in black as for a funeral, and some men were wearing black ties - I have managed to mislay mine, so I was unable to do so.The Veneration of the Cross moved quickly, and the whole liturgy was accomplished with dispatch - as one does rather expect there.

After a restorative pot of tea I went back to the Oratory for the Stations of the Cross which concluded with the blessing of individuals with a relic of the True Cross.

Holy Saturday started at Blackfriars again with Tenebrae, then I was back to the Oratory, which was having a more than usually thorough spring-clean with Fr Provost hoovering down the accumulated dust on the clerestory window sills, to sit in the porters's lodge and deal with enquiries and sales before midday.

I then broke off to meet some new Irish friends and to give a tour of Newman's Oxford, taking them to Trinity, St Mary's and Oriel before having a very enjoyable lunch with them.

Then back to the Oratory, another session portering, followed by making my Easter confession and attending Vespers at Blackfriars, and having a meal to set me up for the Vigil.

For this I was again at the Oratory, and I think the congregation, always a large one for this liturgy, was bigger than in previous years. As I said last year I do slightly regret that due to practical necessities in a parish church the shorter form of the Exsultet is sung and that we only have four Prophetic readings rather than seven, but this was a splendid celebration, with four baptisms and two receptions into the Church.

As I walked home I was surprised to see lights on in the church of St Thomas - my old haunt as churchwarden - and then saw a great procession of the faithful - Orthodox as I realised - who were walking round the church and bearing candles as part of their liturgy. I was delighted to see the church being used by the Orthodoc community - I am not sure which one, but they were alarge crowd.

Easter morning I was at the last minute arriving at the Oratory - my fault entirely - so I had to stand for the whole of the Solemn Mass, but I felt numbers were again slightly up, though it is not easy to say definitely on a day when so many crowd into the church, or indeed in some cases had to stand outside. All was very splendid, the choir supported by an orchestra and the Mass  ended, as is our custom, with the Hallelujah Chorus. Then round to the parish social centre for a celebratory gin and tonic...

Solemn Vespers was, again as is the custom, sung by the Oratorians and with the Choir responding, and again suitably splendid. For Easter Day the church looked very fine with the best altar hangings, ornaments - including the figure of the Resurrected Lord above the Tabernacle - and flowers.

All in all a fine celebration of the Triduum, and for all the work involved, a sense that it is pity it is all over until next year. Meanwhile we can, and should, enjoy Eastertide. Once again, a happy Easter to you all. 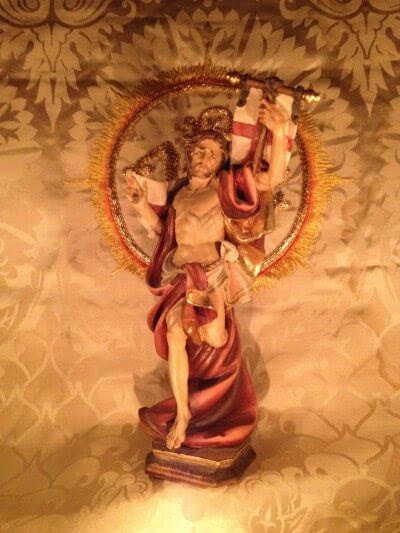 The figure of the Resurrected Lord at the Oratory