A corner of London that is forever Norway

On Monday evening I went up to London to dine at the Norwegian Church in London, which is located in Rotherhithe. The invitation came through my good friend Fr Martin Stamnestro, whom I first knew when we were both members of the congregation at Pusey House, and when he was doing his doctorate. Having served as Sacristan at Pusey he was received as a Catholic just after I was, and is now the priest at Ålesund (Aalesund) in his native Norway. He tells me that his parish is the size of Norfolk.

Fr Martin is on a brief visit to this country and was staying at the Norwegian Church, whose Pastor and Chaplain, the Rev.Torbjørn Holt, I had met frequently through Fr Martin when we were all in Oxford -  Torbjørn was then based here as Chaplain to Norwegian students in the UK. the invitation was to dine and to sleep over and return on Tuesday. I felt able to relax my Lenten discipline as I was travelling, and receiving hospitality, and it was also the ninth anniversary of my reception as a Catholic.

The church is near the Bermondsey tube station so the journey was easy, and I found myself at a dinner party whose other guests included another old Pusey friend who is now a Catholic and a barrister in London, the local Anglican vicar and his curate, who himself was a more recent Sacristan of Pusey House, and members of the Norwegian community, some of whom I had met before when I visited the church at Easter 2007. This was the beginning of an evening of very generous and graceful hospitality in the Chaplain's very handsome flat, which is situated on the first floor of the church building. We had lively and cheerful discussion about most topics under the sun - and in religious terms a true and generous ecumenical friendship was once again very apparent. 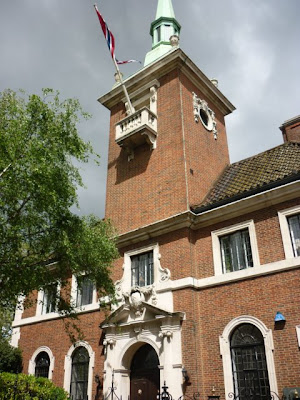 There has been a Norwegian church in London since the late seventeenth century and was originally a seaman's mission. The present church itself dates from 1927, the foundation stone having been laid the year before by Crown Prince Olav - later King Olav V  -  and during the Second World War was accorded pro-Cathedral status , and used by the exiled King Haakon VII and his government.

Today it is very much a Norwegian cultural centre in London, as are the other Scandinavian churches for their respective national communities, and as can be seen here.


Therte is an article about the church and its ministry here and another with good pictures of the building and its furnishings here.

On Tuesday I joined in a hearty Scandinavian style breakfast of cold meat and cheese  before travelling with Torbjørn and Martin by taxi across London, dropping Torbjørn off at Church House for ameeting before going to Brompton Oratory where Martin had arranged to say Mass. Very unfortunately I was unable to stay for that as I had to be back in Oxford by mid-afternoon and the taxi-ride had taken longer than any of had expected, and we were running late. However we plan to meet today for lunch when he is here in Oxford.

A most enjoyable break with good friends in London, and almost a foreign holiday in itself.