Today is the liturgical commemoration of St George this year - but on that point do look at Fr Hunwicke's post S George??. To mark the feast of the national patron saint here are some late medieval English depictions of him. This was the period in which his cult was widespread and images of him must have been plentiful. However time and chance as well as religious and political upheavels have robbed us of most of them. Those which do survive are often damaged. 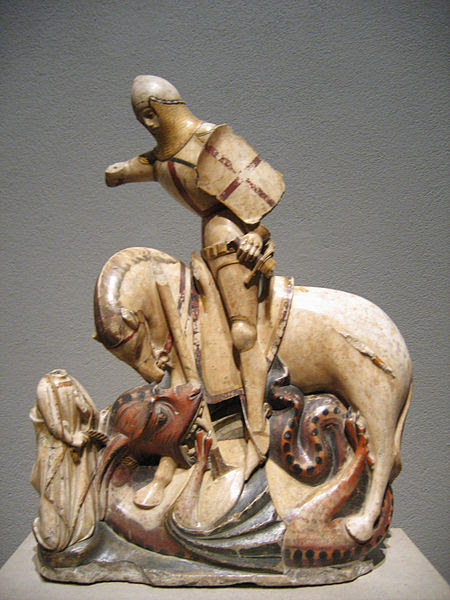 Altar with St George and the Dragon, presented to Queen Margaret of Anjou, wife of King Henry VI by the first Earl of Shrewsbury, and made in Rouen in 1445. Kneeling at the altar are the Knights of the Garter

This looks similar as acomposition to the statue above,and to such spectaular surviving pieces as the statue of St George which survives in Stockholm, and about which I have posted beforehand in

St George and the Dragon
.
Image: wars of theroses.devhub.com 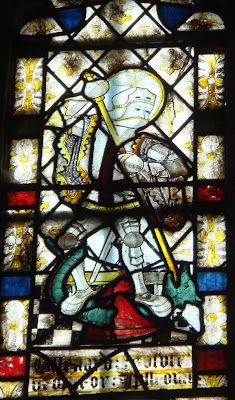 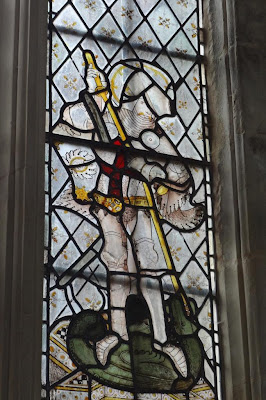 Haddon Hall in Derbyshire has this figure, notable for his ginger moustache

This fine mid-fifteenth century figure of St George, in St Martin Coney Street in York.
Originally in the clerestory of the church the figure survived the bombing of 1942 and has been re-set in a window in the restored south aisle

The figure in its original situation before 1942
Left to right: St Christopher, St Gabriel, the Virgin Mary and St George, with donors below.


If stained glass has been vulnerable to iconoclastic reformers and revolutionaries, not to mention bombs and neglect, so too have been wall paintings. In addition to the one I featured in Medieval Wall paintings uncovered in Wales, here is one of the best surviving examples from England: 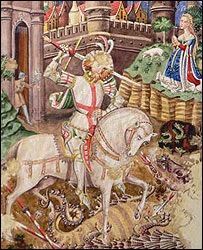 St George and the Dragon

This detail is from a watercolour painting by the Great Yarmouth artist Cornelius Jansson Walter Winter (1821-1891), drawn from the wall-painting discovered in St Gregory's Norwich in 1861.
The wall-painting is thought to be one of the finest and most complete medieval depictions of St George to be found in England, and this painting gives an idea of what its original appearance may have been.

St George pray for us