Yesterday evening I went to Mass in the extraordinary Form at SS Gregory and Augustine here in Oxford to mark the Solemnity of St George. Following the celebration we were invited back to the altar rail to venerate a relic of St George, which we all did. This obviously gave a greater sense of immediacy to the celebration of the nation's patron saint, although it must be conceded that the reliquary was rather less splendid than this example from the Wittelsbach collection at the Residenz in Munich: 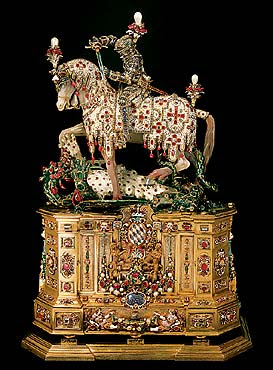 The Statuette of St George

Image: Residenz Munich
The statuette, made of gold, enamel, silver-gilt, diamonds, rubies, emeralds, opals, agate, chalcedony, rock crystal, other precious stones and  pearls, and standing 50 cm high, was made in Munich between 1586 and 1597 to house a relic of St George that Archbishop Ernst of Cologne sent in 1586 to his brother Duke Wilhelm V of Bavaria. The bearded face of the saint behind the movable visor is carved from boxwood and resembles that of the man who commissioned the statuette, Duke Wilhelm V.

In the seventeenth century, the statuette was displayed on important feast days on the altar of the Reiche Kapelle (Ornate Chapel) in the Munich Residenz.

From the foundation in 1726 of the Royal Military Order of Saint George for the Defence of the Faith and the Immaculate Conception the reliquary featured in the celebrations of the Order, which still exists and about which there is an online account here.

The Grand Master of the Order is the Bavarian Sovereign and Head of the House of Wittelsbach.

Image:bundesliga. the offside.com
Posted by Once I Was A Clever Boy at 09:43