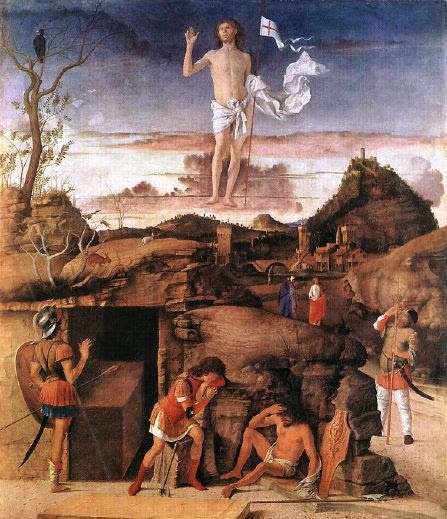 There is an insightful commentary on the painting here.

This year I was back at the Oxford Oratory for the Triduum - for the previous two Easters I had been asked to assist with the serving, and was indeed happy to do so, at SS Gregory and Augustine in the north of the city. However this year they were up to strength with servers, and I was not required.

As I mentioned in a previous post I had to be in London on Maundy Thursday, but I got back in good time so as to attend the Mass of the Lord's Supper and the pedelavium at the Oxford Oratory, and then took part in the vigil before the altar of repose which ended with the singing of Compline. For this there was a good number of people, and we sang it to a monastic chant that was particularly effective in the candlelit space of the chapel.

On Good Friday I went to the observance of Tenebrae at Blackfriars - the only one of the three days on which I was able to do so this year  - which is always both moving and striking. In the afternoon I was back at the Oratory for the Solemn Liturgy of the Passion - which was, of course, very well attended. Following a cup of tea at a nearby restaurant I was back for Stations of the Cross and for the blessing with a relic of the True Cross

Holy Saturday again found me busy in the day with a tour, this time  taking a group to Blenheim Palace in the morning, but I got back in time to go to Confession before eating and going back to the Oratory for the Easter Vigil. The building work on the new accomodation block had involved breaking up much of the surface of the forecourt to link to mains services, but this had now been refilled, and we were able to gather as usual around the Easter Fire for the lighting of the Pascal Candle and the procession into the church building. This  was full of worshippers and we had both a baptism and a reception into the Church. Afterwards some of us went for a celebratory drink after our Lenten abstinence

On Easter Day I went to the mid-morning Solemn Mass at the Oratory. The large congregation was augmented by visitors and the whole occasion suitable splendid, with the very best gold watered-silk vestments in use, and concluding - as is our custom - with a spirited rendition of the Hallelujah Chorus by the choir. Here from the Oratory website are some pictures of the Mass;

I had lunch with friend and a guest at a nearby restaurant before we went back to church for Solemn Vespers - always a grand affair with the choir singing responsively with the community, and concluding with Benediction.

This was followed by more secular celebrations - a meal with other friends in Headington, where our host entertained us  with venison, duck and lamb as well as plenty of alcohol to continue the sense of celebration.
Posted by Once I Was A Clever Boy at 09:24