Fr Blake's post for yesterday, Dragon Slaying Glorious Martyr, featured the St George Altarpiece from Valencia of circa 1420 which is now in the Victoria and Albert Museum. I have posted before using the main painting of the saint as dragon slayer, but thought I would post the a picture of the whole composition as a further example of depictions of the story of the martyr saint: 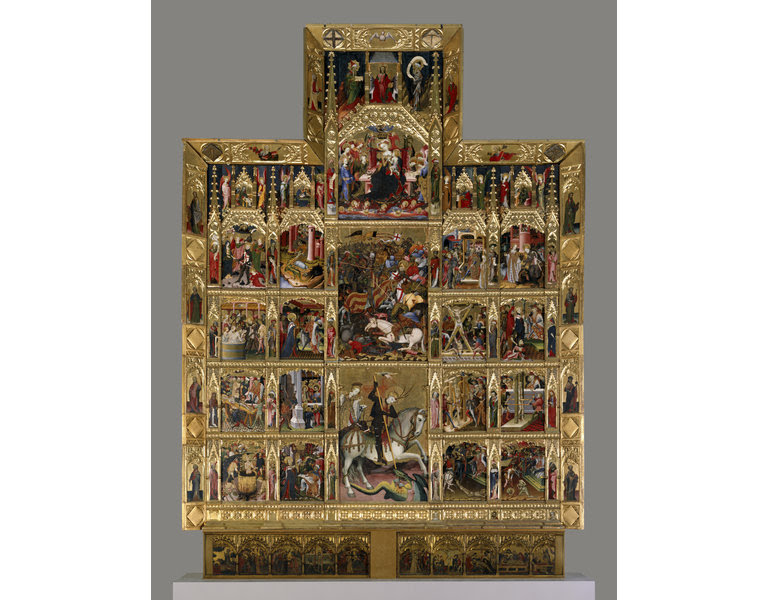 This large altarpiece is a fine example of the Valencian school during the International Gothic Style in the first quarter of the 15th century. It was traditionally attributed to the German painter established in Valencia, Andrès Marçal de Sas (ca.1393-1410) although this attribution is still subject to debate and leads to more cautiously call the artist responsible for this work 'Master of the Centenar' according to the provenance of the retable most likely executed for the chapel of the Confraternity of the Centenar de la Ploma.

The altarpiece illustrates the legend of the St George. It is composed of three superimposed central panels surmounted by the Holy Spirit and Christ enthroned flanked by two prophets. On each side are depicted ten scenes of the life of the saint, combining two different narrative cycles: the victory of St George against the dragon and the martyrdom of the saint. The predella panel illustrates ten scenes of the Passion of Christ.