The election of Pope Urban VI in 1378

Today is the 635th anniversary of the election of Bartolomeo Prignano, Archbishop of Bari, as Pope Urban VI in 1378. He was the last non-cardinal to date to be elected to the Papacy, and his election was to lead within months to the Great or Western Schism.

There is an illustrated online account of his life here and the online text of the Cathiolic Encyclopaedia, which can be read here, has a detailed account of the events surrounding his election on this day in 1378. Those events and the way in which they were recounted in the following months were to be central to the validity or otherwise of both Pope Urban's election and that of his intended replacement Robert of Geneva as Pope Clement VII in the late summer.

The change from being a reliable servant to being the Servant of ther Servants of God appears to have been too much of an adjustment for the new Pope to make, and it either released inner energies hitherto under tight control or, it has been suggested by some, unhinged him. It is clear that as Supreme Pontiff Pope Urban rapidly antagonised the Cardinals, and after their move against him during the Roman summer, he showed himself unrelenting and unforgiving in his dealings with their successors. The consequence was to be a divided church, and a divided Christendom, until the election of Pope Martin V in 1417, itself to be followed by the Conciliarist difficulties that threatened him and his successor Pope Eugenius IV until the election of Pope Nicholas V in 1447.

The tomb of Pope Urban VI in the Vatican﻿

The effigy of the Pope on his tomb 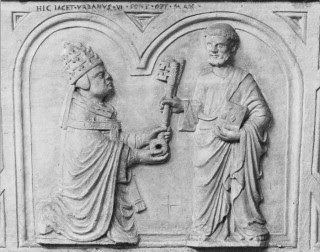 Petrine commissision: St Peter gives the keys to Ppope Urban VI
Detail of the panel from the tomb


There is more about the tomb and its history here. 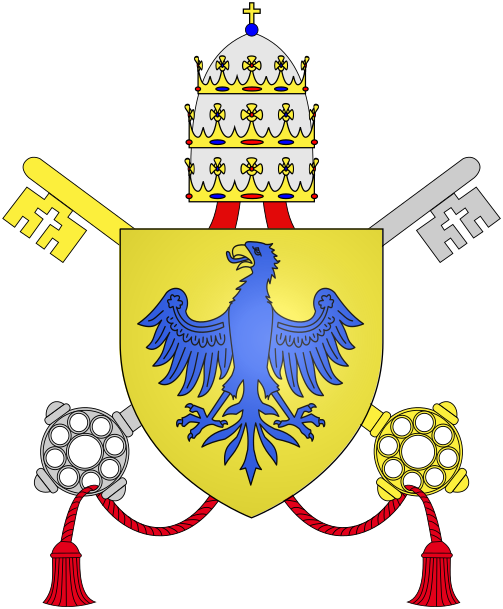 The arms of Pope Urban VI