Lacock Abbey was a house of Augustinian canonesses in Wiltshire. Dedicated to St Mary and St Bernard it was founded in 1229 by the widowed Ela Countess of Salisbury. At the dissolution it became a  private house which incorporates much of the monastic buildings. Since 1944 it has belonged to the National Trust and is open to the public.

There is an online introduction to its history here and the VCH Wiltshire account of the medieval abbey can be read be read here.

There are only two manuscripts surviving from the medieval library of Lacock Abbey and they made up Lots 11 and 12 at a recent Christie's sale.

The descriptions from the Christie's catalogue: 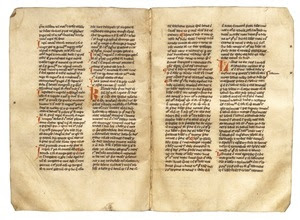 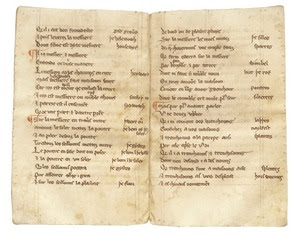 Lot 12
MANUSCRIPTS FROM LACOCK ABBEY: PROPERTY OF A LADY, BY DIRECT DESCENT FROM THE ABBEY'S TUDOR OWNERS
Treatises In Anglo-Norman Verse: opening with Walter of Bibbesworth (c.1219-c.1270), Le tretiz, with interlineations and side-notes in Middle English
Decorated Manuscript on Vellum
England, probably first half 14th century
Estimate: £90,000 - 120,000
Images;finebooksmagazine.com
The Expositiones Vocabulorum Biblie was bought by the National Trust and is now on display at the abbey, as can be seen in a BBC report which can be seen here.

The vernacular manuscript was bought by the Antiquarian booksellers Bernard Quaritch Ltd.