In my last post I referred to the Cross Neith, and thought I would edit together the entry on Wikipedia - which knows nothing of its history after 1283 -  and some archive articles on the excellent website of St George's Chapel at Windsorto give an account of this once famous and treasured relic.


The Cross of Neith or Cross Gneth (Welsh:Y Groes Naid or Y Groes Nawdd) was a relic believed to be a fragment of the True Cross which had been kept at Aberconwy by the kings and princes of Gwynnedd, members of the Aberffraw dynasty who established the Principality of Wales They believed it afforded them and their people divine protection. Aberconwy had a Cistercian abbey, whose remains are thought to be incorporated in the present parish church of Conway which replaced it as part of King Edward I's series of new towns and castles, and the monks were transferred to a new site at Maenan, further up the river Conwy. With them they took the stone coffin and bones of Prince Llywelyn the Great - the coffin can still be seen in the church at Llanwrst.

The origins of the Cross Gneth, also known as the Croes Naid, remain obscure. It was a reliquary containing a piece of wood believed to be from the True Cross on which Christ had died. It may have derived its name from a priest, Neotus, who supposedly brought the piece of the True Cross to Wales. It is not known when it first arrived in Gwynedd or how the Princes had inherited it, but it is possible that it was brought back from Rome by king Hywel Dda following his pilgrimage in about 928. According to tradition it was handed down from prince to prince until the time of Llywelyn the Last and his brother Dafydd.

The Alms Roll of 1283 records that a cleric named Huw ab Ithel presented this "part of the most holy wood of the True Cross" to King Edward I at Aberconwy. It then accompanied the king as he finished his campaign in north Wales before being brought to London and carried through the streets at the head of a procession in May 1285 which included the King, the Queen, their children, magnates of the realm and fourteen bishops.


The relic was first taken to Westminster Abbey. King Edward I regarded the relic as his own personal property, taking it with him on triumphal progresses through England, Wales and Scotland. During the reign of his son, King Edward II, it was lodged for safety in the Tower of London, where it remained until 1352, when it was given by King Edward III to his newly founded College at Windsor. This was soon after the foundation of the Order of the Garter in 1348. It was to prove an excellent source of income for the Dean and Canons, who benefited both from its prestige (it was accounted the ‘chief treasure’ of St George’s Chapel) and from offerings from the constant stream of pilgrims who came to Windsor to pray before the famous relic, and it remained the focus for pilgrimage and devotion for over two centuries.


In the easternmost bay of the south aisle of the choir of the present chapel is a carved and painted boss which represents King Edward IV and Richard Beauchamp, Bishop of Salisbury 1450-81and also Dean of Windsor 1477-81, kneeling on either side of a Celtic cross which stands on a small mound: this then is the ‘Cross Gneth’ or ‘Croes Naid’.

This beautifully carved and brightly coloured roof boss, to be found in the easternmost bay of the South Quire Aisle, depicts one of St George’s Chapel’s most famous relics, the Cross Gneth. Kneeling on either side of this Celtic cross are King Edward IV and Richard Beauchamp, Bishop of Salisbury, 1450-1481, Dean of Windsor, 1478-1481, and Chancellor of the Order of the Garter, 1475-1481.

In addition, one of the carved angels surrounding the east window holds a Celtic cross and a further coloured boss in the Nave also depicts a Celtic cross.

Below the boss with its depiction of the Cross, the King and the Bishop there are two recesses opposite one another. Below the one on the north side of the aisle is carved an inscription, with the letters delineated in black. It reads as follows:

Who laid this book here? – The Reverend Father in God Richard Beauchamp, Bishop of this Diocese of Salisbury.
And for what? – For this purpose: that priests and ministers of God’s church may use it, saying by it their divine service, and for everyone else who wishes to use it to say their prayers.
Does he ask for any spiritual gift? – Yes, as much as Our Lord wishes to reward him for his good intention, beseeching every man whose duty or prayers are eased by this book to say for him this common prayer: Domine Jesu Christe, kneeling in the presence of this holy cross, for which the Reverend Father in God named above has granted from the treasure of the Church to every man 40 days’ pardon.

The book which would once have lain in the recess was probably a copy of the Sarum Porthos, or Breviary – a liturgical book containing prayers, hymns, psalms and readings according to the Sarum Use, the variant of the Catholic liturgy most widely used in medieval England. A case containing a modern day prayer book now stands in the recess. The ‘Holy Cross’ referred to in the inscription is the Cross Gneth, which is thought to have been displayed in the other recess, and from which its size can be estimated.

The ‘treasure of the church’ is the Treasury of Merit accumulated by Christ and the good works of Catholics, by means of which indulgences may be granted to individuals to reduce the punishment they will experience in Purgatory. In this case, praying before the Cross Gneth  - ‘knelying in the presence of this holy Crosse’ - would earn the amount of pardon equivalent to that gained by forty days of penance.
On the construction of the new St George’s Chapel in the fifteenth century, the boss was installed (in about 1480) as part of the vaulting above the altar and shrine dedicated to the Cross Gneth, which was to be moved there from the old Chapel to the east. What better way could the King, who commissioned the new Chapel, and the Bishop of Salisbury who as Master and Surveyor of the Chapel oversaw its construction, be celebrated in stone, or draw attention to devotion to the Cross?

Listed in the 1534 inventory of the treasures of the Chapel made during the reign of King Henry VIII the Cross remained at Windsor until 1552 when it was confiscated by King Edward VI’s Commissioners, along with the other relics and treasures belonging to the Chapel, and which seem to have ended up in the Tower of London ‘awaiting the King’s further instructions’.


In recent years some Welsh Nationalists have agitated for the return of the Cross. For that, alas, there can be little hope - such a reliquary was, no doubt, less durable than the Stone of Scone has proved itself to be.

In 1963 the post of Wales Herald Extraordinary was established and in 1967 he was assigned a badge, which shows the Cross Gneth encircled by a thirteenth century crown. 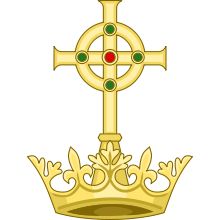 The Cross in the badge of Wales Herald Extraordinary