Today is the 575th anniversary of the death of the Holy Roman Emperor Sigismund in 1437. Born in 1368 a younger son of the Emperor Charles IV he became King of Hungary by marriage, King of the Romans and, ultimately, Holy Roman Emperor by election and King of Bohemia by inheritance. 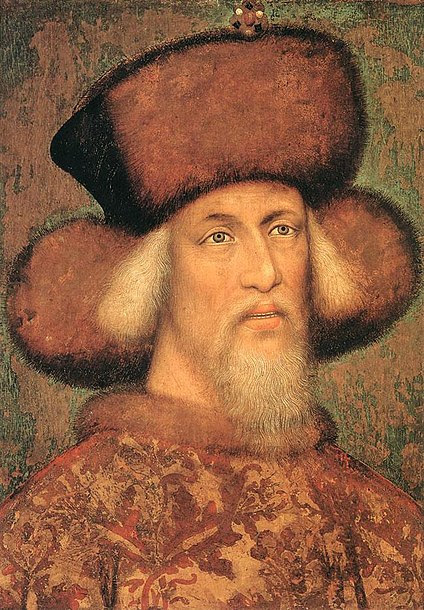 The painting is attributed to Pisanello and shows Sigismund at about the age of 50, that is about 1418.
He appears to have reqularly worn a hat of this type as he is always depicted wearing one.
Kunsthistorisches Museum Vienna

There is an illustrtaed online life of him here.  He played amajor part in convening and supporting the Council of Constance in 1414-18, and travelled to Spain, France and Englandin 1416 to secure the adhesion of the Iberian kingdoms to the Council and to negotiate with the government of King Charles VI of France and with King Henry V. Initially this was mediation in the wake of King Henry's success at Agincourt the previous year, but when he came  to England he entered by the Trearty of Canterbury into alliance with King Henry.He was feted in England, and the monarch's exchanged gifts and honours, including Sigismund being made a Knight of the Garter. He gave, inter alia relics of St George to the chapel of the Order at Windsor


One aim of the allaince was to pursue Church reform ahead of the electuion of a new, unquestioned, Pope. However in the autumn of the following year the English King deceided to fall in with other realms and support the elction of anew pope following on from what had been achieved in the way of reform. So it fell to Richard Fleming, by then a leading figure in the English delegation at Constance to tell Sigismund of the change in English policy. In the weeks that followed Cardinal Colonna became Pope Martin V and Richard Fleming entered the Apostolic Household.

In the summer of 1422 Fleming, bu now Bishop of Lincoln, was sent on a diplomatic mission by King henry to woo poloiticala nd miliatry support from the Elector Palatine and the three Archbishop Electors and to attend the Imperial Diet Sigismund had summoned to Nuremburg. It was whilst this was meeting that King Henry V died and Fleming returned home.

A link with Sigismund's visit in 1416 survives in York in the city's Sword of State. Granted the privilege by King Richard II of the sword and a cap of mainatence to indicate its rank as a city and county of the city, the civic authorities were given the sword by Henry Hanslap, a native of York, and canon of Windsor in 1439. Two years earlier when the Emperor Sigismund died his Garter stall at St Georges was dismanted and the sword and helm removed from the chapel, passing to the
Dean and Canons of Windsor. The Dean later gave it to one of his canons,  Hanslap, who then  presented it to his native city in 1439. The sword was redecorated in 1586, as is recorded on the blade, and has been frequently repaired. 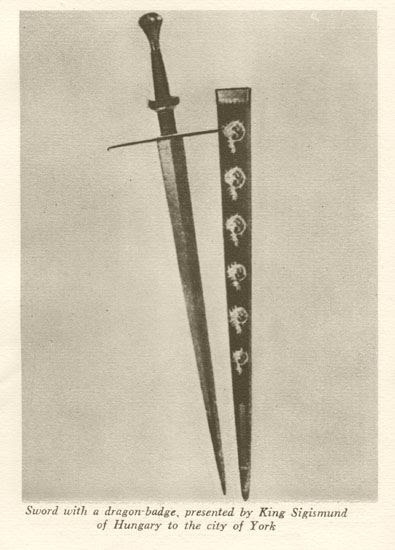 The Sigismund Sword
The Dragons refer to the Order of the Dragon, founded by Sigismund as King of Hungary

The Sigismund Sword is presented to The Queen on her visit to York for the Royal Maundy service this year.
The Swordbearer is wearing the other distinctive piece of insignia of the City, the Cap of Maintenance

The Sword of State, Cap of Maintenance and Mace