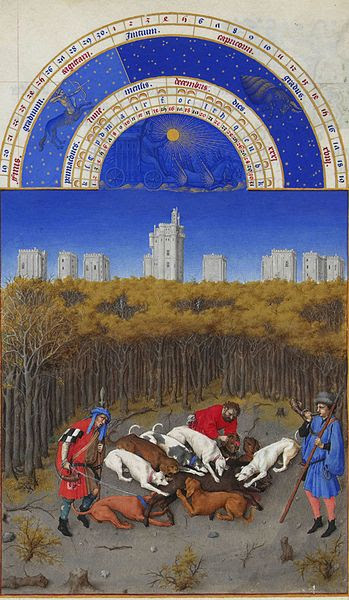 The December calendar page from the Très Riches Heures is attributed to Paul Limbourg. In the foreground is a hunting scene. Judging from the way the dogs are crowding around the quarry it is difficult to know if much will be left for the feasting it may be intended for in the chateau - but perhaps that is just artistic licence.

In the background is the great French royal palace-fortress of Vincennes. this had originated asa  hunting lodge for King Louis VII about 1150 but had become a major royal residence during the thirteenth century. The donjon in the centre of the view was built by King Philip VI in 1337, and is the tallest building of its type in Europe. It was in the donjon that King Henry V was to die in 1422, only a few years after the minature was painted.The towers on the surrounding curtain wall were reduced to the height of the walls with one exception in the early 1800s.

There is more about the history and architercture of the building  to be read at the link Château de Vincennes.