St John the Evangelist at Ephesus

Today is the feast of St John, Apostle and Evangelist who supposedly died circa 100.

Traditionally in depictions of the events of the Gospels St John is usually depicted as a youth. I was struck by the point made by a commentator on my post from last year that he considered it possible that John was only in his early teens, very much still a boy in our terms. Thinking about it that seems psychologically reasonable in the accounts we have of him and his family. A youth like that might well manage to slip into the High Priest's palace, and have the lack of adult nerves to make his way to the foot of the Cross. His very youthfulness makes the Virgin's desolation all the more poignant - she is given, and given to, a mere teenager.

When James and John's mother pressed Our Lord for places of honour on their behalf or their reputations as Sons of Thunder do we again see the stresses and certainties of youthful zeal and a mother anxious for her still young sons to do well - especially if, as long standing tradition would have it, she is Our Lord's maternal aunt and they His cousins?

I am inclined to think of all the Apostles, or at least most of them as young men. Artists have often shown them as older than Our Lord, but both the evidence of their later lives, and the written accounts of their actions when given the choice of following Christ suggest men who were young, eager, but still constrained by the enthusiasms and uncertainties of youth or early manhood. Seeing them in such a
light makes their recorded reactions more readily understandable and the account in the Gospels more credible.

The rest of this post is based on a piece by John Dillon on the Medieval Religion discussion group, with a few adaptations of my own.

John, "the beloved disciple", was brother to the apostle James son of Zebedee (James the Great). In the (pseudo-)Hieronymian Martyrology and in the Latin Calendar of Sinai (ca. 800) both are celebrated on this date. In late antiquity and throughout the Middle Ages it was believed that John the Apostle, John the Evangelist, and John the Divine (John the Theologian), the author of the Apocalypse, were one and the same person. Despite some modern doubts, this is also the position of the Roman Martyrology. All the Johannine writings other than 2 and 3 John were usually ascribed to this one John.

Many legends of John go back to an origin in a probably later second-century aprocryphal Acts of John that circulated in Greek and in other languages and that was condemned by the Second Council of Nicaea in 787. A fifth- or sixth-century Acts of the Apostle and Evangelist John the Theologian supposedly written by his disciple St. Prochorus (BHG 916-917; Latin translation, BHL 4323) was likewise very influential. Somewhat similar in approach but substantively rather different is a legendary Account of John in Syriac (BHO 468). Legendary anecdotes of John occur in many other locations.

Apart from a period of exile on Patmos (preceded by arrest and transportation to Rome for interrogation, as in the story of St John before the Latin Gate, celebrated in the Calendar in May), John's legendary apostolate was conducted from Ephesus - where, of course, he lived with Our Lady. He is also said to have died there and a legend grew up that once he had been buried his body disappeared into the surrounding earth (John's metastasis). The sands over his grave were said to move; the tomb that was built above it gave forth on his feast day a healing, dust-like manna collected by numerous pilgrims.

Here is a view of his tomb at Ephesus in the ruins of the remains of the Justinianic basilica that replaced an earlier chapel at the site and that lasted until late in the fourteenth century: 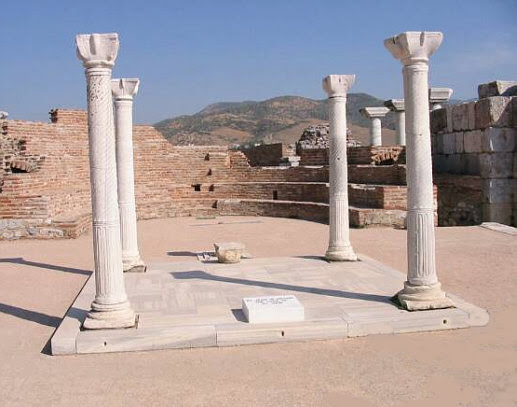 The tomb of St John in the ruins of the Basilica at Ephesus
Image:todayscatholicworld.com


The Sacred Destinations illustrated page on the history of this great church can be read here.

Another view of the reconstruction model of the Basilica at Ephesus