The cult of St Thomas in art

Today is the feast day of St Thomas of Canterbury, the anniversary of his murder in his cathedral in 1170. Last year I posted about some images of St Thomas in art - notably a statue at Chartres.
This year I am illustrating some of the images listed by John Dillon in his post for today on the Medieval Religion discussion group. This is only a personal selection from the great number of extremely interesting examples which he gave.

In part they illustrate, as did my post last year, the spread of his cult from Spain and Sicily to Sweden and Iceland - which produced an important source for his life in a Saga.  Devotion to him spread rapidly in the generation after his death and it remained widespread throughout the middle ages.

Kay Brainerd Slocum's Liturgies in Honour of Thomas Becket (University of Toronto Press, 2004) has a useful chapter (pp. 98-126) on the spread of Thomas' cult.

The chiesa di San Giorgio in Como has a reliquary case housing what is said to be part of Thomas' chin and some bones said to be those of St. Eutichius of Como. The reliquary and the relics can he seen here, here and here. The certificate from 1777 of a recognition of these relics can be seen here.

In Italy St Thomas appears in wall paintings such as this  thirteenth-century fresco of his martyrdom in Pavia's chiesa di San Lanfranco - given the connection with Canterbury this is perhaps not surprising:


A fresco of circa 1260 formerly in the episcopal place at Treviso in the Veneto and now in that see's diocesan museum shows the martuyrdom as well as King Henry II. In the first view, note the domes in the representation of Canterbury cathedral:it is thought that the artist was familiar with St Mark's in Venice.

The influence of Emglish clergy working in Scandinavia doubtless helps explain the presence of devotion to and commemoration of St Thomas there. Here are two photographs  of reliefs on the late twelfth-century baptismal font (ca. 1190-1200) in the church at Lyngsjö (Skåne län) showing King Henry II, the murderers, and St Thomas of Canterbury's martyrdom:


More views of this font are available here (scroll down to Døbefont):


The cult remained popular in Scandinavia into the later middle ages as is indicated by this  altarpiece statue in Härads kyrka, Härad (Strängnäs kommun), Södermanland: 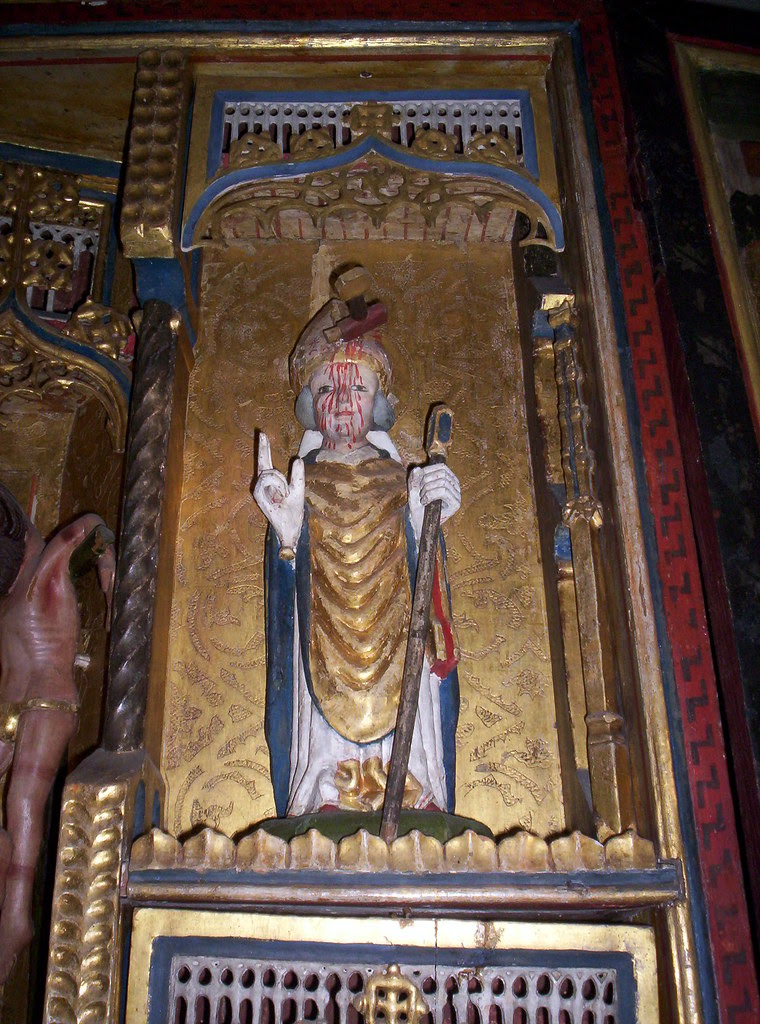 The great series of miracle windows at Canterbury - how did they manage to survive the destructive urges of iconocl;asts in the sixteenth and seventeenth centuries I wonder - as in the example here of Becket window 4 (circa 1215-1220)

Sens has close links with St Thomas as his home whilst in exile, and the cathedral preserves vestments which are said to have been his.

There is a link to an article in Vidimus with a discussion of, and some expandable views of, earlier thirteenth-century Becket windows at Sens and elsewhere which can be read here.

St Thomas remained popular with commissions fromn glaziers, and despite King Henry VIII's proceptuion of his image, many examples still survive. Here is a fine early fifteenth century one from York Minster: 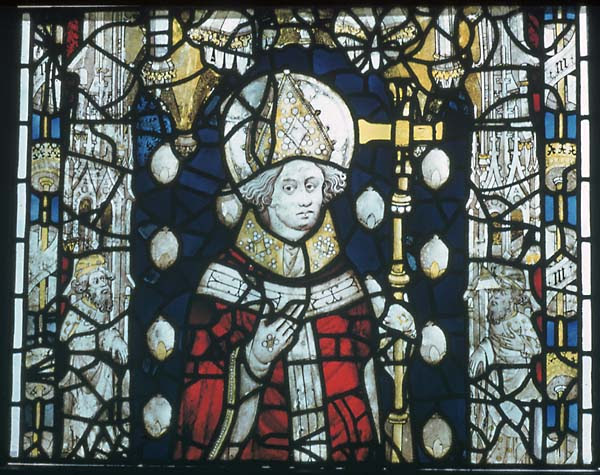 St Thomas of Canterbury as depicted in the north choir aisle of York Minster (panel 5b of window nIX )
Given by Thomas Parker, circa 1415-1420

Here are two scenes from Meister Francke's  early fifteenth-century Altarpiece of St. Thomas Becket , probably commissioned by the English community in Hamburg and dated to 1424-36, and now in the Kunsthalle in Hamburg: 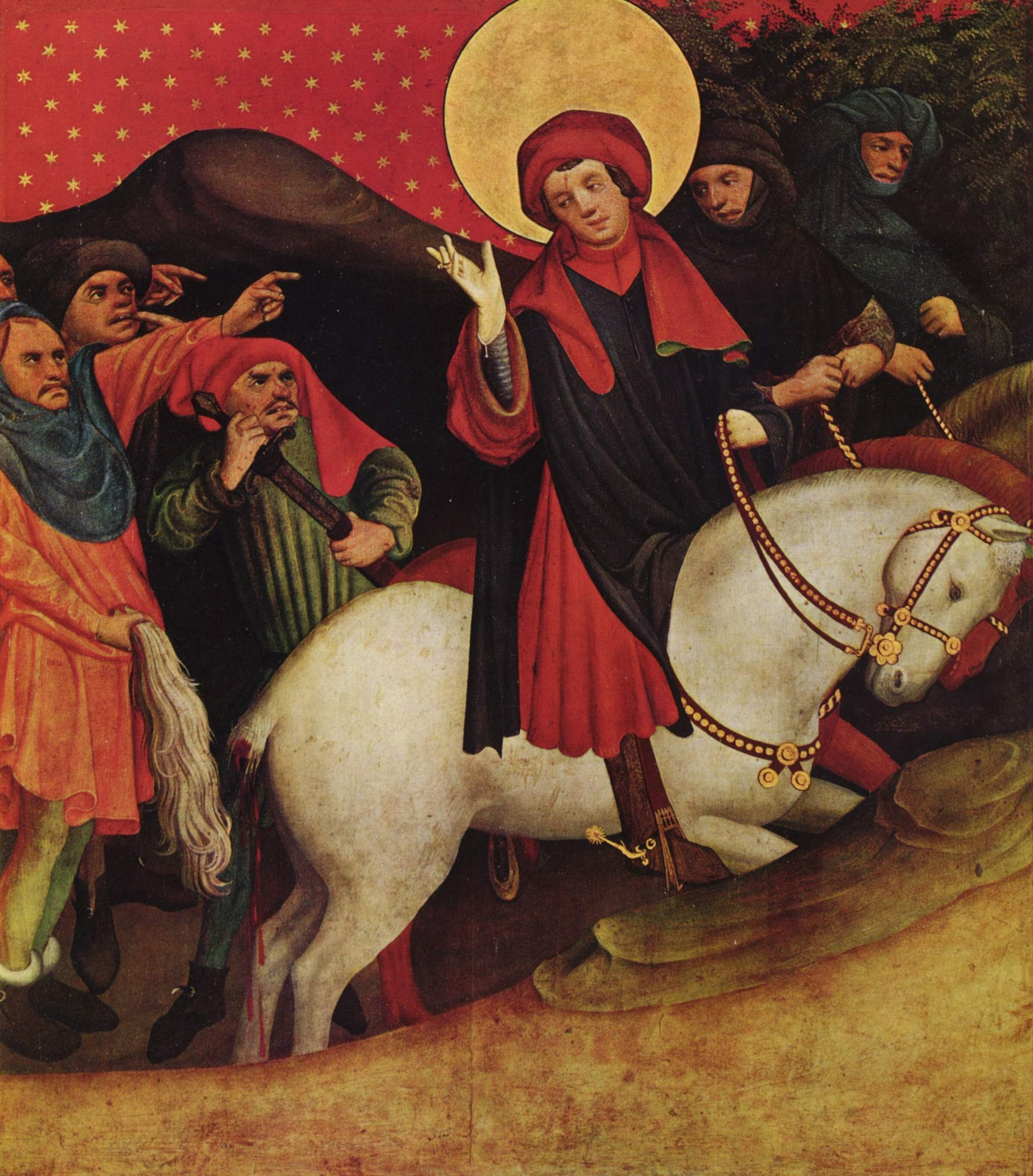 Archbishop Thomas enters into Canterbury - an interesting depiction of how in the fifteenth century a bishop might appear when travelling: 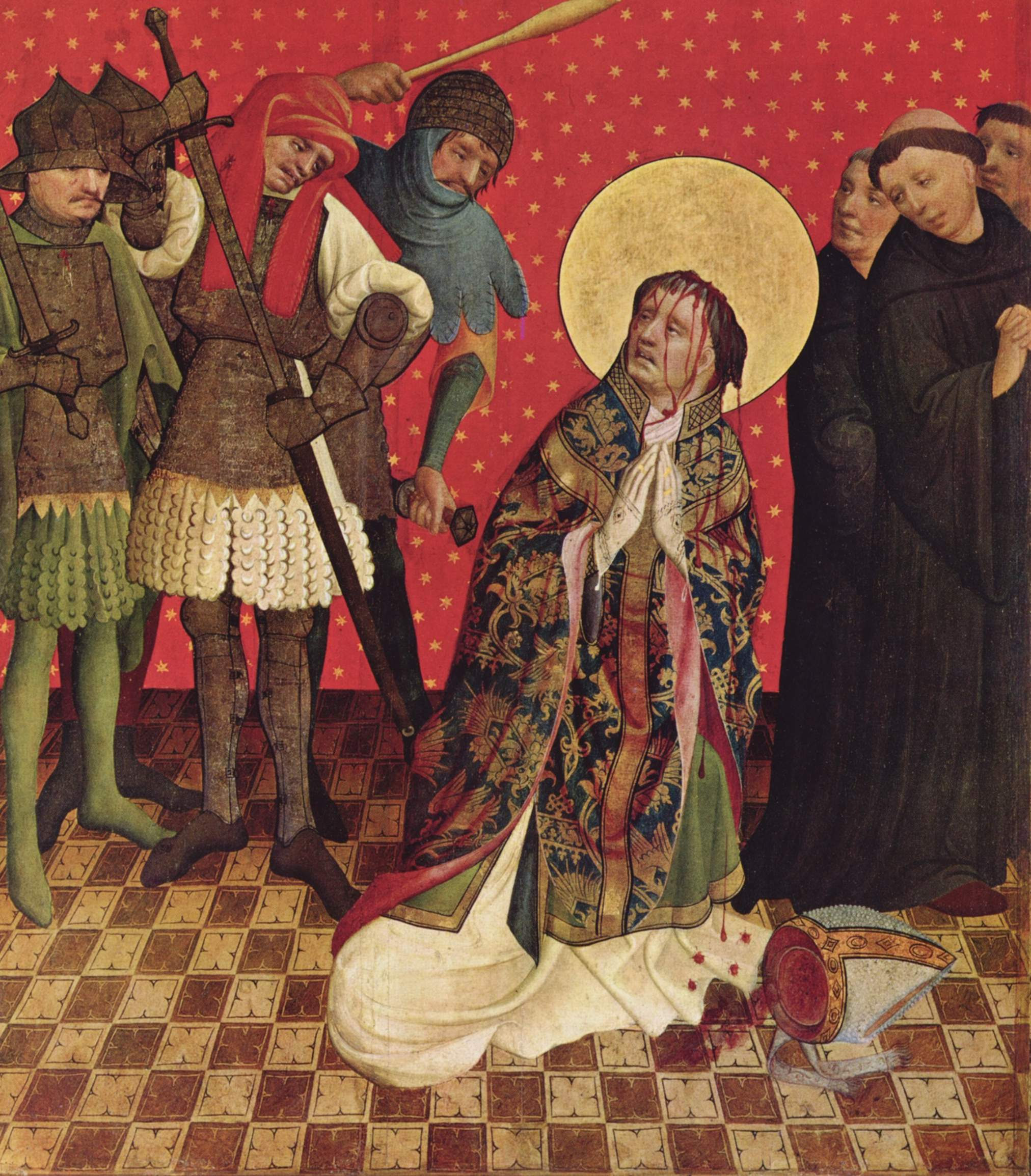 The martyrdom of the Archbishop

There is an article about Meister Francke here.
Posted by Once I Was A Clever Boy at 11:06