Today is the 625th anniversary of the battle of Radcot Bridge - although I see some modern books give December 20th as the date; I am not sure as to the reason for this. Radcot Bridge lies on the upper Thames, between Chipping Norton and Faringdon.

In the battle the Royalist troops led by 25 year old Robert de Vere, ninth Earl of Oxford, who had been created Marquess of Dublin in 1385 and Duke of Ireland in 1386 by his friend King Richard II were defeated and scattered at Radcot Bridge by the forces commanded by the 21 year old Earl of Derby, the future King Henry IV, on behalf of the Lords Appellant. The Duke, who fled by swimming the Thames and taking refuge in France and then at Louvain, had been attempting to bring troops from Cheshire to the aid of the King who, as a result, was left without support against the demands of the Lords Appellant. The result was to be the Merciless Parliament of 1388 and the execution or exile of many of the King's closest allies and agents in his household. The Duke of Ireland died at Louvain, still in exile. in 1392. 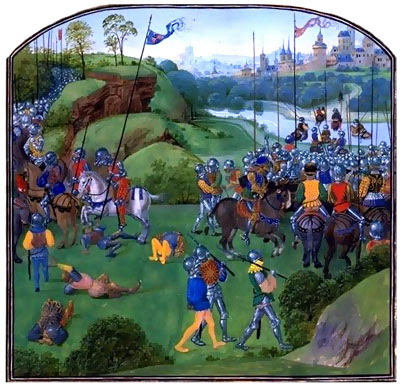 A late fifteenth century depiction of the battle

There is an online article about the battle here, which could do with a bit of editorial tidying, and one about the history of the bridge itself and its surroundings here. 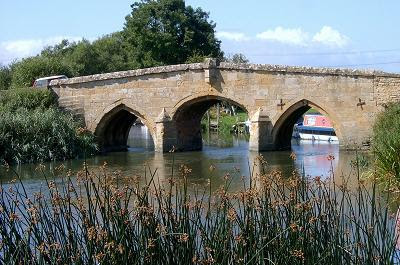 Radcot Bridge
Image: Thamespath.com
Radcot Bridge is still substantially the one which was at the centre of the battle, although considerably repaired following damage sustained in the fighting, and in 1393 was given a memorial cross to those who died.
There is an online account, with links, of the life of the Duke of Ireland here  and the recent biography of him by Anthony Tuck from the Oxford Dictionary of National Biography can be read here. I am not aware of the source for this print - Horace Walpole's collection was extensive and important, but the attributions not always certain.