St Barbara in art and architecture

Last year I posted a piece on this her feast day about St Barbara and thought that this year I would share some more images of her they are taken from a post by John Dillon on the Medieval Religion discussion group. A relatively recently restored later fourteenth-century (circa 1380) polychromed wooden statue of St Barbara from the church of St. Thomas (Sv. Tomáš) near Frymburk (Český Krumlov dist.)
in the Czech Republic, now in the regional Museum in Český Krumlov following restoration in 1997-8. 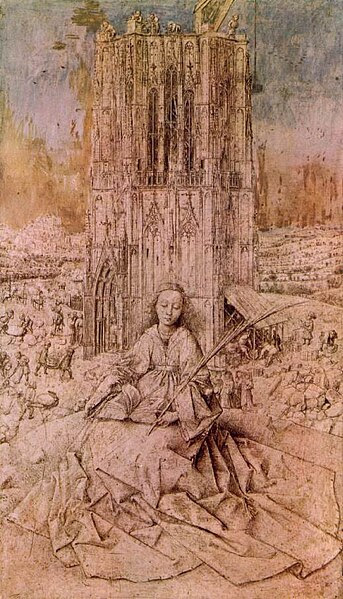 St Barbara holds the palm of martyrdom in front of her tower
Jan van Eyck, 1437
Silverpoint on paper
Royal Museum of Art, Antwerp

Probably the finest later medieval church dedicated to her is the church of St Barbara at Kutna Hora in Bohemia.

A mining town it began this great church to the patroness of miners in 1388 but it was not completed until 1905. There is an account of it here. It is of the wonders of later medieval central European gothic architecture and there are some fine photographs of the vaults here.