I am observing today as Ascension Day, and will, if plans work out, be able to attend two Extraordinary Form Masses here in Oxford to celebrate the feast. I personally prefer to keep the feast today, though I am quite happy to celebrate it all over again on Sunday - or do I mean the Sunday in Ascensiontide? It is one of my favourite days of the calendar, and rich in imaginative imagery.

However, looking online, I realise that depicting the Ascension has proved rather surprisibgly difficult for artists. There are, of course, the ratehr delightfully naive medieval depictions of Our Lord's feet disappearing into a cloud as the apostle slook on - as in the boss in the nave of York Minster dating from the early fourteenth century (replaced after the fire of 1840 from drawings of the original).

The other main types are those of the icon tradition, and the swirling figures and drapery of the Baroque. 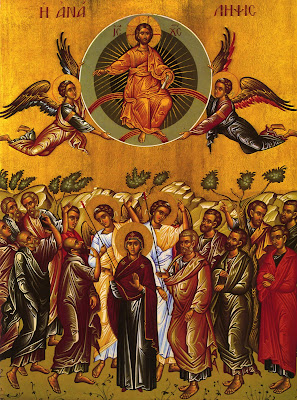 This tradition continued in manuscrpts as well as icons for centuries, even when presented with greater animation as by Giotto (1267-1337) in the early fourteenth century. Nonetheless there is an awkwardness in the central figure:

Noneteless the hierarchical tableaux vivante deriving from the icon tradition was still powerful at the end of the fifteenth century as in   Pietro Perugino's painting of 1494-98: 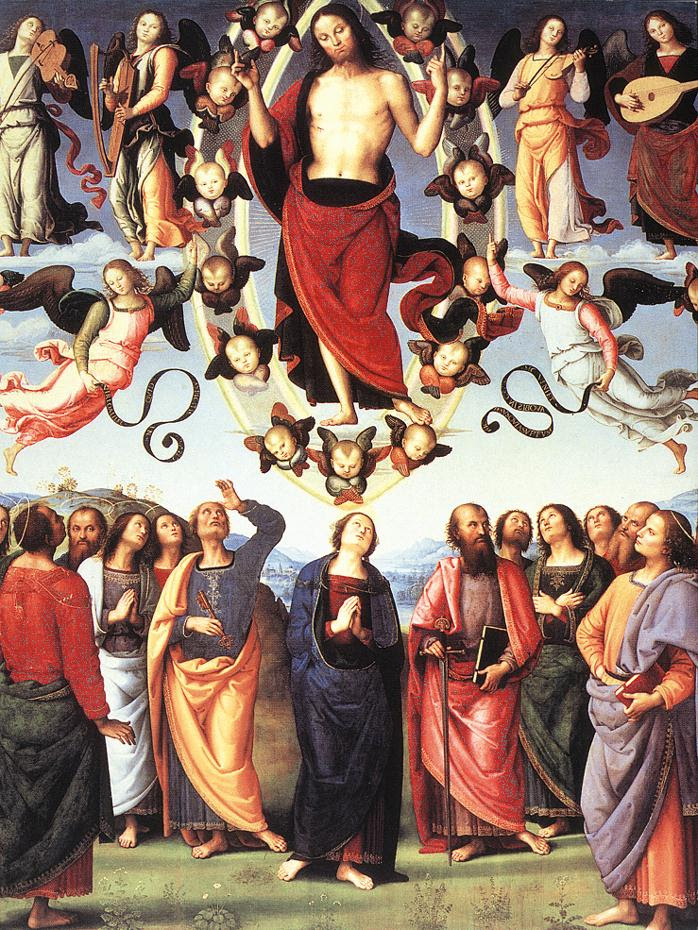 Tintoretto's painting, begun circa 1576 and completed in 1581 conveys a dynamic energy lacking in other representations: After that the full Baroque style developed, with which we are familiar. The results may be impressive - and indeed seem designed for architectural settings in churches with soaring columns and soaring music to accompany the liturgy - but they can at times be accidentally somewhat comic in their effect. They appear to be more concerned with the mechanics of the ascension rather than with its theology, whereas the earlier tradition tended to place the emphasis on the theology at the expense of narrative, or at least naturalism.

However there is one painting which does, to my mind, manage to combine both theology and naturalism in its narrative of the Ascension, although it is not simply a depiction of that event alone in the economy of Salvation - and I shall write about it in my next post...