I did not manage to see the State Opening of Parliament on television yesterday.  However one passage in what commentators have seen as a legislatively uninspiring Queen's Speech which has attracted some comment is about plans to amend the rules regarding the Royal succession. 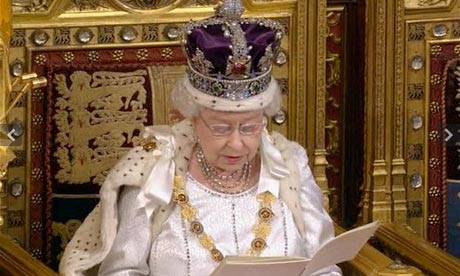 The Queen reads the speech at the State Opening of Pparliament yesterday .
Image: BBC


My government will continue to work with the 15 other Commonwealth realms to take forward reform of the rules governing succession to the crown.

This may indeed suggest that what was spoken of as having been agreed last autumn is still under discussion. However if plans are moving ahead it is in some ways very suitable for Jubilee Year.

From what has been announced previuiosly there are three parts to the propsed changes, which would apply.

The rule whereby male primogeniture ensured a younger son would have rights over an elder sister would be removed, and succession would proceed simply in order of birth, irrespective of the sex of the individual. This cahnge would not rbe retrospective - so no change in the existing line of succession.

The ban on marrying Roman Catholics, dating from 1701, would be repealed, although there appeared to be a retention of the fact that the Sovereign, as Supreme Governor of the Church of England, could not be a Roman Catholic.

The requirement under the 1772 Royal Marriages Act for descendents of King George II to seek the Sovereign's approval for their marraige would only apply to the six persons in immediate line of succession to the throne.

Of these proposals I would be inclined to leave the privilege in favour of males unchanged. A friend made the point that to talk of equality or fairness in respect of what is, of its very nature, a selective, elite institution is to risk undermining an aspect of its traditional base without any real gain. However this really turns on matters of human genetics, and on the basis that for the last 124 years out of 175 we have been well and wisely ruled by female sovereigns, not an overly serious issue. Nonetheless I would be inclined to leave well alone here.

Allowing marriage to Roman Catholics is fair - here that argument does I think apply, particularly given the respective numbers of practising believers amongst the Crown's subjects - and one that I have held since long before I personally became a Catholic. If we ever see a return to dynastic marraiges then this widens the available number of potential spouses.

As to the 1772 Marriage Act - well, inevitably the six nearest the succession is going to be a fairly changing group, and in the absence of a House Law on the lines of those of German dynasties, it does provide a system of regulation. I would again be inclined to leave well alone.

Now with all that said I will engage in a few little flights of fancy... The Clever Boy does not really take to the idea of counter-factuals in history, and is inclined to the view that they are only really of use to enable us to reconstruct the possible options facing people in the past which we have forgotten.

However, the Clever Boy has indulged in a few relections as to what would have happened in the past if females had had equal rights of succession with their brothers.

The last time this would have affected the succession would have been in 1901 when Queen Victoria I would have been succeeded by her eldest child, Queen Victoria II. We might assume that had such rules then applied she would not have been married off so as to become German Empress and Queen of Prussia. Nonetheless we will proceed with out excursus... With her death later that year the Crown would have passed to her eldest child King William V - otherwise known as Kaiser Wilhelm II. Now such an Anglo - German condominion would have resolved tensions in Wilhelm himself - see Giles McDonagh's very readable biography - and also such little matters as the naval rivalry of the years up to 1914. From him, after his death in 1941, the succession would have passed through to his son William VI/Wilhelm III, and through his son, also Wilhelm, killed in 1940, and then to his daughter in the next generation, Princess Felicitas (d 2009) and now to her daughter Princess Friederike.

Before that the previous instance of daughters preceding sons might be seen as post factum validation for Queens Mary II and Anne displacing their half-brother the de jure  King James III and VIII in either 1688-89 or 1701.

Earlier than that in the Stuart period is the possibility of what would have happened at the death of King James I and VI in 1625. Then, under such rules as are proposed he would have been succeeded by his daughter Queen Elizabeth II and I, rather than his younger son King Charles I. Well we might have avoided the series of Civil Wars of his reign, but at the cost of being drawn into the Thirty Years War which started with Elizabeth's husband's election as King of Bohemia in 1618.... On her death in 1662 the Crown would have passed to her son  Charles I Louis, Elector Palatine (d.1680)  - a man of a rather doubtful character who played an equivocal role in the English Civil War ( unlke his brothers the Princes Rupert and Maurice ) - and might have reigned as King Charles I, to be succeeded by his son as King Charles II and then by the latter's sister Elizabeth Charlotte Duchess of Orleans. Through this formidable lady (Queen Elizabeth III and II?) the succession would have descended to the House of Orleans, and a potential Anglo-French Monarchy under Louis Philippe...

From a quick scan of the genealogy available online this would, I think, now result in the daughter of the late Duke of Aosta being Queen - Margherita Isabella Maria Vittoria Emanuela Elena Gennara (born 7 April 1930). She married on 28 December 1953 HI and RH Archduke Robert, styled Archduke of Austria-Este (1915–1996), second son of the Emperor Karl I and has issue three sons and two daughters. Margherita's eldest son HIRH Lorenz, Archduke of Austria-Este acquired the title Prince of Belgium (from 10 November 1995) by virtue of his marriage to HRH Princess Astrid of Belgium, only daughter of King Albert II of Belgium. Their two sons and three daughters are members of the Belgian Royal Family. After them in line of succession would be Princess Margherita's sister Maria Cristina Giusta Elena Giovanna (born 10 September 1933 at Miramar), who married on 29 January 1967 HRH Prince Casimiro of Bourbon-Two Sicilies, descended from Spanish princes (of the House of Bourbon or Borbon) ruling in Sicily, and has issue two sons and two daughters.

Previous to this scenario, in 1547 ( allowing for minor problems of legitimacy)  Queen Mary I would have succeeded King Henry VIII, and then Queen Elizabeth I, with no King Edward VI at all - and no nasty radical Protestant reformation...

Back in 1483 - well there would have been no King Edward V and Richard Duke of York and Norfolk for their uncle Richard Duke of Gloucester to worry about, but rather Queen Elizabeth I - but then, in the end she married King Henry VII...

And finally, in 1135 the Empress Matilda (or perhaps dowager Queen of the Romans) would have become undoubted Queen after her father King Henry I, and no trouble from cousin Stephen, but King Henry II would have had to wait to succeed his mother until 1167 ....


Now is that all entirely clear? Questions may be asked later...

A very intricate strand of many threads - something to ponder! thankyou -
Valerie, NZ.