Yesterday I travelled with a friend northwards, and just across the county boundary into Warwickshire, having been invited for lunch by friends at Long Compton. The journey took us past Blenheim Palace and through Woodstock, and past the turnings to those other great early eighteenth century Oxfordshire country houses, Ditchley and Heythrop Park, and eventually past also the turnings to Great and Little Rollright, and the nearby Rollright Stones, and so we descended the long hill into the village at Long Compton.

It is typical village of the Cotswold area, with a handsome medieval church, and a local tradition of witchcraft - well in the past anyway. I gather from abit of online research that the village was apparently notorious for witchcraft. Local belief in the power of witches continued until well into the twentieth century. In 1875, a Long Compton man slew one old woman with his sickle because he was convinced that she had caused the debilitating pains and cramps in his legs.

Tradition also claims that in the sixth century St Augustine visited the church and raised a man from the grave. 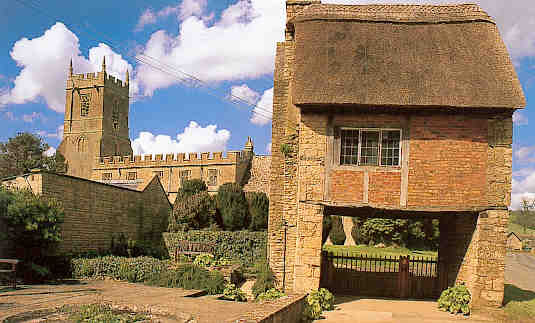 The whole journey was an exercise in a reading of the passing scene in the best traditions of W.G.Hoskins and The Making of the Engliah Landscape. I really always mean after such a day out to read up more about the history of the area, but so often fail to do so.

We had a most enjoyable lunch and spent time sitting and talking with our friends in their garden, before driving back, this time in clear sunlight and with a detour across towards the Banbury road which took us through rolling countryside, lush after the recent rain and displaying a wonderful range of foliage greens, the hedgerows heavy with May blossom - which to my eye appeared much brighter in the sunlight of late afternoon than it had during the overcast morning - and the verges thick with cow parsley, or, to give it its more romantic names, Our Lady's Lace or Queen Anne's Lace.

This was both a chance to spend time with friends and an opportunity to see the English countryside as one imagines it to be, but often fears that it is no longer. Howevere in this part of the country at least the trees and hedgerows flourish and it is possible to look at a landscape unascarred by pylons, windfarms, television masts, chimneys... This is still the England of rural life and of popular fiction - one could people the places we passed with any number of plots and scenarios. The whole day was a tonic to the mind, the spirits and the palate.