The apparition of St Michael the Archangel

Although September 29th is the principal feast day of St Michael the Archangel today is the feast that commemorates his late fifth century apparition at Gargano on Adriatic coast of Italy - the spur of Italy - and the geginning of devotion to him there. It is said that the sanctuary dedicated to him there is the only church not dedicated by a bishop but by the Archangel himself - although a similar story was told in the middle ages of Westminster Abbey being consecrated by St Peter himself during a nightime visitation.

The feast of the Apparition entered the Roman Missal as aunversal feast with Pope St Pius V in 1570, but does not occur in the 1970 Missal.


Something of the theology and history of the cult of St Michael can be read in this online article.

Coincidentally Prof Georgi Vasilev of the State University of Library Studies and Information Technologies in Sofia Bulgaria recently posted on the Medieval religion discussion group some extracts from medieval apocrypha (basically coming from East) including the  "Apocryphal oratione of St. John Chrysostom how Michael, chieftan of the celestial army defeated Satan" which is rather popular. Here is a brief citation from the old Bulgarian version (the original source is Greek):
:
After Gabriel fails to sum up courage to fight with Satan, the Lord forgave Gabriel and again said unto Michael: ‘You were first in the kingdom of Adam, who proceedeth from me, and it is thine today to go down to that vile antichrist and take from him the heavenly mantle, the crown and the sceptre of  angelic orders, which he stole from Me. And divest him of his beauty and glory so that his servants see who the Father is.”(Bulgarskata literatura i knizhnina prez XIII vek, p.151)

and from the Apocryphal text "The Tiberiad Sea":
And God sent Michael to Satan. And Michael went but was scorched by Satan and returned to God and said ‘I did what You sent me to do but the fire of Satan
fell unto me.’… And Michael came and struck Satan with the sceptre and threw him down
with all his army. And they fell three days and three nights like drops of rain. (Stara bulgarska literatura.I. Apokrifi, p.32 )

As Prof Vasilev points out this image is used by John Milton in Paradise lost. In his interpretation Messiah (Christ) is send by God instead of Michael:

Raphael continues to relate how Michael and Gabriel were sent forth to battel against Satan and his Angels. The first Fight describ’d: Satan and his Powers retire under Night: He calls a Councel, invents devilish Engines, which in the second dayes Fight put Michael and his Angels to some disorder; But, they at length pulling up Mountains overwhelm’d both the force and Machins of Satan: Yet the Tumult not so ending, God on the third day sends Messiah his Son, for whom he had reserv’d the glory of that Victory: Hee in the Power of his Father coming to the place, and causing all his Legions to stand
still on either side, with his Chariot and Thunder driving into the midst of his Enemies, pursues them unable to resist towards the wall of Heaven; which opening, they leap down with horrour and confusion into the place of punishment prepar’d for them in the Deep: Messiah returns with triumph to his Father.
(Paradise Lost, Book VI. The Argument)

By another coincidence I am reminded of a conversation last week with someone who was asserting that there had beena feminization of religion in the nineteenth century, and cited in evidence religious art. Setting apart bad religious art - and of that there was a lot produced then - I disagreed strongly as to the dating of the changes in iconography he had in mind, as well indeed with his whole argument.

Had I thought I should have drawn attention to the image of St Michael. Long before the Baroque, let alone popular religious art such as many prayer cards, the Archangel was often depicted as a rather androgynus figure. Thus, in examples drawn from my own particular period of interest and enthusiasm, one can find many examples of this, although in this English alabaster of 1430-70 he appears very robust attacking the dragon of evil whilst weighing souls: 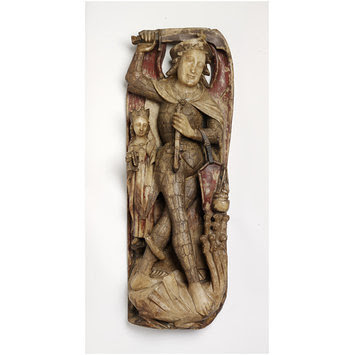 However contemporary art from Catalonia and the Netherlands suggests a more complex angelic personality. Here is a small selection of such images chosen from a great wealth of such examples from both regions: 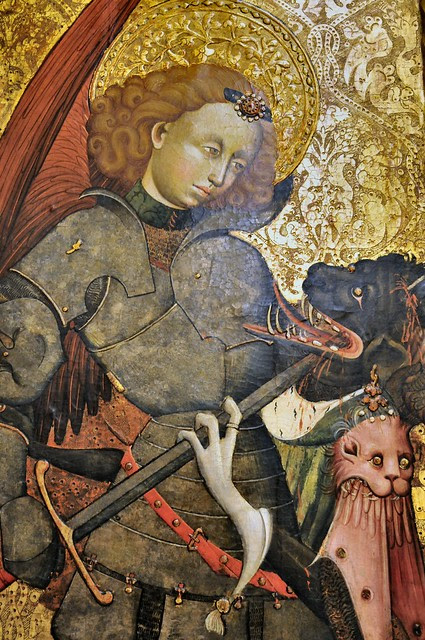 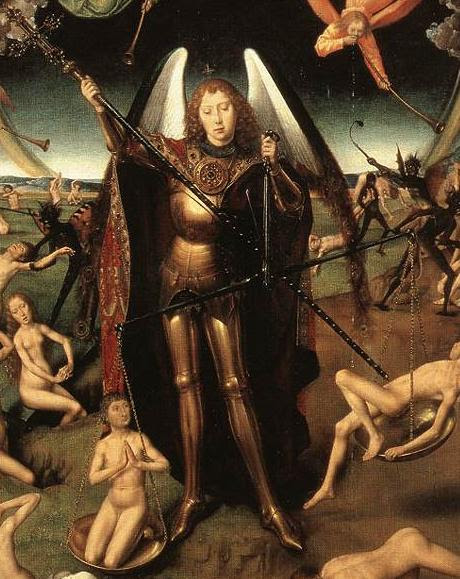 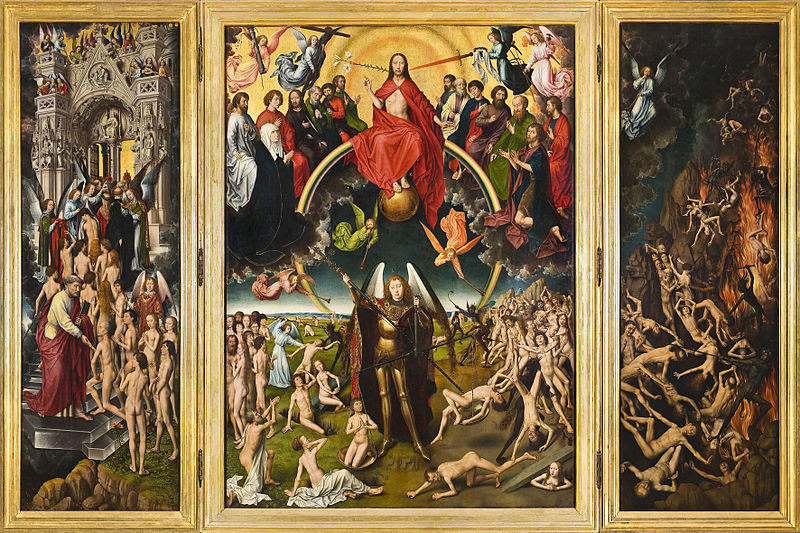 
I assume the convention originates in an attempt to convey the beauty of holiness contrasted with the ugliness of evil, but the result has a definitely feminine quality to it, indicating the sexlessness of non-corporeal beings. Nevertheless by the late medieval period the image appears established. The muscular Christianity of Epstein's St Michael at Coventry appears a much more modern concept.

On the basis of some of the paintings i have reproduced here it is probably best to be able to recognise St Michael - we are all likely to meet him on Judgement Day.

Einsiedeln Abbey was consecrated by Christ Himself, assisted by SS. Matthew, Mark, Luke, John, Peter and Gregory the Great. I wonder who the MC was . . .

My thoughts turn to names. I don't know any women called Michael.
Nor do I know any men called Michaela.
On the other hand, take the name Lesley or Leslie.
And how about Peter and Peta?
I once knew a woman called Robyn Hood.