The Crown of St Wenceslas


As today is the Feast of St Wenceslas it seems a suitable day on which to post about the Crown that bears his name, although, like that of St Stephen in Hungary is later in date than the actual life of the saint.

The Wikipedia article about it is here. I am reproducing, with a few adaptations, two passages from that article:

"[The] Crown of Saint Wenceslas is the part of Czech crown jewels (also called the Czech treasure) made in 1347. The eleventh king of Bohemia from the House of Luxembourg, and Holy Roman Emperor Charles IV [Charles I of Bohemia] had it made for his coronation and forthwith he dedicated it to the first patron saint of the country St. Wenceslas and bequeathed it as a state crown for the coronation of future Bohemian kings, his successors to the Bohemian throne. On the orders of Charles IV the new Royal Crown was to be permanently deposited in St. Vitus Cathedral in Prague Castle. It was used last time for the coronation of King Ferdinand V [Emperor Ferdinand I of Austria] in 1836."

"[A]n old Czech legend says that any usurper who places the crown on his head is doomed to die within a year, as the Crown is in personal property of St. Wenceslas and may only be worn by a rightful Bohemian King during his coronation."

Another Wikipedia article on the same set of links states that "[i]t was originally held in Karlstejn Castle, designed in the 14th century by Matthias of Arras. Since 1867 it has been stored in St. Vitus Cathedral of Prague Castle."

Another, independent, account says that Charles ordered a very rich crown to adorn the reliquary containng the skull of his predecessor and Bohemia's patron saint, St. Wenceslas. The crown was to be removed from the reliquary only for the coronation of the kings of Bohemia.

In the cross on the top is set a relic from the Crown of Thorns. The crown is inlaid with ninety one gems (emeralds, sapphires, rubies and amethysts) and twenty pearls and decorated with four large Fleur de Lys.

The Crown is but one example of the flowering of the arts in Bohemia under the Emperor Charles IV - a glittering period in the history of the kingdom which included the building of St Vitus Cathedral in Prague, including the shrine chapel of St Wenceslas, the castle at Karlstejn, and the foundation of the University of Prague - the Charles University. For a biography of the Emperor look here.

Here Charles as Holy Roman Emperor, and wearing the Imperial crown. In the painting, a votive picture of the Archbishop of Prague, John Ocko of Vlasim, by Theodore of Prague and circa 1370, and now in the National Gallery in Prague, he is depicted with his eldest surviving son and heir, Wenceslas IV, King of the Romans until he was deposed by the Electors in 1400, and of Bohemia until his death in 1419, accompanied by Charlemage and St Wenceslas (wearing the appropriate Ducal cap), kneeling before the Virgin and Child. 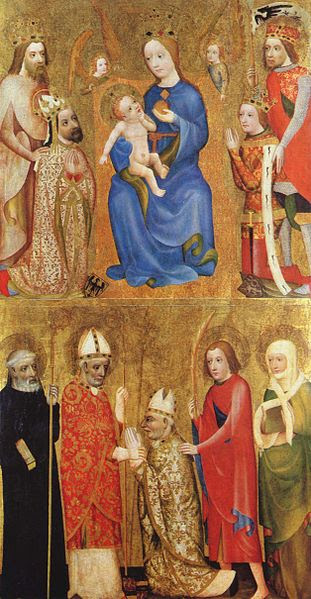 Here is a detail of the Emperor: At least one later Bohemian monarch was not overly impressed by the crown's appearance - on the eve of her coronation Maria Theresa described it in a letter as looking like a "fool's cap" - in other words a jester's cap.

The last Bohemian coronation was, as mentioned above, in 1836, but in September 1871 the Emperor Francis Joseph informed the Bohemian Diet of his willingness to take the Bohemian Coronation oath. The proposal, presumably as part of a plan to establish a relationship similar to that Austria had estanblished with Hungary by the coronation there in 1867 was abandoned due to protests from the German speaking population of Bohemia, who disliked the idea of rule by the Czechs. It is possible that had the Habsburg Empire survived in 1918 that Bl.Charles I and IV would have overseen some such similar process of devolution within his hereditary lands and that the Bohemian coronation would have been revived.

The term the "Bohemian Crown" applies to the lands dependent upon it rather than to the actual crown, as explained here. 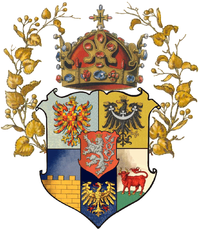 Coat of arms of the Bohemian Crown until 1635. Quarterly of five. 1.The checuered eagle of Moravia. 2 The eagle of Silesia.3 The wall of Upper Lusatia. 4 The eagle of Upper Silesia. 5 The ox of Lower Lusatia. An inescutcheon with the lion of Bohemia. Atop the arms is the Crown of St Wenceslas.

There is an illustrated list of the Dukes and Kings of Bohemia here. 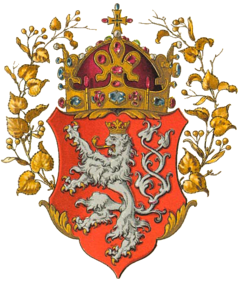 Arms of the Kingdom of
Bohemia