St Giles by Thomas of Coloswar

Following on from yesterday's post about St Giles here is another late medieval depiction of him. This painting is described as The Death of St Giles, but normally the incident is seen as not being fatal to the Saint, but the means whereby he was drawn to the King's attention. St Giles is usually represented as being wounded in the leg - hence his patronage of cripples - but the Master of St Giles shows him with wound in the hand. This version has a wound to the breast.

I have taken this piece from the Web Gallery of Art pages, and edited it slightly.

The Death of St Giles 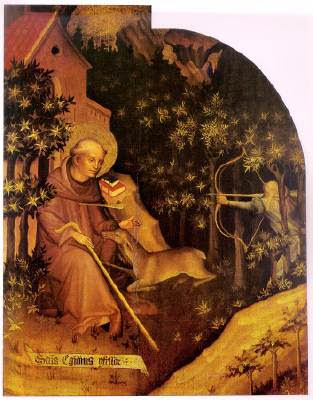 The picture shows one of the panels of the Garamszentbenedek Altarpiece.

Nicholas, a canon of Gyõr, who was also cantor of the royal chapel in Buda Castle, in 1427 commissioned Master Thomas, painter of Coloswar (Kolozsvár) to make a polyptych for the high altar of the Abbey Church at Garamszentbenedek (today Hronsky Benadik, Slovakia). Ending in a pointed arch, the central picture of the polyptych (which consists of nine panels) represents the Crucifixion, the internal wings are decorated with four episodes of the Passion and the external ones with scenes taken from the lives of several saints. (One of the latter has been lost, and so has the predella with the inscription about the donation.) The panel representing St Giles is the top quarter of the external wing on the right, its rounded corner following the line of the arch of the central picture.

The hermit, who lived in a forest, was nurtured by the milk of a tame hind. The king's huntsmen pursued the animal, but when the saint interceded with the hunter he aimed his arrow at the holy man and instead of wounding the deer it pierced St Giles's breast. This moment is recorded in the painting. The saint bears the pain with a meditative, pious countenance. The arrow is depicted in the picture twice, perhaps because a single arrow rushing in the air may have introduced too great a tension and lack of balance into this lyrical scene. The hind taking refuge with the hermit is also characterized by calm stillness. The artist may have used a drawing from a model-book of the period for this work, which is indicated not only by the calmness of the animal as if it were part of a still life, but also by its movement: the model of the animal looks as if it had been drawn with all four legs underneath it, but the painter, adjusting the model to the painting, represented its right foreleg stretched out. Though the hunter s figure is much smaller than that of St Giles, the lines of the rock in the foreground and the light colours of the foliage of the forest seem to lead one's eyes to him. In accordance with the style, which had a predilection for elegant, curving lines, the painter stressed the impressive and buoyant line of the bow, which is beautifully set off by the darkness of the forest.

In the international life of King Sigismund of Luxembourg's court at Buda, Thomas de Coloswar had an opportunity to become familiar with the leading movements in painting of the period. The panel representing St Giles has similarities to Bohemian art. The rocky, wooded landscape - to quote Antal Hekler - "the colour of a fairytale in spite of its awakening realism" reveals features akin to the art of the Master of Trebon and the illuminators working under his influence. 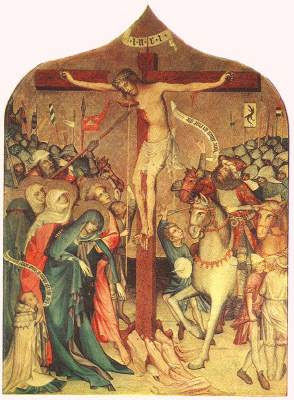 There are more pictures of the altarpiece here.

Now in addition to the fact that the first picture shows St Giles I have the added interest in the picture that the figure of the archer on the right appears to be taken more or less directly from a copy- book drawing now in the collection at the Christ Church Picture Gallery in Oxford, where I do part-time work. That drawing has been attributed to various possible masters and locations, and to a late fourteenth or early fifteenth century date. There is an article about it in 40 Years of Christ Church Picture Gallery, Oxford 2008, pp 64-5.