Yesterday, having seen on New Liturgical Movement the following photographs of the London Oratory, I decided, more or less on the spur of the moment, to go to their Mass of Thanksgiving for the Beatification of John Henry Newman. 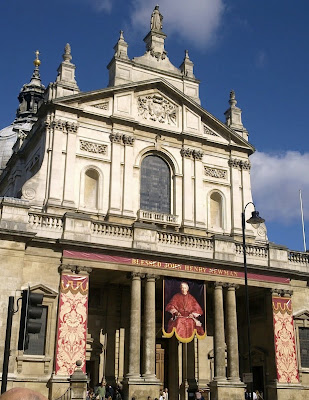 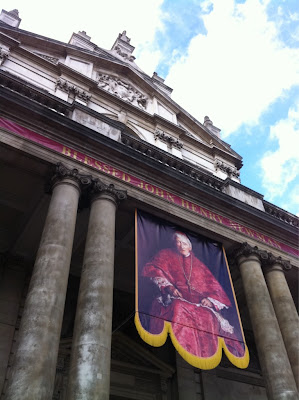 Similar festal hangings are also to be found beside the outdoor statue of Cardinal Newman which can be seen beside the Oratory church. Moving inside, you can not only see some of the red hangings which are to be found inside the church, do also take note of the image of Newman (and that of St. Philip Neri) to be found to either side of the High Altar. 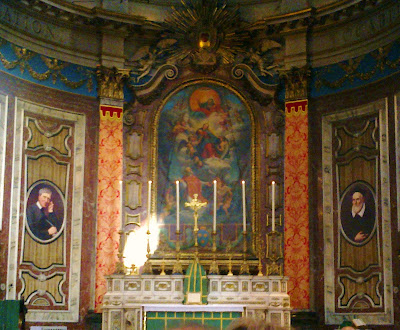 However I was bit late getting away from Oxford and had to sit in a very long traffic jam north of White City. I disembarked at Notting Hill and eventually found a taxi - the necessary extravagance I decided upon if I was ever to get to the Oratory before Mass ended. The taxi driver was 'interested in the etymology of the word `oratory' - he had once been inside Brompton and thought it very fine. Before we had reached the Natural History Museum we were on to the Knights Templars and The Holy Blood and thh Holy Grail... Happily we arrived at the Oratory before we got too far down that route, though I assured him that stuff was, as it is, all nonsense.

I got into the Oratory at the words of institution, but at least I was there. I was able to see the procession of the clergy leading the Archbishop of Westminster, carrying a primary relic of John Henry Newman, to the new Newman altar and chapel. Following the litany of St Philip this was blessed by the Archbishop.

As well as the primary relic placed on the altar a number of secondary relics were on display. These included a mitre given by the Cardinal to the London Oratory and the missal used by Bl. Dominic Barberi when he celebrated the Mass at which Newman communicated for the first time as a Catholic on October 10th 1845 at Littlemore.

Afterwards there was time to meet up with old friends and admire the new chapel and the hangings put up to mark the occasion.

I was delighted to see that St Peter, whose statue - a copy of the famous one in the Vatican basilica - is immediately in front of the Newman chapel, was wearing not only a white cope, but also a triple tiara. I knew this piece of Papal insignia was on order for the Oratory, but had not seen it in place before. Clearly the London Oratory has everything.
Posted by Once I Was A Clever Boy at 14:54