So I got up at 11pm to get ready for the big day. I decided this was definitely an occasion on which to wear my Newman Society tie, as well as Oriel cuff-links and scarf - which was also an additional source of warmth. I made my way through the last late night revellers to get to The Oratory by 3am for the coach - one of five from there, plus two from SS Gregory and Augustine. The journey was fine - along procession of coaches winding their way to Cofton Park along the motorway and through suburban Birmingham.

We arrived to find the organisation smooth and efficient , and once past the security checks, found the park well laid out for the occasion. There has been talk that many of the souvenir items were less than ideal, but the ones I saw were suitable and well designed, and reasonably priced. I bought a commemorative mug with the official, and I think, well-designed official logo. I like its confident representation of the tiara and keys. I also bought a paper flag to wave, which long before the Pope arrived had to be replaced as someone managed to put their portable chair on it when my pilgrim pack was on the ground. Later on, as we were leaving, I bought acommemortaive rosary with the Pope on the medallion. A friend who bought arosary earlier found it bore the image of John Paul II rather than Benedict XVI, and went and got it changed. We speculated if one could ask for, and what was the premium on, rosaries with Alexander VI, Innocent III or Boniface VIII?

A group of us found a good site from which to view proceedings, just where the ground began to rise, and facing the sanctuary area. So we settled in for the wait. it was still dark, it began to drizzle, but no matter... as I commented to one of our party, it was all because a fellow of Oriel had started reading the patristic writers...

Dawn came, it stopped drizzling, but the sky remained overcast, though the sun was trying to get through. As one strolled round the area, with its swelling crowds, one met friends, but in so large a crowd one failed to see the others with whom we had travelled from Oxford.

The big screens kept displaying quotations from Newman and from the Pope, and at one point earlier on there had been a film and slide presentaion of Newman's life - it seemed slightly odd seeing familiar places, including Oriel, on a big screen in the middle of the night, but there was awilling suspension of normality for the occasion. As time passed there was a quiet, but definite, sense of a happy expectancy, a rising enthusiasm.

I suspect most of us could have managed to live without the live radio programme being presented from the sound stage, with its guitar supported renditions of Newman's hymns, but it occupied the waiting time. It is only fair to say that the wait did not in reality seem excessive - one had time to find a base, get one's bearings and to prepare in some way for what was going to happen.

The sun kept trying to get through. Then the big screens announced that the Pope had left London by heliopter. We applauded and cheered the pictures of him doing so. Soon after we saw a helicopter circling. Was that him? ... No, it wasa TV one... No, Yes, that's the one. We cheered and waved our flags. Then...ths sun came out. All right, not quite Fatima, but it all seemed very auspicious.

As the clergy processed in we were spotting clergy we knew or recognised as they passed by on the central walkway. The Mass itself proceeded in a calm and dignified way. For events such as this it is clearly the necessary way to stage such events and this worked well, with dignity and gravitas.

Of course all eyes were on the Holy father - we were close enough to see him clearly with the naked eye as well as on the screens. What is clear is his presence, you watched because he is the pope, and because he is who he is. If one could say there was a high point for me it was the reading of the decree of Beatification - to be there and hear the Pope say that by his Apostolic Authority he decreed that John Henry Newman henceforth be counted Blessed, and then to see the projection change to reveal Newman's features was profoundly moving - as a Catholic, as a convert, as a historian of the Church, as an Orielensis. 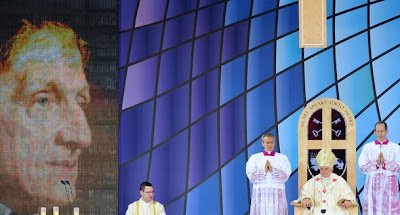 Believe me, I am on this photograph, along with a few others...
Afterwards, a sthe papal car left Cofton the sun went in and the weather was once more overcast. It could not have been scripted better, and summed up one's feelings as having been present on a very special occasion, and to have participate din atruly historic event
When we got back to Oxford several of us took the opportunity to pray at the new shrine to Bl. John Henry Newman in the Oratory church, and which was on show pending its dedication on Tuesday.

Over tea we watched live on television the end of the Pope's speech to the bishops at Oscott, his meeting with seminarians - including looking out for friends amongst them - and then the coverage of his journey to the airport and the farewell speeches. The coverage was impressive - I cannot think any other world leader would receive such attention with full, live coverage of his every public move. That is a testimony to the pulling power of the Papacy, and of this Pope in particular.
Looking back over four extraordinary days the overall impression I have is of awe, awe not merely at the schedule pursued by an 83 year-old, or at the warm and positive response from so many people here - at which I am not actually surprised - but renewed awe at the office of Pope, and at this particular Pope.
Pope Benedict XVI is a truly great man, patently holy and possessed of a vision he is impelled to communicate. I genuinely think he stands alongside the greatest of his predecessors in what he seeks to do. Long may he reign ... ad multos annos.
Who would not want to be in communion with Pope Benedict XVI - a man of transparent holiness, an upholder of Truth, the guardian of the world's moral authority, a man who has undertaken the defence of the Christian Church and heritage?