Mass of Thanksgiving at Oxford Oratory

Last night the Oxford Oratory celebrated the Beatification of John Henry Newman with a Mass in the presence of the Archbishop of Birmingham, his auxilliary Bishop William Kenney, the Abbot of Prinknash, and with representitives of Newman's colleges and the University, of the city and of the deanery.

At the conclusion of the Mass the Archbishop dedicated and blessed the new shrine to the new beatus. The account from the Oratory website is here. It includes pictures of the Beatification itself, and of the Pope's visit to The Birmigham Oratory. 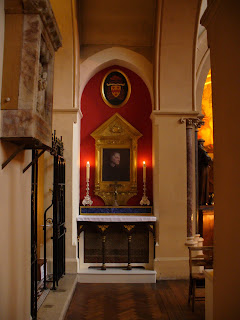 The Newman Shrine. The picture is a copy of the painting of the Cardinal done by William Ouless, and still at Birmingham. The aedicule is by Timothy Newbery, the achievement of arms by Tom Meek.
(Picture from the Oratory Appeal website)
The Oratory's relic of Bl. John Henry was taken in procession to the shrine by the Archbishop. To see something about how this was prepared read the post here.
Posted by Once I Was A Clever Boy at 10:54