I posted recently that I had attended Sunday Mass at St Dominic's in Downham Market. Joe Shaw has some photographs of the church and something about it on his LMS Chairman blog. He visited it as part of a walking pilgrimage to Walsingham. I am copying his section about the church in Downham Market, and the work Fr Eggleston has done to enhance the appearance of the building.
Joe Shaw says:
The Catholic church of St Dominic at Downham Market ... is where the notorious Fr Oswald Baker refused to say the Novus Ordo from 1970 to 1975, when the Diocese took back control of the church; incredibly, he continued to live at the Presbytery, saying Mass elsewhere, until 1989, forcing his replacement to live down the road.

The church started life as a stable; since Fr Baker's time it has been extended, sideways. The altar was originally on the left wall, where you can just see some votive candles. 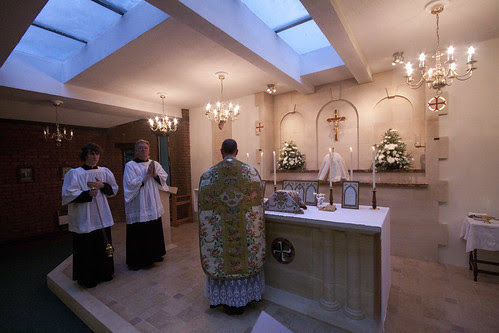 The present Parish Priest, who is just about to leave, Fr Edmund Eggleston, has done great things to the sanctuary, which was little more than a wooden table in front a brick wall before. The limestone is all due to him, including a good permanent altar, which allowed the church to be formally consecrated for the first time. (Wooden altars are always classed officially as 'temporary'; a church with one can be blessed, but not consecrated.) 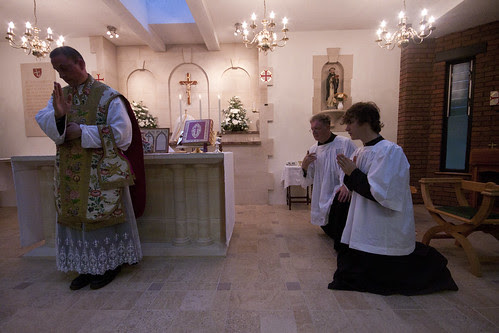 The Mass was of St Bernard; the fine vestments belong to Fr Eggleston.

The patronal statue of St Dominic, on the right, reminds us of the Dominican Sisters who initiated regular Catholic worship in Downham, in a chapel carved out of a large house next to this site.

I would endorse Joe Shaw's comments - what has been achieved at St Dominic's is a handsome setting for the liturgy in a somewhat unusual plan. It shows what can be done to enhance a church building.

I was recently listening again to my ancient recording of "The Mass at Downham Market" - the famous recording of the last mass in the Church before Fr Baker was anathematized by the apostate bishop for being a Catholic.

His sermon on that occasion was a powerful defence of Latin. Here is an extract:

"As Our Lord used beautiful parables to veil His precious truths, so Latin keeps a decent and beautiful veil over what is enacted by the priest at the altar. To read the Epistle and Gospel in English is to lift that veil somewhat, without yet casting it aside, bringing everything down to the level of the commonplace, exposing all to the general gaze. The truth about the Canon of the Mass, whose English version has been so hotly disputed, is that it most probably just cannot be satisfactorily translated out of Latin into any other language suitable for public recitation aloud. Does that really worry anybody? The Latin Mass has always been loved as it is, without question available in English if wanted, in bi-lingual missals, or if they prefer, those at Mass have always been free to pray their own prayers.

"Centuries of Latin has not, that anyone knows, alienated any soul, or caused charity to grow cold in any. The Church has kept the Catholics of the world united by the use of a single language, and if that bond goes, not only unity, but much else besides is immediately imperilled."

What a great Catholic hero priest!