Day II of the Papal visit, and I am going off to London to see the Holy Father.

Of course I had not allowed for the traffic disruption caused by the visit - and so a long frustrating wait in the Oxford Tube on Park Lane, convincing myself that I was going to miss seeing His Holiness etc...

A very brisk walk along Victoria Street took me to Westminster and the crowd outside the abbey. There I spotted Fr Tim Finegan complete with camera recording events for his blog. I found the friends I had arranged to meet opposite the north transept and outside the old Middlesex County Hall(aka the Supreme Court),and was promptly provided with a yellow and white flag to wave. Indeed I had no sooner arrived than I was asked why I had come by a journalist from the Financial Times for their online comments. I granted them an interview, saying I had come as a Catholic both because the Pope is the Vicar of Christ and because I have enormous admiration and respect for the Pope as a leader and thinker. I was also asked about the media coverage. I said much has been negative but that it seemed to be improving.

After a while we began to see assorted Catholic and Anglican prelates walking into the abbey north door, and shortly after the Popemobile, and much more importantly, the Pope came into view. Yes, the journey had been worthwhile.

As the Holy Father moved on the crowd began to move and re-form. Hearing a loud cry of Viva il papa behind me I turned to find a family of friends from Oxford and the London Oratory. Shortly afterwards I came across Kevin de Athaide, another Oxford friend and now a seminarian at Allen Hall. who having seen the Holy Father at Twickenham he had walked down to Westminster. I also ran into another freind who is currently an Anglican seminarian.

Moving along Broad Sanctuary and into the area with both vociferous Catholics and the Protestant Truth Society some of my friends attempted to engage in dialogue with the latter. This, from experience at Walsingham, I realise to be largely futile - "proof texts" are quoted in a random and way as slogans, with no attempt to expound a case. Mind you there was one "Mad Catholic" lady who outdid them in volume and, possibly, eccentricity...

Looking around I saw Laurence England, author of That The Bones You Have Crushed May Thrill, and whose account of the afternoon you can read here. We greeted one another and I congratulated him on the piece I linked to in my last post. I then met up again with his parish priest, Fr Ray Blake from St Mary Magdalen, Brighton. His description of the event is here. Fr Blake was having some success in talking to one of the Protestants - at least they were talking, and along the way the issue of indulgences came up. Fr Ray was saying we wanted an indulgence; I suggested to him that given who was just across the road we should ask for a Plenary Indulgence. So a few of us started the chant "What do we want? A Plenary indulgence! When do we want it? Now!"

Two Spanish speaking girls were meanwhile making valiant efforts to hold their long banner bearing the text "Heart Speaks to Heart" or something similar in front of the Protestant Truth Society's banner. The whole sensation of being in this jumbled crowd was slightly unreal, but it was a case of "Tis good Lord to be here", even though it did mean missing live coverage on television of the Papal address in Westminster Hall or the service in the abbey.


Meanwhile inside the abbey: 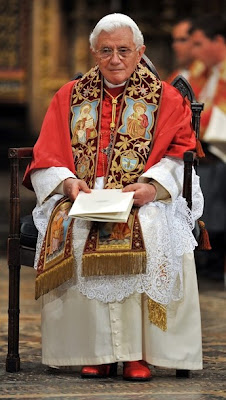 From these pictures it appears that the Abbey authorities has uncovered the marvellous thirteenth century Roman cosmatesque Sanctuary pavement for the occasion - a very dignified and gracious compliment to the Pope.
We saw the west doors opening and then the abbey bells started pealing and the pope and Archbishop emerged into the fading light. We cheered and waved our flags again. 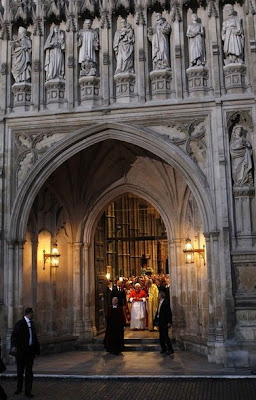 The Papal party departed and three of us made our way up Victoria Street amidst a crowd of pilgrims and the remaining protesters, and not a few archbishops and bishops scattering outwards from the abbey.
I reflected afterwards that one of the Protestant protesters had had a placard citing the 39 Articles that the Mass is a "blasphemous fable and a dangerous deceit." Having seen the Holy Father and hearing his message over the years my answer is to say, kindly, but firmly, to Anglicans "Tear up the 39 Articles - you know you want to. Rome is the answer."
Posted by Once I Was A Clever Boy at 13:22