Yesterday was the third anniversary of Summorum Pontificum. The blogs seem to have quite a bit about the fact and the Catholic Herald has an online debate on whether the Papal initiative has been successful. The very fact that the Pope issued it is a thing to continue to be grateful for - I recall celebrating with modest glass of champagne back in 2007 - and I am thankful for all that has been achieved in consequence of the Holy Father's initiative.

Like many others I would like it to have had greater impact already, but a great deal has been achieved, and solid progress made. A great deal has been achieved and a great deal recovered for the liturgical life of the Church. In this country it is clear that some dioceses are more favourable than others, and that in some places the laity are more responsive or pro-active than in others. This may not entirely be the responsibility of individuals in the clerical hierarchy - it may be that there simply is not, at present, a constituency for traditional forms in certain areas. The reasons for that may be complex. Resolving then may require not only practical action but also research to understand developments over the last half century and maybe longer.

With both clergy and laity it is partly, though by no means entirely, a matter of different generations. The signs of a favourable attitude towards the Extraordinary Form amongst younger clergy and religious, as well as laypeople is very encouraging. The success of the various training conferences in this country is very hopeful, as has been the support given at an international level by leading members of the Curia. The New Liturgical Movement has some very positive stories today, including Cardinal Canizares at Wigratzbad for the ordinations there, a Usus Antiquior parish being established in Dayton, Ohio and a well attended EF Mass at St Charles Borromeo in Hull, of which the following is one of the photographs: 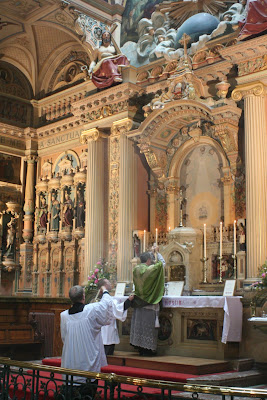 A few years ago such a restoration would have been barely imaginable. A great deal has been achieved.

This is despite some bishops seeking to claim a power to control the application of in their dioceses, and a sense that in not a few places the Papal motu proprio has never been heard of - that seems to include large parts of some avowedly Catholic countries.

To some extent supporters of the traditional liturgy have been over-optimistic as to the response of others, and now feel disappointed that more has not already happened. The zeal of some may indeed have intimidated members of the hierarchy, who themselves feel unsure about celebrating Mass in front of what can be so critical an audience. For some of them it must also be a shock to the system to see the return of that which they had, for whatever reasons, assumed belonged to the past. "We don't do that anymore" can now be answered with "Yes we can", and indeed "Yes we will."

On the whole I am optimistic, but I also feel impatient to see more achieved - but that may just be me. We should give thanks for what the Pope has given back to us, and work to make it more available. Traditionalist minded Catholics need to cultivate further the arts of positive evangelisation in these matters. I stress the positive aspect - simply denigating much that does indeed deserve denigration in contemporary liturgical life may relieve the feelings, but it may not achieve much more. The continuing positive promotion of the Extraordinary Form, as is being done by organisations and authors, but by all who support it, can, I am sure bring real benefits to both individual souls and the life iof the Church. That may be the way to cure impatience and the causes of impatience at the same time.
Posted by Once I Was A Clever Boy at 11:34