Whilst finding today's readings in the Divine Office I was struck by yesterday's second reading at Matins - I had read that proper for St Maria Goretti rather than the ferial one. That is from St Augustine's Discourses on the Psalms. In it he addressed as brothers those outside full communion, and sought ecclesial reconciliation with them. He was obviously thinking of the Donatists of his day, but the passage seemed highly relevant to contemporary concerns. 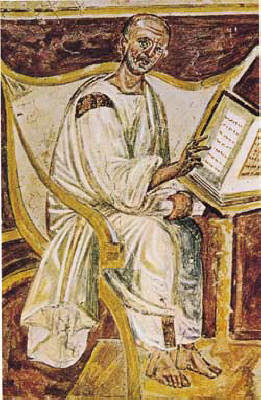 The earliest surviving depiction of St Augustine - a sixth century painting from the Lateran
Next week the General Synod of the Church of England is due to debate further the plans to consecrate women bishops, and this may prove to be the crucial meeting in that process as far as traditional Anglo-Catholics are concerned - but then, it may not. Nevertheless St Augustine's concern to bring into the one true fold those outside who shared so much with him was palpable, and appears apposite to the situation of not a few Anglicans today. I hope and pray that contemporary Catholics share the same concern for ecclesial unity, and do all they can to bring those who think as they do into full peace and communion. I rather fear too many Catholics do not understand the experience of traditional Anglo-Catholics, and are inclined to see Anglicanism as possessing a coherence it has not possessed since at very least the time of the Tractarians
Wednesday next week is also the 177th anniversary of John Keble's sermon which was seen by Newman and others as inaugurating the Oxford Movement. As Newman approaches beatification this year let us do all we can to realise more fully that vision - by no means clear in 1833 - of the true unity of the Church. It was, of course, the similarities between the claims of Anglicans vis-a-vis Catholicism and those of dissident groups in the early Church which led Newman to begin to reconsider his position after 1839.