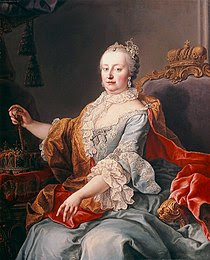 Another book I finished over the weekend was Edward Crankshaw's Maria Theresa, published in 1969. Crankshaw, who had been a journalist, wrote several books on the Habsburgs which are eminently readable. The book is aimed at the general reader, and, if it has a weakness, it is a tendency to write in a slightly sweeping journalistic style rather than the more measured tones of the historian. Nevertheless it is a good biography of the Empress, and was the first full-length one to be written in English for sixty years.
Crankshaw was clearly very fond of the Empress, and with great respect for her achievements. She emerges to the reader as combining not a few of the qualities of Queen Elizabeth I, Queen Victoria and Margaret Thatcher. To follow the methodological approach of Sellers and Yeatman she was a Good Thing - indeed at times a very Good Thing.
The copy I read was the paperback edition of 1982 which lacked illustrations - which gives me the excuse to include a couple of portraits of the Empress. 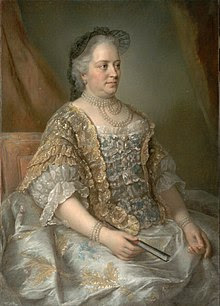 Maria Theresa in 1762, by Jean-Étienne Liotard.

Dear John Whitehead,
It is I, Betsy Fitzmeyer, one of your thousands of students - Michaelmas Term 2001 - Arthorian History. I'm working on a novel based on my studies with you.
Great to see your web site.
I'm on facebook, as well as at etsybay2@hotmail.com. A profile of my other novel is available at www.filedby, or AMAZON.

Very good to hear from you again. I will write off-line. Please keep looking at the blog!