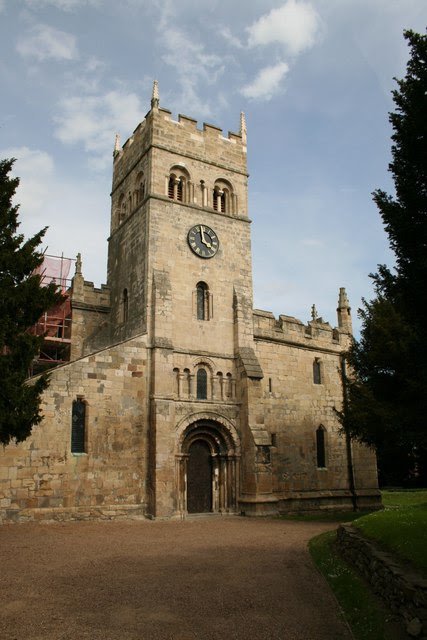 St.Mary Magdalene, Campsall
© Copyright Richard Croft and licensed for reuse under this Creative Commons Licence.
Further to my post last Thursday, here, in addition to some pictures of Campsall church, and as promised, is the inscription I referred to.

The rood screen [which is, I think, later fifteenth century*] has the following inscription at the head of the dado and below the openings, being transcribed by Morris on 15 July 1909:

Lat fal downe thyn ne, & lift up thy hart:
Behold thy Maker on yond cros al to to[rn]
Remember his Wondis that for the did smart,
Gotyn withowut syn, and on a Virgin bor[n],
All His hed percid with a crown of thorne.
Alas! man, thy hart oght to brast in too.
Bewar of the Deuyl whan he blawis his hor[n],
And prai thi gode aungel conne the.

Morris says he transcribed with care, but added the punctuation. The letters in [ ] are absent, not merely illegible. In one case (hor) he noted the usual mark of abbreviation: a superscript - above the o. I think that defeats me as a blogger.

An early twentieth century view of the church interior showing the screen
With reference to the Devil's horn - according to Joseph Hunter - History of South Yorkshire, (2 vols 1828-31), ii, 468, the Devil was often represented with a horn in the middles ages, and he gives a quotation from the "Shepherd's Kalendar", first published 1579, but the same idea is found as late as the prologue to "Grim, the Collier of Croydon" (?c.1662)
But has enough at home to do with Marion:
Whom he so little pleases, she in scorn
Does teach his devilship to wind the horn
I have a feeling that this quotation from "Grim" may be more obscene than Morris realised - but that may say more about me! The Devil's horn is, of course, the anti-type of the trumpet of the Archangel Gabriel.

Now the real interest of this inscription at Campsall is two fold.

Firstly it must have been painted to make it legible - today it looks like a piece of decorative carving, given its cramped setting and black letter form. So here is further proof of the use of colour in medieval church decoration.

Secondly it assumes a reasonable degree of literacy from the average worshipper in this West Riding church in the late middle ages as they kneel before the rood screen, with the Rood above.

The Campsall screen is, to my mind, a wonderful illustration of the points Eamon Duffy made in The Stripping of the Altars, and why, with all due respect to Professor Duffy, whom I greatly admire and respect, I was in no way surprised, unlike so many other historians, by the evidence he adduced for late medieval popular piety in rural as well as urban England. 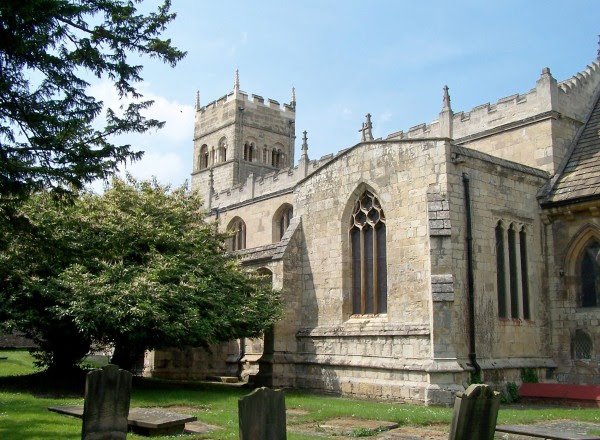 * Some people have suggested that the screen did not originally belong to the church but was brought from iis monastic improprietor, the nunnery at Wallingwells in north Nottinghamshire. Not only can I not believe such a journey would have been made - it must be thirty miles or so - and it is not like moving furnishings from a dissolved monastry to the neighbouring parish church - as did indeed happen - but the screen clearly fits the church. For it to be moved and fit would be a remarkable coincidence indeed. Such an idea betrays an underlying disbelief in what was lost from quite ordinary English parish churches in the sixteenth century and later.
Posted by Once I Was A Clever Boy at 09:46