Fr Hunwicke has been suggesting which team his readers should support in the World Cup Final, and attracted a number of comments to his post.
Not being one to totally hide my light under a bushel I though I would republish the comment I contributed here in my own blog:
Although I loathe and abhor football, certainly so in the case of the professional game,like you I am inclined to support the Spanish team, if only for historical-cultural reasons. Your post conjures up a new historical interpretation of the Revolt of the Netherlands as a football match. The teams captained by Philip II and William of Orange, with Philip's new striker in the Duke of Alva, whilst the Dutch have such English signings as Sir Philip Sidney and the Earl of Leicester. Of course they have the problem of Egmont and Horn being sent off early in the first half, and their captain the Prince of Orange during the second.The Spanish may have scored the occasional own-goal during the match. The result - a score draw?

Here are the two team captains, but not in the appropriate modern football kit: 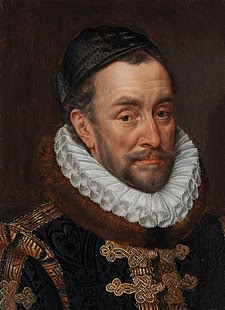 Prince William of Orange
Perhaps I should add that thought that, given his name, William the Silent was a reporter's nightmare in the post match interview.