I find these days that I usually have several books "on the go" at the same time - which inevitably tends to mean finishing them takes longer than reading them individually. 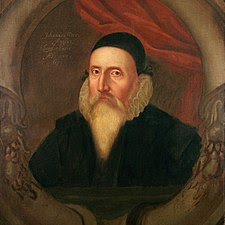 A sixteenth-century portrait of John Dee
by an unknown artist
One of the books I finished reading over the weekend was Benjamin Woolley's The Queen's Conjuror, a biography of the Elizabethan philosopher-magician Dr John Dee. This provides a fascinating insight into the intellectual world of Elizabethan England and much of contemporary Europe. What quite one is to make of John Dee and his various "skryers" - mediums - is unclear. Was Dee naive or self- deluding, or is there something in the Enochian language of the angels? A seventeenth century marble copy of his 'Holy Table', on which the crystal for the medium's use rested, and marked out in Enochian characters, can be seen in the Museum of the History of Science here in Oxford.

Dee was a mathematical scientist of his times, hence he both anticipates the developments of the future, but also was fascinated by a complex scientific astrology, and by the search for a unifying metaphysical basis for society. He was certainly Christian, but had left traditional confessional doctrinal certainties behind in a quest for what was, essentially, a gnostic set of answers to, well, everything.

John Dee's career is extraordinary, and the characters around him a very curious group, and notably so Edward Kelley, his most remarkable "skryer". By the time they had finished their time together they had, apparently, even got into wife-swapping - so that may (but may not, of course) make you want to read this very interesting book. I would recommend it - it is written for a wide readership.

In the absence of the book there is a good online introduction to Dee here.
Posted by Once I Was A Clever Boy at 10:58